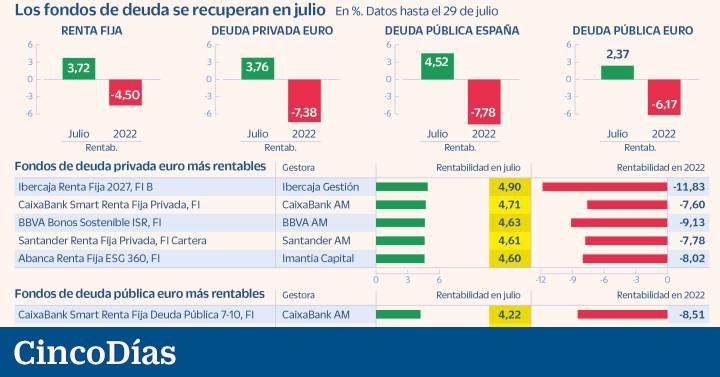 July’s performance in fixed income has vindicated those who thought it was time to take positions after the sudden falls seen so far. The bond market is still a long way from shock-free, but the month of July gave us valuable breathing space, posting gains of almost 5% at best, quite an achievement for this type of asset. However, not enough to offset the high losses accumulated so far this year.

The profitability of pension funds marketed in Spain was 3.72% in July, according to data collected by VDOS. The gain extends to 4.52% for those investing in Spanish government bonds, remains at 3.76% for eurozone private debt and 2.37% for European sovereign debt funds.

The returns are explained by the sharp fall in yields on fixed income assets over the month, which has allowed their prices to rise. Investors had heavily discounted an acceleration in central bank rate hikes to deal with high inflation, even at the expense of growth. This fear sent bond yields soaring in tandem with their price decline. However, the market is now beginning to believe that central banks will moderate policy tightening and rate hikes following the rate hikes announced back in July, in a difficult balance between fighting inflation and protecting growth. The result is that euro-zone government bonds returned 4.1% in July, the highest one-month return on record, according to the index compiled by Bloomberg.

Spanish government bond fund yields of 4.52% in July reflected the notable decline in Spanish 10-year bond yields over the month, falling to 1.9% from 2.5%.

CaixaBank Smart Fixed Income Public Debt 7-10 ranked first in the ranking of Spanish government bond funds’ profitability in the eurozone in July, up 4.22% on the month. And in the first positions also appears the latest bet of the manager of the bank, the CaixaBank Public Debt Spain Italy 2027, which was launched precisely to benefit from the fall in the price of government bonds of both countries and which has rented 2.2% in July.

CaixaBank’s commercial fixed income offensive has seen it become the manager with the most net subscriptions in July with 365.6 million euros, after achieving 900 million subscriptions for its new vehicle sovereign bonds of Spain and Italy in May.

The profitability ranking of the family of Spanish private pension funds in the Eurozone shows higher yields than government bonds. The most profitable is Ibercaja Fixed Income 2027, up 4.9% in July, followed by CaixaBank Smart Private Fixed Income, up 4.7%, according to VDOS data.

Their good performance is far from making up for the accumulated losses in 2022. Despite returns in July, these two funds, the best-performing in their category, are down 11.8% and 7.6% respectively so far this year.

subscriptions. Despite the poor performance of bonds, investors have poured fresh money into bond funds, a trend that has continued into July, a month that has finally produced positive returns for the asset. Net subscriptions to bond funds last month were €757 million, according to Inverco data. And for the full year, they add up to 8,638 million inflows, making debt funds the undisputed leader in deposits. The international stock market follows in second place with 2,210 million net subscriptions so far this year.

Long-term liabilities. On the debt side, long-term fixed income funds raised almost 2,000 million euros in July, compared with repayments of 1,400 million for short-term funds and total net inflows of 8,500 million for the year.

Previous articleAfter 7 years + a child: love off with ex-GNTM candidate Vanessa Tamkan and her husband Roman
Next articleWHO is asking €121 million from donors to respond to the health emergency in the Horn of Africa