Crude falls close to US$103; Focus on Russia-Ukraine talks 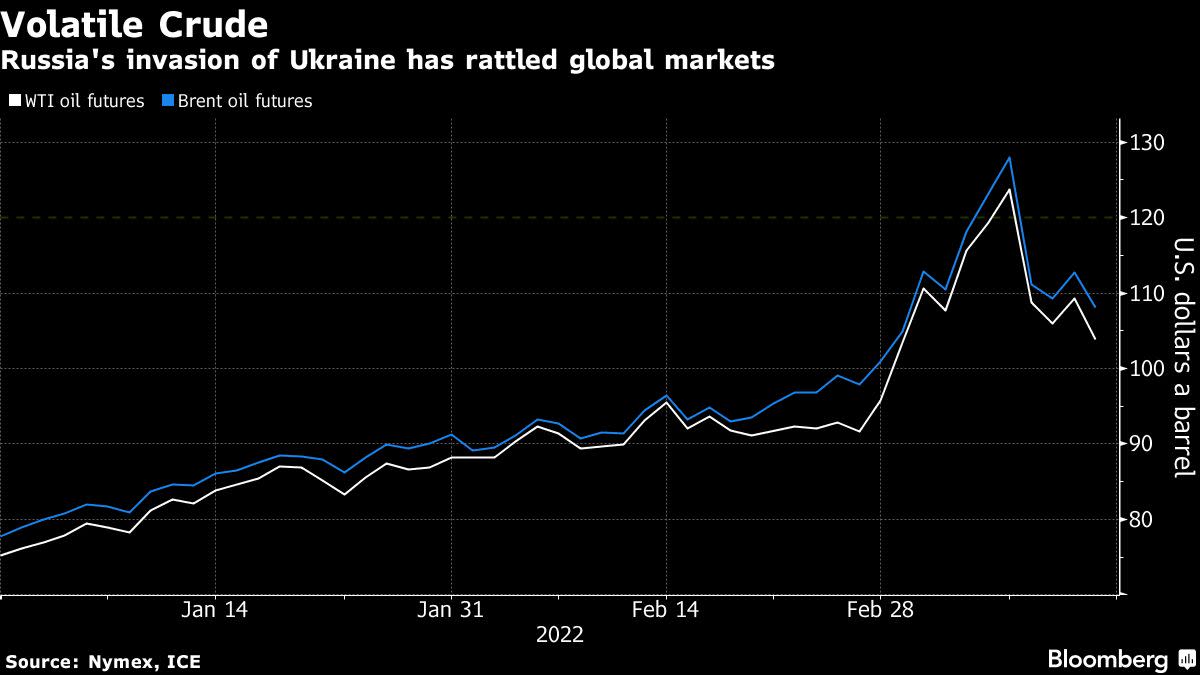 (Bloomberg) — Oil slipped as talks between Russian and Ukrainian negotiators showed some signs of becoming more substantive as China grapples with a major Covid-19 outbreak.

Futures in New York fell about 6% and traded near $103 a barrel. The war in Ukraine has roiled commodity markets, from crude oil to grain, prompting buyers to shy away from Russian oil as they dodge sanctions.

The new round of talks between Russian and Ukrainian officials on Monday focused on discussing a possible ceasefire with an immediate troop withdrawal and security guarantees, Ukraine’s negotiator Mykhailo Podolyak said, though he called it a “difficult discussion.” . Over the weekend, Moscow stepped up shelling of western areas near the Polish border. Senior US and Chinese officials were meeting as the US tried to enlist China’s help in ending the invasion.

There are also some risks to demand. China confined 17.5 million people in Shenzhen for at least a week amid a surge in COVID-19 cases, and asked residents of Jilin province not to travel, the first time the country has locked down an entire region. from April 2020.

A lot of diplomatic efforts are going on to try to stop the war. A top adviser to Ukraine’s President Volodymyr Zelensky said “ongoing” talks with Russia were taking place via video, while Russian President Vladimir Putin met with his French and German counterparts after speaking with Zelensky. US Secretary of State Antony Blinken also held talks with the Ukrainian Foreign Minister.

That heralds the start of a very active week that will test whether Russia plans to pay down its international debt and will likely see the Federal Reserve raise interest rates for the first time since 2018, which could strengthen the dollar. The resurgence of the virus in China is also causing some concerns about oil demand, while the Fed’s decision on interest rates is due on Wednesday.

The prospect of additional oil supplies from Iran quickly easing a tight market faded on Friday after Tehran and world powers called off talks to restore a nuclear deal. Russia sought assurances from the US that sanctions imposed for its invasion would not affect its previous partnership with the OPEC producer. Iran carried out a missile attack on Iraq after the negotiations broke down.