Cristóbal Belda, doctor: “It is absolutely unacceptable that people with higher incomes live much longer” 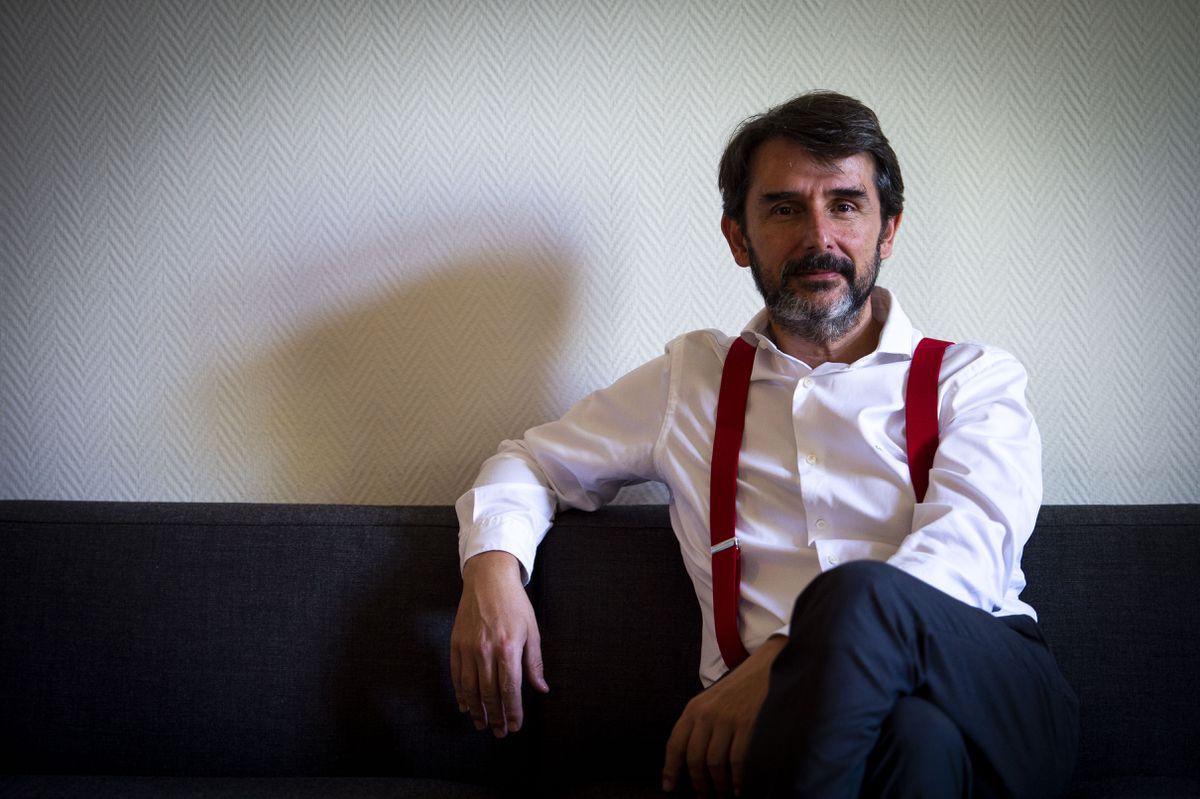 The doctor Christopher Beldaspecialized in lung and brain cancer, has headed the Carlos III Health Institute, the most important biomedical research organization in Spain, for a year the fourth in Europe. Born 50 years ago in Murcia, Belda is a talkative oncologist who cut his teeth at Madrid’s La Paz Public Hospital where he was battling golfer Severiano Ballesteros’ brain tumor and has been back and forth between public and private medicine ever since has jumped. The Doctor, a big fan of the British band of heavy metal Iron Maiden, captain of a giant with nearly a thousand workers and 559 million euros Budget, located in the shadow of the four towers of Madrid.

Questions. You are an oncologist and until four years ago you were a manager in the private healthcare group HM Hospitales. Every second man in Spain and almost every third woman will develop cancer in their lifetime. If it were your turn, would you treat your cancer in a private or public hospital?

Answer. I have not the slightest doubt about a public one.

P I was an oncologist at a private hospital.

I would treat my cancer in a public hospital, I have no doubt about that

P You has explained that we cannot allow a person’s money to be the most important determinant of their health. Is it right now?

R Yes, not just health. A study has just been published that states that students are three centimeters taller. Income affects both your health and extremely reliable indicators such as height. If one compares life expectancy, there are differences of many years between the highest and lowest incomes. That can’t be, that’s absolutely unacceptable.

P The latest mortality map in Spain, neighborhood by neighborhood, showed that in some streets the risk of dying from cancer increases by as much as 50% from sidewalk to sidewalk.

R It changes completely. There is also a factor that is hardly considered: the healthy life years after 65. You can lead a healthy life up to 50, simply for biological reasons: You don’t do much, you don’t smoke, you do a little sport and eat reasonably well. But after a certain age, when biology no longer protects you, it is your social determinants and income that determine whether you live more or less healthy years. And that can’t be. If you look at the data by province in Spain, you can see what is happening in the south and in the north: there is a huge inequality in healthy life years after 65. And there is inequality not only by region and income, but also by gender. It’s tremendously disturbing. There is a general notion that women live longer, but in lower-income areas this difference is narrowing.

P On the website of the largest supermarket chain in Spain, Mercadona, four donuts cost 1.35 euros. Four peaches cost twice as much. Four kiwis, also double. Four bananas, two euros. The liter of Coca-Cola, 0.8 euros. Junk food is much cheaper than fruits and vegetables. How is this reversed?

R Basically, it can’t be that it’s cheaper to buy fries than a salad. Can not be. Our colleagues in other agencies are developing all the legislative capacity to deal with it. What we do is give notice. The Spanish strategy against child poverty includes a plan against childhood obesity. We go to certain areas of Spain and the new form of poverty is not thinness but obesity.

Would anyone think of giving a child cigarettes? Well, don’t feed him ultra-processed food either.

P do you mean the south again?

R No need to go south. We can go to the south of Madrid. What cannot be is that a father who wants to give his son the best food cannot because his income does not allow access to fruits, vegetables, fish or fresh meat. This is absolutely unacceptable. dr Valentín Fuster, in a presentation he gave us at the National Center for Cardiovascular Research, identified the first coronary lesions in adolescence. Childhood obesity and child poverty are closely linked, and this will mean that we will have people with heart attacks at ages we would never imagine. see you today

R My wife is a cardiologist, hemodynamicist. They call her at three in the morning and she has to go stent [un dispositivo en forma de tubo para evitar obstrucciones en un vaso sanguíneo] to a patient. She is shocked by the number of heart attack patients at the age of 45. This is already happening. We have an indicator, which is childhood obesity, and we have a shopping basket where it’s a lot cheaper to give away food that will cause a heart attack 25 years later. This cannot be allowed. It’s like selling cigarettes to minors. Would anyone think of giving a child cigarettes? Well, don’t feed him any ultra-processed food because the health implications for this kid are the same. We need to realize that ultra-processed foods have health effects similar to those of a cigarette.

P Give an example of ultra-processed foods.

R The industrial pastry. I’m an oncologist, I have a lot of dead bodies on my back. A lot. We know that hypercaloric consumption, smoking and alcohol cause problems 20 years later.

R They don’t give us any money. In any case, I think it is important that companies try to develop healthy products within their industrial interests. Innovations for health are always positive. And if this innovation is carried out by scientists, then much better. I think the food industry is very aware of this and is evolving.

P You published the book a decade ago Pharmacoeconomics for medical oncologists. There is now controversy over the price of some of the most advanced cancer treatments, such as the so-called CAR-Ts sold by pharmaceutical companies Gilead, Novartis, Bristol Myers Squibb and Janssen, which cost more than €300,000 per patient. However, the Hospital Clínic de Barcelona has released a public version of CAR-T that costs around 90,000 euros. There is a difference of more than 200,000 euros per patient between the public and the private option. How is it possible?

R Pharmaceutical companies have a legitimate aspiration to generate returns for their shareholders from products that improve people’s health. A very different thing is academic science, where it is not necessary to generate profitability for any shareholder, but rather we measure profitability in terms of increasing survival, people’s health and so on. The public sector plays a central role in the development of novel therapies. We have to develop – and the PERTE [proyecto estratégico para la recuperación y transformación económica] for cutting-edge health, it indicates this – an infrastructure that allows the various academic groups interested in developing advanced therapies to bring in the idea on the one hand and take out the developed product on the other.

P He says it’s obviously legal to make money, but is it legal for drug companies to make so much money off CAR-T treatments when we’re talking deadly cancer?

R In the end it’s the market and what can I say about that. Everyone does what they think is appropriate with their products. Our path is to ensure that the academic sector, which has the capacity and has already proven it, has the infrastructure to be able to produce advanced therapies at the highest level. What a pharmaceutical company does, fantastic as long as it conforms to the laws of the market and to what has been determined by the Interministerial Commission on Drug Prices. We have nothing to say.

P You were a corporate director of German pharmaceutical company Merck for a year. One of its top-selling drugs is for colon cancer erbituxthat when it came out, it cost around 15,000 euros per patient. Merck’s net income in 2021 was a record, increasing 54% the 3,100 million euros. For a company that sells cancer drugs, does it make sense to increase its profits by 54%?

R Merck is a holding company which includes not only the pharmaceutical products part, but also a chemical part that produces a large amount of materials for other manufacturers. It also has a liquid crystals department, for example for television screens. I no longer have any relationship with this company and understand that there will be global benefits for a multinational company that is gigantic thousands of jobs and dozens of factories around the world.

P The Carlos III Health Institute and the Spanish Anti-Cancer Association signed a founding agreement in December the Cancer Epidemiological Information System in Spain. It’s amazing that it didn’t exist yet. In fact, there is no national cancer registry in Spain. How is it possible?

R There are different registers, like that of Girona or Granada, but they are very interesting initiatives from different provinces or entities there is no national register. It would be something tremendously important. We can provide the scientific knowledge to design a register of these characteristics, but the real capacity to implement this register lies with the autonomous communities together with the Ministry of Health. I believe that it is in the will of the Ministry of Health to move forward on this.