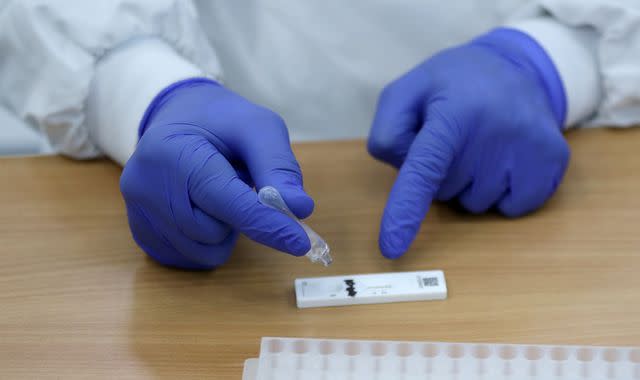 A COVID expert accused ministers of “wanting to dump the data and move on” as cases across the UK rose by nearly 50% over the last week.

The COVID Infections Survey, carried out by the Office for National Statistics, has also shown a rise in cases across the UK, which Health Secretary Sajid Javid said was “expected” following the relaxation of restrictions. in England at the end of January.

Travel rules have also been removed, with passenger locator forms and tests for arrivals. no longer needed from friday morning.

Speaking to Sky News, Tim Spector, professor of genetic epidemiology at King’s College London, said he was concerned the restrictions were being rolled back.

Accusing the government of “wanting to ditch the data and move on”, Professor Spector said the ZOE app, which King’s College London works with to record daily COVID figures, was now being “canceled”.

“It’s a bit ironic that they’ve canceled the Zoe app, it’s like they just want to get rid of the data and move on.

“Other surveillance tools have taken the axe, which means we’ll have fewer eyes on the ground and less radar in the next variant.

“At least ZOE has agreed to fund us until we get more funding, it will continue, but we need longer-term help to do that.”

He went on to warn that ZOE was seeing large increases in the number of cases among older people.

Professor Spector said: “We are seeing a real increase in older people getting COVID, and I think that will start to put pressure on hospitals.

“It seems very difficult to stop Omicron, especially his new form, Deltacron. He will reach 250,000 per day soon.”

Javid said a “handful” of cases of the so-called deltacron variant had been identified in the UK, but they were “not of particular concern”.

It added that 99.9% of UK infections are of the Omicron variant.

Javid told Sky News: “We are keeping the situation under review very carefully.

“There is no other variant of concern that is an issue at this time.

“We have seen some increases in infections over the last week, but given the increase in the social mix, this was to be expected.”