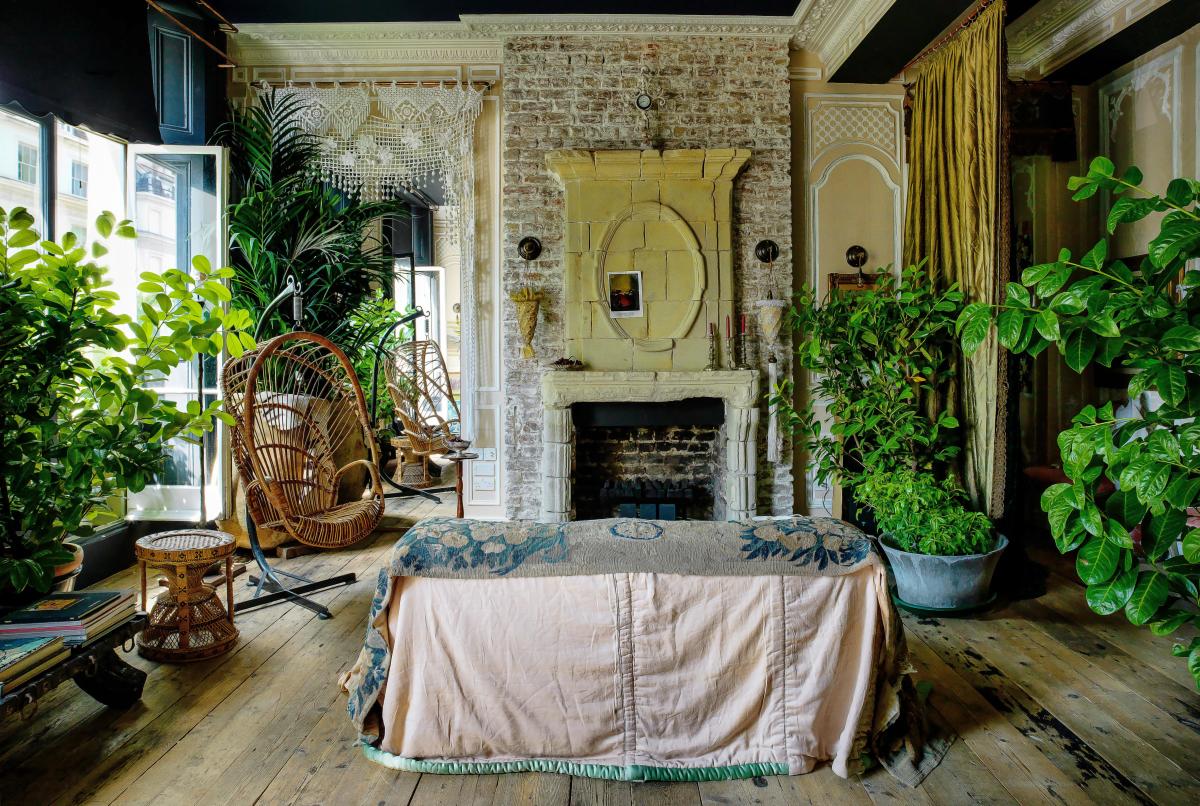 As a teenager, Sera Hersham-Loftus expressed herself in two different ways. The first was on her clothes: Victorian camisoles mixed with creepy eyeliner for a Siouxsie Sioux gathering. Tess of the D’Urbervilles effect (this was in the 1980s). Decorating was the other. “I was always painting my bedroom walls and moving the furniture around. I borrowed my mother’s scarves and hung them over lampshades for a romantic effect.” All of this was an escape from “the strict and depressing formality” of her girls’ school.

School was not for her: “I was the joker in the class; always answering “”, so she left at 15, relieved to be able to “earn my own money and feel independent”. Her determination, combined with her brashness, landed him a job at Sadler’s Wells in the set design department. Despite having no formal training, she discovered that she had the ability to bring spaces to life with paint, fabric and ingenuity. When her friends started asking her to fix up their houses, “it was like she was predestined to become an interior designer,” she says.

Since then, she has always used her own home as a test bed for decorating ideas. And this apartment she bought in 2015 in Little Venice, London, set in two stucco-fronted row houses, is a case in point. The developer of it had “ripped out the heart and soul” of the Victorian building. The moldings and chimneys were gone; the stair railing replaced with “a horrible rotating plastic thing”. But that suited Hersham-Loftus, whose bohemian, boudoir style with a hint of rock’n’roll is clearly his own. “I couldn’t live with someone else’s taste. I am a purist in what I do. I like to start from scratch and create my own invented worlds.”

His apartment has gone through several redesigns. He created wallpapers and commissioned the handmade tiles in the dressing room, where the cabinets are made from old French shutters. At first, the walls were painted a “pale fungus… like the backdrop to a John Galliano fashion shoot.” At one point she brought the terrace plants inside so that “everything felt dark and mysterious, like an urban jungle.”

While working on a terraced house in Amsterdam, he saw that builders were demolishing the interior of the house next door. She ran out and struck a deal to buy the decorative paneling and the long, wide Baltic pine floor. It has now been restored and outfitted in its sitting room, part of a trio of large but pleasant reception rooms that Hersham-Loftus likes to call, wryly, their “drawing rooms.”

For its latest incarnation, he asked his former colleague, decorative effects specialist Andrea Bizzarro, to give the interior “the feel of a Venetian palace that hadn’t been touched in 90 years.” Faded macaroon tones especially matched well with salvaged French fireplaces and Victorian armchairs, stripped bare to reveal their horsehair innards for a “theatrical” effect. “I always buy unserious antiques; they have souls, but you don’t have to worry about damaging them.”

Certain aspects of the Hersham-Loftus style never change. “I don’t like overhead lighting. I like my spaces to feel mysterious and transporting. And I always use natural materials, like linen or stone. I’m a fan of low seats and I don’t have doors apart from the bedrooms; you don’t really need them, and they get in the way.” Black roofs are another trademark. “You’d think it would feel oppressive, but it’s not, they help ground a room and its contents.”

She has always been drawn to recycling, turning monotonous objects into something magical. She convinced the owner of a fancy London restaurant to give her the mollusk shells that now decorate the kitchen fireplace. She has turned old shoe lasts into chandeliers, adorned with shimmering glass beads. Her latest creation is curtains made from scraps of antique lace, which cover windows and openings and diffuse light like silky cobwebs for a modern Miss Havisham effect.

Their Instagram fans love them. “There’s a real revival of antiques and handmade, especially among younger buyers,” says Hersham-Loftus, who currently works on an apartment for Charlotte Watts, granddaughter of the late Rolling Stone Charlie. “For them this all feels new and different. I also think it’s a reaction to the digital age. People long for something cozy and tactile, a place to escape to.”

She is bringing a similar effect to the “wellness retreat” she is currently designing for Charlotte Church. Set in Laura Ashley’s sprawling former home in Wales, the singer’s brief was “for a mystical, ‘witch’s apothecary’ setting, full of antiques, old paneling and dim lighting.” A soulmate then? “We won. I’m lucky that the people I work for buy into my vibe, my style.”

“It’s like my house, you know,” she concludes, sinking into a pile of peach-colored silk cushions. “I can’t imagine living in a place that doesn’t express myself and my ideas. This is my world.”