Corona in Bavaria: One in 22 students stays at home – Bavaria 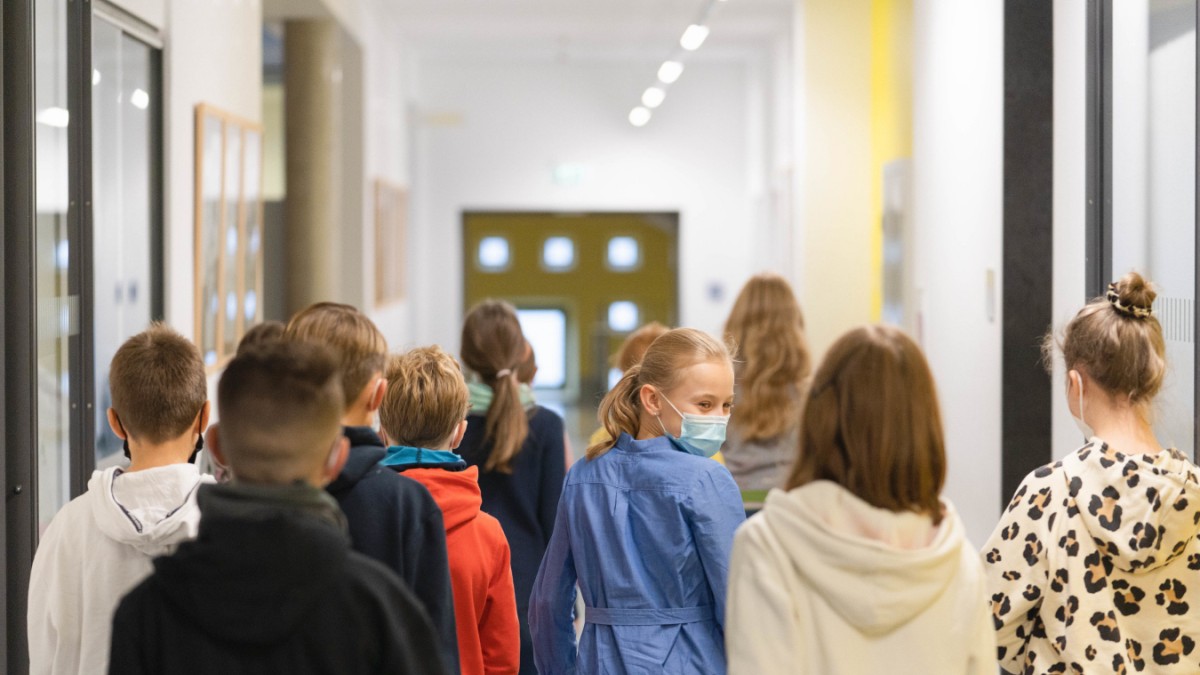 Every 22 students at home due to Corona: many affected daycare centers

Saturday, March 12, 10:31 a.m.: In Bavaria, one in 22 students missed classroom instruction due to Corona. Until Friday, 3.05 percent of the students were missing due to a positive test and another 1.49 percent due to quarantine, according to the Ministry of Education when consulted.

Many daycare centers are also affected by the pandemic. According to information from the Ministry of Social Affairs, 3.57 percent of the approximately 10,200 facilities were affected by closures as of Friday. 26 were completely closed, 343 partially. In a further 1,032 day care centers, more intensive tests were carried out after individual corona cases.

Saturday, March 12, 10:14 a.m.: The seven-day incidence in Bavaria has continued to increase. On Saturday, the Robert Koch Institute (RKI) gave the value of 1876.3. On Friday it was 1788.6. The incidence has been rising since Monday and is once again approaching the previous all-time high in Bavaria, which was reached on February 9 in 1840.4

In the last 24 hours, the Bavarian health authorities reported 44,896 new cases to the RKI, 42 people died from or with Corona in the same period. The Haßberge district has the highest incidence with a value of 3050.7. It is followed by the districts of Regen (2884.4) and Neuburg-Schrobenhausen (2706.4).

Thursday, March 10, 6:56 p.m.: Health Minister Klaus Holetschek (CSU) wants to stick to the FFP2 mask wherever masks remain mandatory after March 19. he said thursday Süddeutsche Zeitung. The background: Even after the planned revision of the Federal Infection Protection Act, according to which most protective measures against the coronavirus will no longer apply on March 20, the Free State can probably decide for itself what type of mask should be used in nursing homes. clinics and local transportation. With his request for an FFP2 mask, Holetchek positions himself against the Deputy Prime Minister and Minister of the Economy, Hubert Aiwanger (free voters), who on Wednesday asked to abandon the FFP2 mask requirement on local transport and instead return to the surgical mask , which many people believe is more comfortable to wear, especially at higher temperatures, but does not protect as effectively.

Holetschek also highlights the high protective effect of the FFP2 mask. He refers to a corresponding study by the Max Planck Institute. Furthermore, Holetschek says, it is still a highly infectious virus. In particular, Omikron’s new BA.2 variant contributes to faster propagation. On Thursday, the health minister also reiterated his criticism of the federal bill, which he believes does not regulate clearly enough when federal states can take what action should the pandemic escalate again.

ThursdayMarch 10, 7:03 a.m.: The seven-day incidence in Bavaria is increasing significantly. Thursday was 1699.9, Wednesday was 1619.3. Four of the 96 rural districts and urban districts have an incidence below 1,000, and 34 cities and districts are above 2,000. The Bavarian health authorities reported 51,882 new cases to the RKI in the last 24 hours. 51 people died of or with Corona in the same period.

At the top of the RKI list nationwide is the district of Garmisch-Partenkirchen with 2,995.0 new infections per 100,000 inhabitants in the last seven days. It is followed by the districts of Regen (2808.1) and Freyung-Grafenau (2659.7).

Holetschek: launch of the Novavax vaccine for all adults with immediate effect

Wednesday, March 9, 10:33 a.m.: The newly approved Novavax vaccine has been available in Bavaria for a week; initially, only health workers could be vaccinated with it. According to Bavarian Health Minister Klaus Holetschek, it is now open to all adults. “Appointments can now be made at vaccination centers,” he said Wednesday in Munich. Until now there has not been much interest in the protein-based vaccine. “Since Wednesday of last week, almost 2,300 people in Bavaria have decided to get vaccinated with Novavax,” Holetschek said. And because the demand for the previously planned group of people is low, there is no longer any prioritization.

Until now, Novavax was only intended for unvaccinated people, for whom the facility-related vaccination obligation will apply from March 15. These include employees in hospitals, nursing homes, medical practices, emergency services and other facilities. The vaccine will also be given in doctors’ offices in the near future. “I hope that with the more classic vaccine we can convince many more people who were skeptical about previous vaccines,” said the Health Minister. Anyone who just wants to get vaccinated with Novavax can make an appointment at the vaccination center by phone; the selection still needs to be adjusted in the Bavarian vaccination portal. According to the ministry, a total of 225,000 doses of the Novavax vaccine have been delivered so far. For complete protection, two doses are given three weeks apart.

Wednesday, March 9, 6:13 a.m.: The seven-day incidence in Bavaria is rising again. On Wednesday it was 1619.3, on Tuesday it was 1560.4. According to figures from the Robert Koch Institute (RKI), the nationwide incidence is also on the rise: it rose to 1,319 after 1,294 the day before. Four of the 96 rural districts and urban districts have an incidence below 1,000, and 28 cities and districts are above 2,000. The Bavarian health authorities reported 40,626 new cases to the RKI in the last 24 hours. 47 people died of or with Corona in the same period.

At the top of the RKI list nationwide is the district of Garmisch-Partenkirchen with 2868.2 new infections per 100,000 inhabitants in the last seven days. It is followed by the districts of Regen (2822.3) and Freyung-Grafenau (2595.9).

No agreement on the abolition of the mask requirement in schools

Tuesday, March 8, 2:00 p.m.: The state government is divided on ending the obligation to wear masks in classrooms. At Tuesday’s cabinet meeting, free voters were unable to assert themselves against the CSU with the demand that the mask requirement be removed at least in elementary schools in the next week. “We couldn’t agree on that today,” admitted Education Minister Michael Piazolo (Free Voters).

The head of the State Chancellery, Florian Herrmann (CSU), justified sticking to the current regulations above all with the fact that one did not want to decide things shortly before the federal-state round on Corona scheduled for next week that could become obsolete soon after.

On the other hand, it was decided that regular corona tests in schools and kindergartens should initially continue until the Easter holidays. This should continue to ensure the safe operation of schools and kindergartens, he said. Vulnerable groups must be protected as best as possible. According to the cabinet decision, the testing systems must continue to be provided even if the federal government does not create a new legal framework so that the tests can also be mandatory after March 19. On this date, all drastic corona restrictions will expire throughout the country; It is not yet clear what measures will still be possible.

Tuesday, March 8, 7:13 a.m.: The incidence in Bavaria remains fairly stable. On Tuesday it was 1560.4, on Monday it was 1541.9. According to the Robert Koch Institute (RKI), five of the 96 independent districts and cities are below the incidence of 1,000, and 17 cities and districts are above 2,000. The Bavarian health authorities reported 26,580 new cases to the RKI in the last 24 hours. 68 people died from or with Corona in the same period.

Monday, March 7, 6:23 a.m.: For Bavarian schoolchildren, the second half of the school year begins this Monday. After the end of the week-long carnival holidays, they are now regularly tested again for a corona infection. Girls and boys still have to wear mouth and nose protection in class. However, in the future, the mask can be removed during sports lessons. There are around 1.6 million children and young people of school age in Bavaria.

The professional association of paediatricians recently called for the obligation to carry out corona tests without cause in schools to be lifted and for the obligation to wear masks to be fundamentally revised. However, according to the Ministry of Health, Bavaria initially does not want to change anything in its testing strategy.