Corona and war: what will be possible again 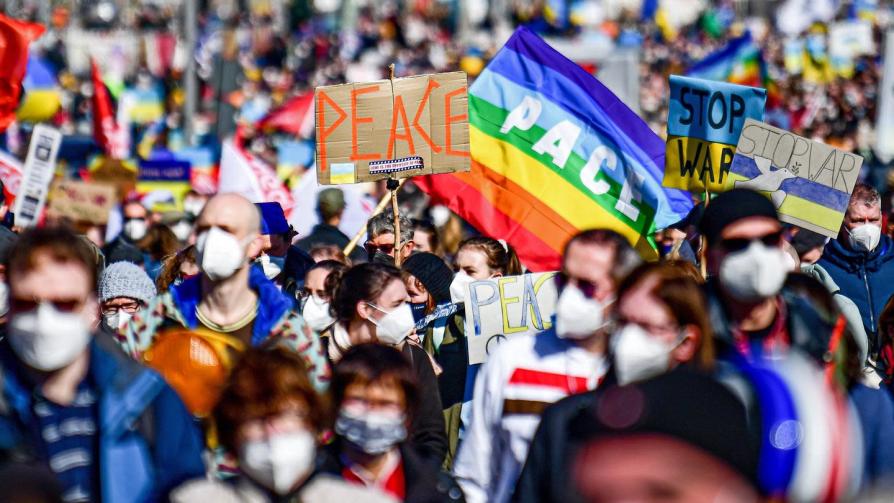 Our author actually wanted to welcome the new post-pandemic opening right now, right now. Now everything is different, and yet much is still valid.

When the idea for this text arose, the omens were different. The prospect of the imminent lifting of many measures taken to contain the pandemic had been arrested lifted his spirits. The winter had been long. Spring would begin on March 20. With the spread of the omicron, the pandemic had lost its horror and Sascha Lobo wrote from the hearts of many when he said that he had reached the endemic interior. Now it no longer seemed presumptuous to imagine a post-pandemic future.

One day we would once again move freely, travel, gather everywhere, and take off our masks unashamedly. We were all the time with our families of origin. And not only that: this spring would bring us a social thaw, a new temperate climate. A changed news landscape. That could, should be a feeling of great liberation.

We would remove the signs from the path that we had followed for two years. incidences? R-value? vaccination rate? At some point in an even farther and happier day, they would be just numbers, signs, like others. Ciesek, Drosten, Streeck and Kékulé, cartographers of the polluted world, heroes of a pandemic culture, would return to their communities. And others would speak again. Perhaps we would even fill the gap that had arisen between those who were against and those who were for vaccination. Finally, the personal would become private again. We would all be more distanced, more friendly in our dealings with others. Because, paradoxically, by constantly keeping our distance, we had lost more and more distance. Suddenly, the lives of others were something that could hardly be separated from their own.

The roommate party on the fourth floor? An attack on my grandmother’s life.

The refusal of an esoteric acquaintance to be vaccinated? A cut in the freedom of my children.

My mother’s decision to go to the city even at rush hour? Irresponsible with us, who not only loved her, but also needed her alive.

And not only had I dragged everyone else before my inner judgment, I had also struggled with the feeling that their lives depended on my ways, my way of life. With a little distance, I can and I must admit: I felt very important. The pandemic had brought me not only exhaustion, worry, and abandonment, but also a dubious ego boost. As far as I knew and believed, I had followed the ever-changing numbers, graphs, and maps, but had lost my inner compass: a healthy balance.

Originally in this text I wanted to think if and how I could recover this measure when the long-awaited spring arrived. I wanted to get away from numbers, from the land of empiricism, in which I had moved like a stranger. He wanted to promote a return to concepts and perceptions in public and private discussions. On open narratives and open readings. In recent years, like most people, I had stuck to what was supposedly clear. I had believed data more than words and asked for modeling instead of thinking ahead myself. Now, I thought, would be the time to examine this way of thinking and speaking and, ideally, discard it again. language is relationship. And the language of the pandemic had changed our relationships.

I wanted to ask people to take a step back, to go from arrogance to a process of reaching out. Giving space to the intuitive again. After a time in which so many destinations were reflected in numbers and statistics, he dreamed of a language of the approximate and the individual. On March 14, mathematicians and number fans around the world celebrate Pi Day. I boldly thought that the irrational number Pi could also be a symbol of careful thinking and speaking for me. Pi is a number, but it eludes a full digit representation. It is a reminder of our inability to fully understand the phenomena of this world. And in the awareness of this inability, a healing process could possibly begin. Call, purification, that was also waiting for him.

The phrase that Jens Spahn said at the beginning of the pandemic has now been quoted a lot: “We will have to forgive ourselves a lot.” He wanted to apologize to those whose pain was countless and immeasurable. Who lived in those gray and border areas for which there can be no empirical values, where empiricism fails. For example, the mother of a friend who suffers from dementia. She was also not allowed to receive visitors at Christmas parties for reasons of fighting the pandemic. What world was she in on Christmas Eve? How did it feel for her to be alone, always responding to the sound of a familiar voice, a familiar smell, a hug? How does eight weeks of isolation feel to a person who no longer has a concept of the passage of time, of yesterday, of today, of tomorrow? I wanted to apologize to the young mother who gave birth alone and wearing a mask in the delivery room. The father who couldn’t be there when her child was born. I wanted to remember those who died and were born during the pandemic. But also to those who were exposed to the measures taken to combat the pandemic without understanding their background, such as children or people with intellectual disabilities. To women and men who lived on the street, in shelters and in asylums. To the people who experienced violence in their homes when social control was lost. To all those who did not have a voice or were not heard.

We couldn’t change what we had done to them. But very soon we would push open the doors we had closed with the best of intentions and in anguish. “I want to write about what will sooner or later become possible again,” I announced to my girlfriend.

A week later war broke out in the Ukraine. Overnight, the information landscape and the social climate have changed, even incidents, which are now on the rise again, go into the background. The number of soldiers killed on both sides and civilians, women, men and children, is mentioned in the radio breakfast. Political discourse is determined by the sums to be spent on German helmets, weapons and rearmament. Refugee movements are quantified. War maps are shared on social networks. Again, of necessity, reference is made to supposedly clear equations. As a resident of Munich, I can hear a speech from the Bavarian father: “Tonight we are all Ukrainians,” he shouted at an interparty rally on Königsplatz, expressing his solidarity in the form of verbal appropriation.

But rapprochement can only be successful if we think and see what separates us. When we recognize how shy we are.

We find the concept of “change of era” everywhere these days, whether it is expressed in fear, resignation, or determination. Added to this are “historical”, “irreversible”. This use of language makes me think because it defines something instead of opening up new spaces.

On the third day of the war, a children’s home was evacuated from kyiv. After a 70-hour journey, all the boys and girls arrived in Freiburg in perfect condition. Roman Kornijko, director of the Vaterhaus children’s home, appeared shocked on camera as he recounted how they were attacked on the way. “In the few hours since the war began, the children have aged ten years. [Ihre] Childhood is over.” Freiburg mayor Martin Horn touched Kornijko on the shoulder in a gesture of comfort. The two men were close together, but far apart.

What the refugees experienced is beyond our imagination, and we cannot empathize with it. Nor what it means to be at war. We must keep this in mind when we reach out to help and act. Only when we step back and see what separates us, we meet. More than ever we need open narratives. Courage for modesty, caution.

This morning my little son asked me: “What did you dream mom?” At the age of three she loves images and dream stories. Everything is still possible for him and in flux, nothing is finished. There is no truth, not even a reality. At least I think so, because his experience is not mine.

Although everything turned out differently from what we expected, I would like to advocate thinking and talking about approximation and, above all, approximation. Due to an attitude of language that also names being strange and not being able to grasp things, which always assumes that other experiences cannot be measured, and continues to ask questions instead of giving answers. For the effort to look for something special in general. At a time when so many things push toward the clear and absolute, I want to celebrate pi: an absolute number that constantly eludes our need to write everything down.