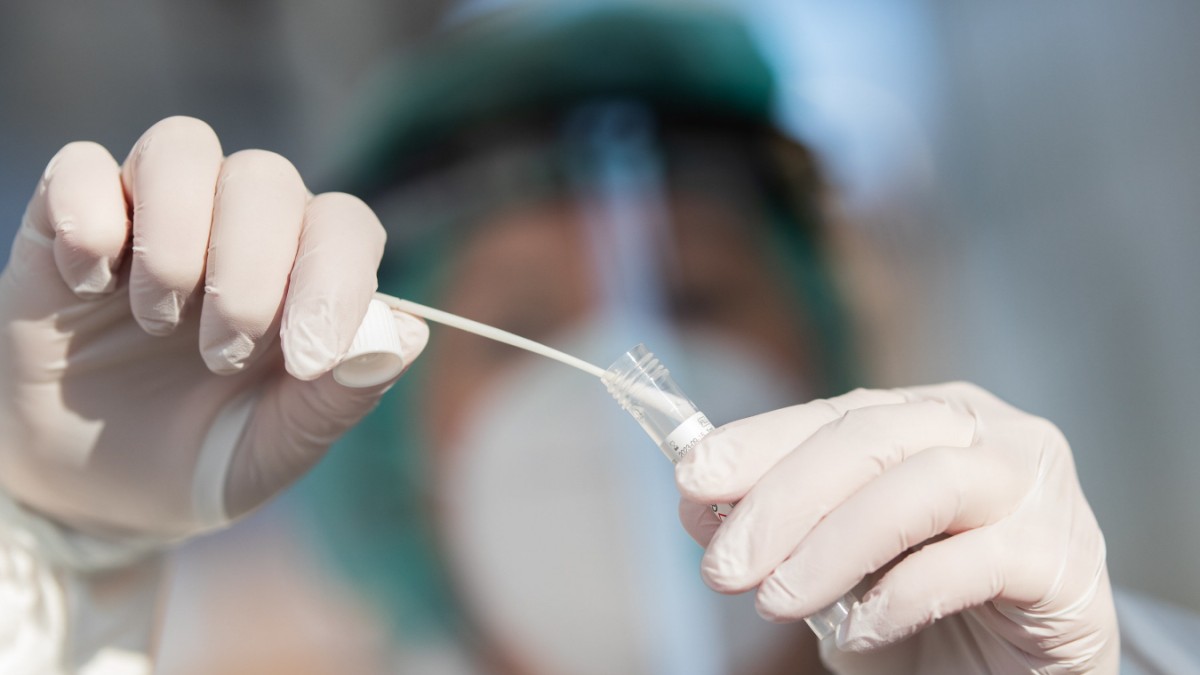 The Robert Koch Institute (RKI) reports 262,593 new infections in 24 hours. Overall, the number of confirmed infections in Germany exceeds 17.7 million. The national seven-day incidence rises to 1,607.1 from 1,585.4 the previous day. Another 269 people died in connection with the virus. This brings the number of reported deaths to 126,142.

However, the figures are only of limited importance. Experts assume a large number of cases are not recorded in the RKI data. Testing capacities and health authorities are stretched thin in many places, contacts are only traced to a limited extent. This is why we use the SZ Corona Dashboard to display an average value of the reports from the last seven days, which is intended to compensate for fluctuations from day to day. You can find more information about it on the transparency blog, more data and graphs about the pandemic here. (03/16/2022)

Biontech Files for Emergency Use Approval for Second US Booster Vaccine

Biontech and Pfizer filed for emergency use authorization in the US for a second booster injection of their joint vaccine. It should apply to patients over the age of 65 who have already been boosted with one of the approved vaccines, the companies announced. The regulatory filing is based on data from Israel, collected during the omicron wave, showing a heightened immune response with fewer infections and severe illness, the companies said. (03/16/2022)

What will corona regulations look like in the workplace in the future? The federal government will decide on this on Wednesday morning. The 3G rule and the obligation to enable the home office expire on Saturday. In future, employers should be able to define protective measures in their own companies. This is provided for in the new Corona Occupational Health and Safety Ordinance, which the cabinet is discussing.

Going forward, businesses should assess the risk posed by the virus and then, if necessary, mandate reduced indoor contacts, provide masks and one (free) test per week, especially if the number of infections at the site is high. Until now, employers have been forced to offer two free tests per week; In larger companies, only those who have been vaccinated, have recovered from Covid-19 or have tested negative for Corona (3G) can report to the workplace. Additionally, employers should continue to allow their employees to get vaccinated during work hours.

Trade unions and employers do not agree with these planned innovations. The president of the employers’ association, Rainer Dulger, welcomes the planned abolition of the requirements for companies and promises that “effective protection measures will continue to be maintained”. Anja Piel of the board of directors of the German Federation of Trade Unions, on the other hand, warns: “Courageous action is needed to combat the high infection rate. Friendly advertisements are of little help.”

Regarding mobile work, Dulger says that it will continue to be used in companies without legal obligation. He criticizes the fact that the new ordinance no longer stipulates working from home, but contains a note that the employer has the option to offer this to his employees; such specification through the back door is superfluous.

Trade unionist Piel, on the other hand, says: “Employers must not ignore the fact that working from home, where possible, remains a useful tool to limit contacts and therefore the risk of infection.” The risk of infection remains great. (03/15/2022)

Many countries want to extend the corona rules

In view of the high number of corona infections, several federal states do not want to let their protection measures expire at the weekend, but rather extend them until April 2. These include Bavaria, where the cabinet decided on Tuesday, Baden-Württemberg, Thuringia, Mecklenburg-Western Pomerania, Brandenburg, Berlin, Bremen and Hamburg. In Lower Saxony, the state government wants to present a transitional regulation in the course of the week, which should apply until April 2. According to information from the German Press Agency, North Rhine-Westphalia plans to use the possible transitional arrangement.

According to the federal government’s plans, after March 19, masks will only be mandatory in nursing homes, clinics, and on local and long-distance public transport. If the corona situation worsens regionally, the federal states can introduce stricter rules by parliamentary decision, although not all previously available: this is the so-called hotspot regulation. On Wednesday, the Bundestag will discuss for the first time the government’s draft for the new legal basis. It is intended to replace the current one that is being removed. The law is expected to be approved on Friday.

This also includes that countries can keep their previous regulations for a transition period, until April 2. Federal Health Minister Karl Lauterbach (SPD) called on the federal states to do the same and then use the new hotspot regulations to control the infection process. “In an emergency, this can also mean that if the situation in an entire federal state is so precarious that an entire federal state declares itself a hotspot, as Bavaria is now considering, for example.” There will be no Freedom Day, Lauterbach emphasized in ARD’s “Morgenmagazin.” “We are not in a position to abandon all measures now.”

Asked if changes to the Infection Protection Act are still possible, Lauterbach said: “Of course we are discussing, we also negotiated with the parliamentary groups until late last night. It continues today, changes are still possible.” But I just want that.” , stand up for what we have once again: If everyone really uses hotspot regulation, then we can really do a lot with it.”

The head of the Greens parliamentary group, Britta Haßelmann, said that she “does not hide” that she would have liked stricter requirements on the coronavirus. But that could not be done with one of the two coalition partners, obviously referring to the FDP. For example, the Greens would have supported a general obligation to wear masks indoors. (03/15/2022)

To protect your privacy, it has not been uploaded without your permission.

WHO: The number of reported corona cases worldwide is rising again

According to the World Health Organization, the number of weekly reported corona infections worldwide has increased for the first time since the end of January. According to the WHO in Geneva, eight percent more infections were reported in the second week of March than in the previous week. A total of eleven million new cases were recorded. In addition, 43,000 people died from or with Covid-19. The week-on-week increase was particularly clear in the Western Pacific region and in Africa. In Europe, the increase is two percent. The Eastern Mediterranean region, Southeast Asia, and North and South America all recorded declines. Overall, the total number of corona infections worldwide has risen to 455 million, he said. Six million deaths are linked to the disease. (03/15/2022)

The Netherlands is also abolishing the latest protective measures against Corona. From March 23, it will no longer be necessary to wear masks on buses and trains, and the obligation to try on before big events will be abolished. This was announced by the Minister of Health, Ernst Kuipers. In the country of 17.5 million people, there is also no quarantine requirement: anyone who has a positive test result must stay home. But that’s just a recommendation.

After most restrictions were lifted a few weeks ago, the number of new infections has risen sharply again. The number of patients in hospitals is also increasing. The government still considers abolition justifiable. Currently there are around 2,500 new infections per 100,000 inhabitants in seven days. For comparison: In Germany, the seven-day incidence is 1585.

The expert committee advising the government had advocated keeping the mask requirement on local public transport. The government did not follow. Face masks should only be worn on planes as this has been agreed internationally. Visitors from outside the Schengen area still need to be vaccinated, tested or recovered before entering the Netherlands. (03/15/2022)

Study: at least 75 out of 100 Covid patients over 60 years of age died from artificial lungs

According to a study, a relatively large number of older people with Covid-19 in Germany have been treated for severe acute pulmonary failure, but without success. The hospital mortality rate of elderly Covid 19 patients who received so-called Ecmo therapy is “unacceptably high”, according to a study recently published in European Journal of Anesthesiology it has appeared. For people over 60, it was 77 percent.

In so-called extracorporeal membrane oxygenation (ECMO), an artificial lung is used next to the body. The device takes over the function of the organ, which is supposed to recover in the meantime.

For the study, a group led by Benjamin Friedrichson of the University Hospital Frankfurt am Main analyzed data from the 4,279 Ecmo treatments for Covid 19 patients in German hospitals between January 2020 and the end of September 2021. “Doctors in this country do not make bad medicine and Ecmo is a wonderful therapy that we don’t want to miss,” said Friedrichson. “In younger people, the results are also very good.” In Germany, however, compared to other countries, many older people were treated in ecmo.

The authors of previous publications had also pointed out the comparatively poor results of the German Ecmo in the pandemic. Experts also see a connection to a very high number of clinics across the country that use the procedure. The necessary experience is not always available. (03/15/2022)

According to a new study, fourth graders fell significantly behind in reading during the coronavirus pandemic. Among nearly 4,300 elementary students tested, fourth graders in 2021 had “substantially lower” reading skills than fourth graders in 2016 after a good year of restrictions due to the pandemic. On average, they missed half a school year, according to a landmark study by the Institute for School Development Research at the University of Dortmund. Reading competence (fluent and meaningful reading) is acquired centrally in primary school. It is considered a key qualification for the educational path.

After frequent alternations between distance and in-person learning or class cancellations, the research team found declines in reading performance across all groups among fourth graders. The proportion of strong and very strong readers fell from 44 percent (2016) to 37 percent. 28 percent had only weak or very weak reading skills. Five years earlier, at 22 percent, it was significantly lower. (03/15/2022)

Rajoy on the new law of remembrance: “If it sounds bad for Felipe González, it’s even worse for me”