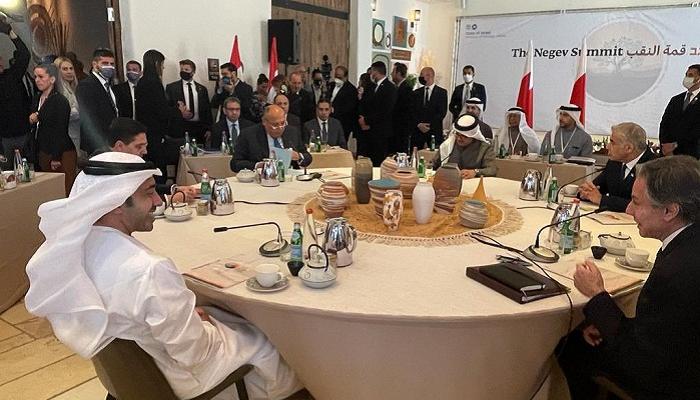 Nasser Bourita, Minister of Foreign Affairs of Morocco, represented the Kingdom of Morocco at the Negev Summit, a summit in which the Foreign Ministers of the United Arab Emirates, Egypt, Bahrain, the United States and Israel participated for two days.

Commenting on the Moroccan participation in the summit, Khaled Chiat, professor of international law and international relations at the Mohammed I University of Oujda (eastern Morocco), said that the presence of the Moroccan Foreign Minister, Nasser Bourita, with his counterparts from the United Arab Emirates, Israel, Egypt, the United States and Bahrain, is at the center of Morocco’s collective commitments, within the framework of its responsibilities with other parties at the international level.

In a statement to Al-Ain News, Chiat explained that the presence of the Foreign Minister of Israel and the US is part of Morocco’s growing role at the regional level and its search for a kind of homogeneity across Moroccan regional level. policies, in line with US policy, given the presence of big bets tied to two big positions.

The same spokesman pointed out that the first issue is reflected in the nuclear agreement with Iran, including the possibility of removing the “Iranian Revolutionary Guard” from the list of “terrorist or solidarity parties”, as well as what is reflected in it about the situation at the regional level.

He also added that this issue will be considered a victory for Iran, which has penetrated into Lebanon, Syria and Yemen, in addition to Iraq, which is one of the countries that has been invaded by Iran, an issue that requires a corresponding vision. of this Iranian expansion at the regional level.

As for the other role, it is what these countries are doing in the Ukraine crisis, since Morocco, Israel or other countries are parties that can be mediators and can also be effective in finding a solution or building a system of alliances in the framework of current international relations that are characterized by the alignment in the North Atlantic Treaty Organization and the line around it, in which Morocco is situated, as an essential fringe of the Alliance.

The professor of international relations pointed out that Blinken’s next visit to Morocco could take place in closer regional contexts, especially with regard to energy and the issue of Morocco’s territorial integrity, which will be present given the nature of relations bilateral, but the presence in the Negev is to give an image of the existence of a collective power in the light of dangerous regional transformations at the level of international relations. 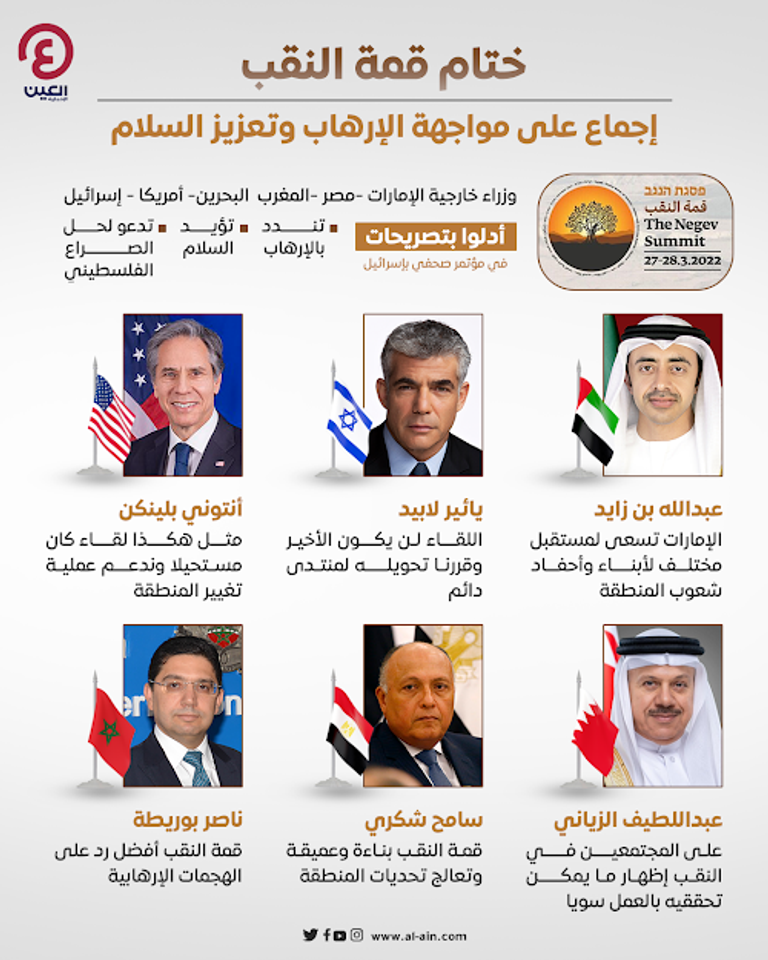 For his part, Hassan Balwan, political analyst and expert in international relations, assured in statements to “Al-Ain News” that the Moroccan Foreign Minister’s visit and his participation in this historic and unprecedented summit took place in a special regional framework and international context.

Balwan added that in terms of the regional context, it is reflected in a set of challenges facing the Middle East and North Africa, especially with regard to developments related to the Iranian nuclear file, as well as the challenges of the North African region. Sahel and the Sahara, and then the Ukraine crisis, which casts a shadow over the world and the region as well.

Balwan pointed out that there is also the issue of the Moroccan Sahara, which is considered a sacred issue for all Moroccans, and which was very present at this summit, given that Israel and the United States of America defend the legitimate rights of Morocco, in addition to the Arab countries that recognize the Moroccan Sahara, each according to their official position.

In this context, and for the first time officially, the Israeli Foreign Minister, Yair Lapid, has affirmed that Spain’s declaration of its support for the autonomy plan, as a realistic and serious solution to the dispute over the Moroccan Sahara, is a “gesture of goodwill”, pointing out that the Spanish position came to join the pro-Moroccan positions. It was expressed by many countries.

And the official account of the Israeli Foreign Ministry on Twitter quoted Lapid, after talks he had with the Minister of Foreign Affairs, African Cooperation and Moroccan Expatriates, Nasser Bourita, today, Monday, on the sidelines of the Negev Summit. , saying: “We will work together and within the framework of a special relationship, to face the attempts to violate the sovereignty and territorial integrity of the Kingdom of Morocco, as well as the attacks against Bahrain and the United Arab Emirates…”

The Israeli foreign minister added: “We are determined to achieve prosperity and peace in the region and in the world”, and stressed that “the Negev summit sends a strong message to the extremist forces led by Iran, who are trying to destabilize the region, that we are establishing a united front committed to peace, prosperity and stability (… ) This is a special relationship that depends on working together to meet challenges. 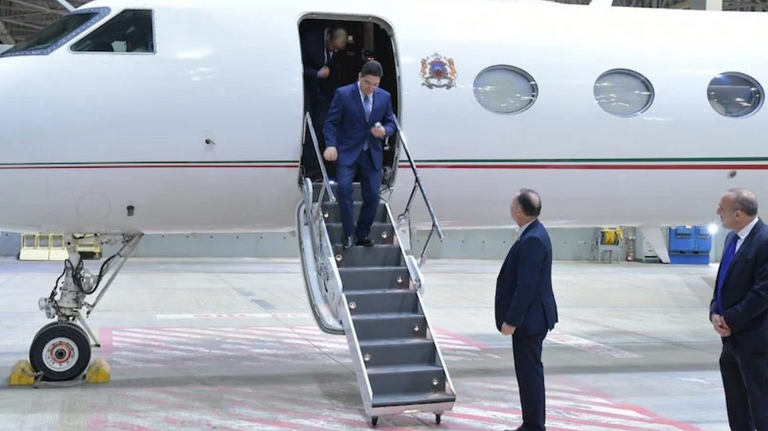 On the other hand, Balwan stressed that there are movements to reorganize international relations at the regional level, for which the Kingdom of Morocco wants to play a fundamental role in restoring this international agreement in the region, and this is highlighted through the good Morocco’s relations with the Palestinians and the Israelis, since Morocco’s position was clear: from the beginning of the resumption of Moroccan-Israeli relations, the Palestinian cause will not be at my expense.

Parallel to that, adds Balwan, is the central issue of the Kingdom, which is the Moroccan Sahara, pointing out that what matters most is American and Arab recognition.

He pointed out that Israel’s recognition of the Moroccan issue of the Moroccan Sahara is a matter of time, which will come in due course, given that Israel is on the side of Morocco, since it signed unprecedented security, military and economic agreements in the history of the Arab-Israelis since the beginning of the Palestinian cause.

During his participation in the Negev Summit, the Minister of Foreign Affairs, African Cooperation and Moroccan Expatriates, Nasser Bourita, called for the need to build a new dynamic for peace and take concrete steps that open promising perspectives for all the peoples of the Middle East. . 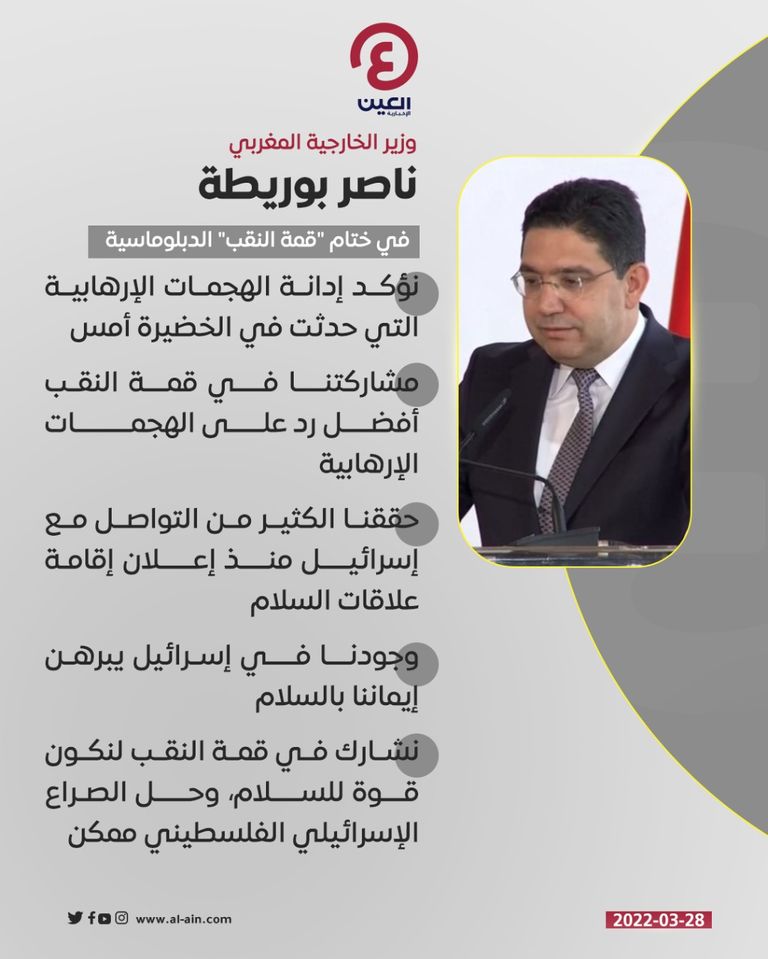 Bourita said: “We must build a dynamism according to tangible steps that people feel and that contribute to improving life in the world and, in addition, open promising perspectives for the youth and people of our region.”

He added: “We are here in the Negev to be a force that works for peace and to say that a solution to the Palestinian problem and the Arab-Israeli conflict is possible,” and emphasized that King Mohammed VI has always supported a two-way solution. state. living side by side, and the establishment of a Palestinian state with East Jerusalem as its capital within the 1967 borders.

In the same context, Bourita stressed the need to preserve Israel’s security and interests.

He also expressed his gratitude and appreciation for the role played by the United States in supporting the Middle East peace process, stressing that the United States has always been a reliable partner that can be trusted to build peace.

He stressed that the Negev summit brought many positive messages to the peoples of the region, “but also clear and firm messages for those who work directly or through agents, that we are here to defend our values ​​and interests and to create a deterrent to protect this dynamic.

On the other hand, the Minister of Foreign Affairs, African Cooperation and Moroccans Living Abroad condemned the attack that targeted the city of Hadera, south of Haifa, saying: “Our presence here today is the best response and response to these attacks”.

He stressed that “regional dynamism is very important, as is regional stability to promote peace between Israel and Palestine, and Morocco has played a leading role in the peace process in the Middle East, and is also willing today to contribute to giving a new impetus to this dynamic”.

The same spokesman indicated that since the signing of the Tripartite Declaration in Rabat much progress has been made, pointing to many mutual visits, launching of flights, organization of meetings and intense meetings.

The Moroccan Foreign Minister stressed that these relations will soon witness an important dynamic that will further contribute to strengthening these relations in various fields, especially in the diplomatic aspect.

Bourita concluded by saying: “We are here today because we truly believe in peace, not in peace in which we ignore each other, but in peace based on the construction of common values ​​and interests, and peace that keeps us away from war.”