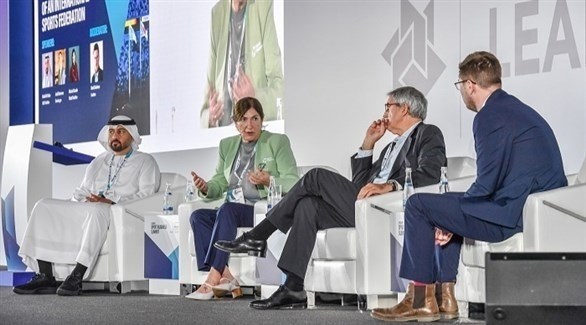 The World Summit of Sports Leaders, which was held at the Yas Marina Circuit Convention Center in Abu Dhabi for two days, concluded with great success.

The sessions on the second and final day of the World Sports Leaders Summit saw a review of a group of leading players who promoted the exchange of experiences, and discussed pathways of development and sporting progress Cricket, and Tom Banton, the English cricketer in the Somerset cricket team, who spoke about protecting the game of cricket in a changing world and about the positives, negatives and changes that have taken place in the sport of cricket, noting that cricket in Abu Dhabi in particular is experiencing a year of remarkable development. year after year, as the two cricket stars underlined On the need to pay attention to the youth sector to ensure the development of cricket.

During the second session, titled (The Future of Investing in Golf), Phil Cotton, CEO of Elevate Sports, discussed many topics related to the game of golf and what players need to do to promote the sport, in addition to the tight schedule. of the tournaments that are held annually and how to face this challenge, indicating that what distinguishes the game of golf from other sports is the possibility of practicing it at an advanced age, emphasizing that the game of golf has become available (virtually) to through multiple technological techniques that can be practiced at home, but the presence in the course (realistic) is more beneficial in terms of walking, which can reach 5-6 kilometers per day.

Rivera underlined his immense happiness to be back in Abu Dhabi, expressing his happiness for the association agreement signed between the association and the department, going over the details of the history of the first association of its kind in the Middle East after the pandemic, while pointing out at the same time, the benefits that young players will get from announcing the School League in Abu Dhabi.

Rivera said: “Attracting young people to the practice of basketball is part of our mission to spread the values ​​of teamwork, respect and tolerance, in addition to inspiring new generations of basketball players and fans and communicating directly with them, beyond our geographical borders. “

While Al Balooshi pointed out that the Junior League – one of the fruits of the cooperation agreement with the Association – is a source of inspiration for the youth of Abu Dhabi, because basketball is wonderful and full of enthusiasm, competition and positive values, as it bridges cultures, unites societies, develops teamwork and leadership skills, and encourages healthy lifestyles and exercise.

Al Balushi said: “Through the association agreement with the Association, Abu Dhabi has become the official tourism destination and partner of the Association in the Middle East, North Africa, Europe and China, which brings a lot to Abu Dabi in terms of economic profitability.”

Regarding the reasons for establishing international sports federations, Jordi Bertomeu, general director of the European Basketball Association, Marisol Casado, president of the International Triathlon Federation, and Khalid Al Fahim, president of the UAE Triathlon Federation, spoke during the fourth session on the need to achieve a balance between the participation of the elite and the diverse athletes of the members of society, in addition to some issues related to sources of financing, governance, investments and sponsors.

The fifth and penultimate session of the fourth edition of the World Summit of Sports Leaders presented different global perspectives on building strong ties with fans, in the presence of George Evazoglou, Vice President and Director of Fan Engagement for Europe and the Middle East of the Association National Basketball. and Arti Dabbas, Formula E Media Director.

Evazoglo emphasized the importance of using social networking sites to form strong bonds with fans around the world, while Dabbas emphasized that there are many ways to communicate with fans, and those methods and means may differ for different types of sports. and according to the interest of famous sports stars on these platforms.

The World Summit of Sports Leaders concluded with a sixth and final session on “Women’s Sports” in the presence of Dr. Omniyat Al-Hajri, Member of the Board of Directors of the Fatima Bint Mubarak Women’s Sports Academy, and Laura Georges, former French national. team player, Secretary General of the French Football Federation.

Al-Hajri said: “We at the Fatima Bint Mubarak Women’s Sports Academy still have a lot of work to do to ensure the continuity and increase of women’s participation in sports, as we believe in their own capabilities, backed by the generous and unlimited patronage of Sheikha Fatima Bint Mubarak, President of the General Union of Women and President of the Supreme Council for Motherhood and Childhood, the Supreme Head of the Family Development Foundation – Mother of the Emirates -.

Al-Hajri stressed that the academy assumes the task of promoting and developing women’s sports, through education and talent development, and through the existence of a system of competitions that bring together various sports and inspire changes in behavior in society. , in addition to finding different ways to communicate and improve communication with the community, to motivate everyone to practice sports and make it a way of everyday life.

Al-Hajri added: “We witnessed a 30% annual growth in participation, thanks to unlimited support from various parties, and thanks to our provision of many stadiums, venues for physical activity and community events and races. In addition, the Women’s sport has received more attention, whether from sponsors or media coverage, which has led us to achieve our main goals, and we are still striving to achieve more.”