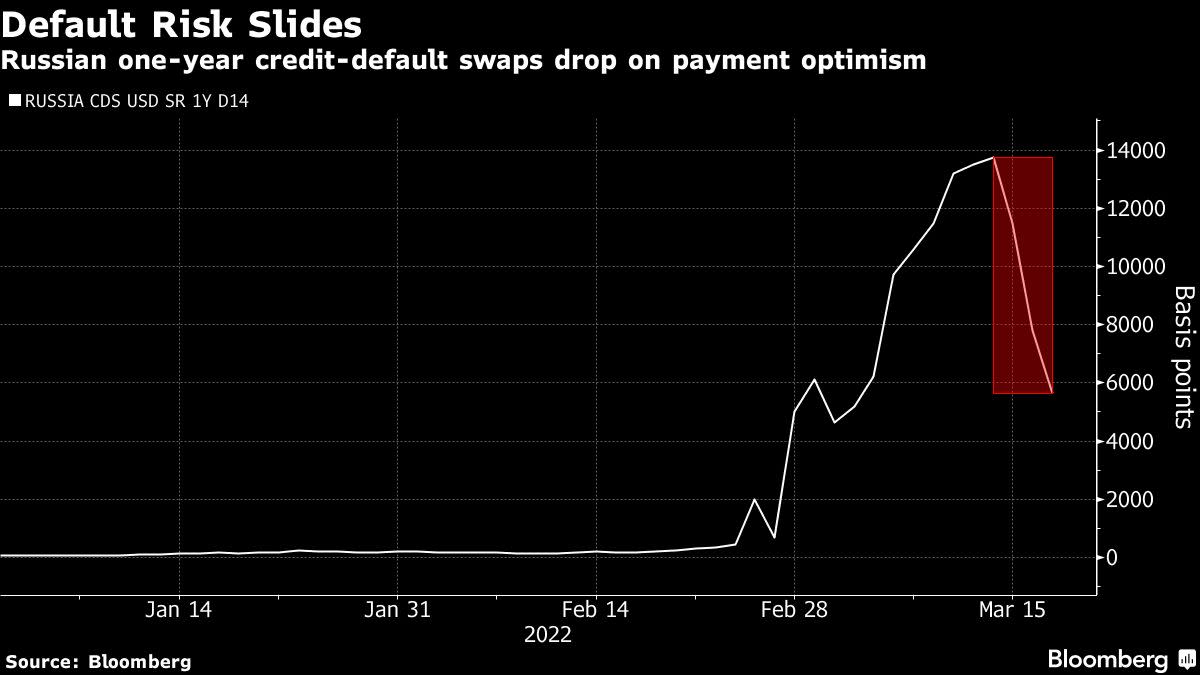 (Bloomberg) — Citigroup Inc. processed the $117 million it transferred to Russia for two coupon bond payments and sent the funds further down the payment chain, according to a person familiar with the matter.

The funds are no longer with Citigroup, said the person, who asked not to be identified because he is not authorized to speak publicly on the matter. A Citigroup spokesman declined to comment. The funds were denominated in dollars, two other people said.

Russia’s Finance Ministry said earlier on Friday that the $117 million dollar bond payment is in the hands of Citigroup Inc. and that the country has met its obligations to investors. JPMorgan Chase & Co. processes the funds, acting as the correspondence bank brought in by Russia to send the payment to Citigroup, Bloomberg News reported. There are still several steps to go before investors receive their money, and as of 11:00 am London time, five bondholders in Europe said they had not received their coupon payments.

The widespread market interest in the fact that the transfer was made in dollars, and the confirmation that Citigroup has the funds, exemplifies Russia’s complex new relationship with the rest of the world since it invaded Ukraine last month. In the weeks since the start of the war, the energy-rich country has become the most sanctioned in the world and has seen its credit rating sink to “junk” status on expectations of default, if any. not from the coupons that expire this week, possibly later. A Citigroup spokesman declined to comment on Friday.

“I don’t remember a time when there was more uncertainty about a sovereign debt; Argentina’s default in 2001 was complicated but predictable,” said Gary Kirk, portfolio manager at TwentyFour Asset Management. “This is much more difficult because of global sanctions.”

Finance Minister Anton Siluanov said this week that a coupon payment was made in dollars, as quoted by Russia’s RIA Novosti news agency. If it is blocked, then it would be paid in rubles. Russia has a 30-day grace period to meet payment obligations starting Thursday. A Treasury spokesman said US sanctions on Russia do not prohibit it from making these debt payments, mirroring a similar statement on Wednesday.

“If the investors cannot access the funds or if a payment is made in a currency not stipulated in the terms of the obligation and we believe that the investor does not agree with the alternative payment, we can consider that it is a default” , S&P analysts said in a statement, downgrading Russia’s foreign currency rating to “CC” from “CCC-.”

Some investors are optimistic that bondholders will receive their payments in dollars. On fournes, the Russian credit default swaps implied a 48% hit probability within the year, according to CMAI data, down from 60% on Thursday morning. Its bonds due in 2023 and 2043 — which have two coupons due this week — are holding gains that will help push their price up more than 100% this week. Both are still trading at very low levels, around half their face value.

In its role as paying agent, Citigroup collects coupon payments from bond issuers and distributes those funds through clearing houses to custodians and ultimately to bondholders. Servicing is an essential part of the world’s financial plumbing, yet rarely gets much attention. Now Citigroup must decide whether to transfer it.

A US Treasury spokesman said on Wednesday that restrictions on transactions with Russia’s central bank and other Russian institutions do not prevent the country from making dollar debt payments, at least until the end of May.

Citigroup is the paying agent for some four dozen bonds tied to Russian companies, according to data compiled by Bloomberg. Some of those companies, such as MMC Norilsk Nickel PJSC and Gazprom PJSC, have successfully made coupon payments in recent days.

But in other cases, coupon payments may not have been made. Citigroup this week blocked a $19.25 million interest payment sent by EuroChem Group AG, a Russian fertilizer maker, according to a person familiar with the matter. Steel and mining company Severstal noted this week that Citigroup could refrain from processing an interest payment on $12.6 million of its dollar bonds.

Russia says coupon cash for dollar bonds is with Citigroup