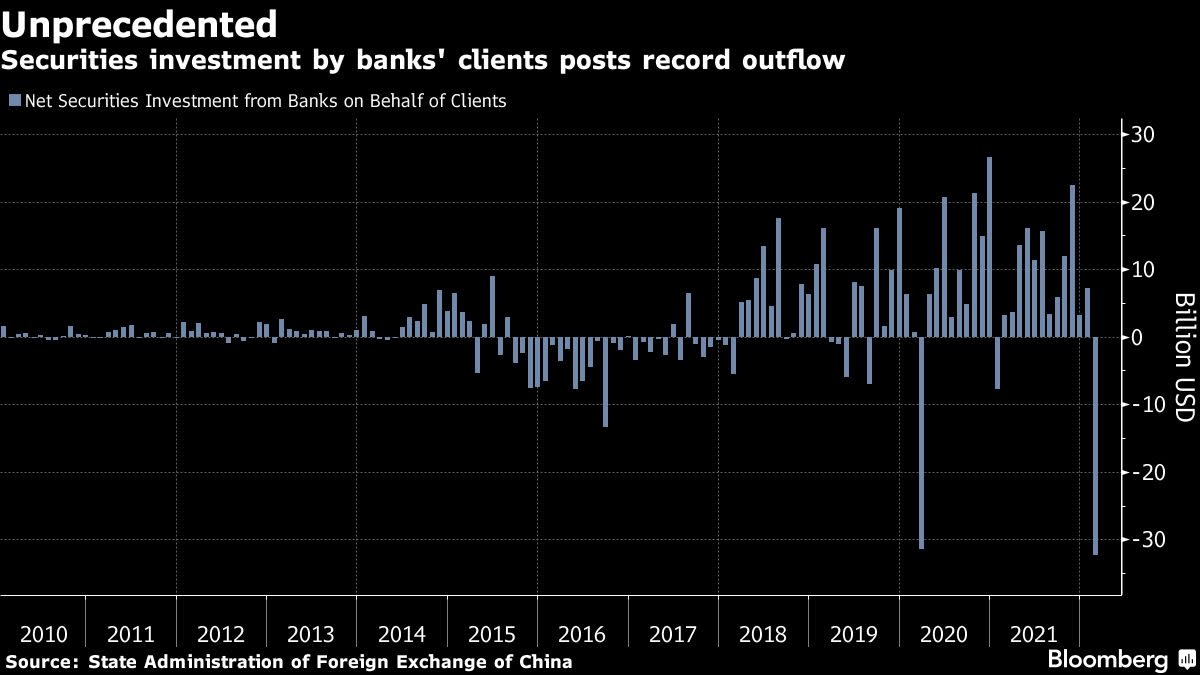 (Bloomberg) — China has seen investors move money out of the country in an “unprecedented” escalation since Russia invaded Ukraine to fines in February, marking a “highly unusual” shift in global capital flows into emerging markets. according to the Institute of International Finance (IIF).

The high-frequency data detects large outflows from Chinese equity and bond portfolios, even as flows to other emerging markets held up, the IIF writes in a report on Thursday.

“The exits from China in the escalation and intensity that we are seeing are unprecedented, especially as we are not seeing similar exits in the rest of the emerging markets,” IIF Chief Economist Robin Brooks wrote with colleagues. “The timing of the outflows, which came after the Russian invasion of Ukraine, suggests that foreign investors may be looking at China in a new light, although it is drawing definitive conclusions about it.”

Official data showed foreign investors cut their holdings of Chinese government bonds to a record low in February, in part because the war between Russia and Ukraine spurred redemptions among global fixed-income investors. The sanctions froze the Russian central bank’s foreign reserves in euros and dollars, fueling speculation that Moscow could sell its holdings of Chinese assets to raise funds.

The Chinese stock market also tumbled earlier this month as foreign investors pulled out, in part on concerns that US and European Union sanctions on Russia may somehow spill over into China. The stock market has rallied since last week as policymakers pledged to support capital markets.

Padraic Garvey, head of global debt and rates strategy at ING Financial Markets, said it’s too early to tell if it’s a trend. He added that the outflows may indicate that some investors decided not to reinvest bond proceeds until “more clarity emerged on the Russia crisis.”

“Often such flows can be driven by redemptions that are not matched by new money, as a constant flow of new money is required just for it to stay invested, particularly in bonds,” he said. “It could well be that net inflows resume in the coming weeks and months.”