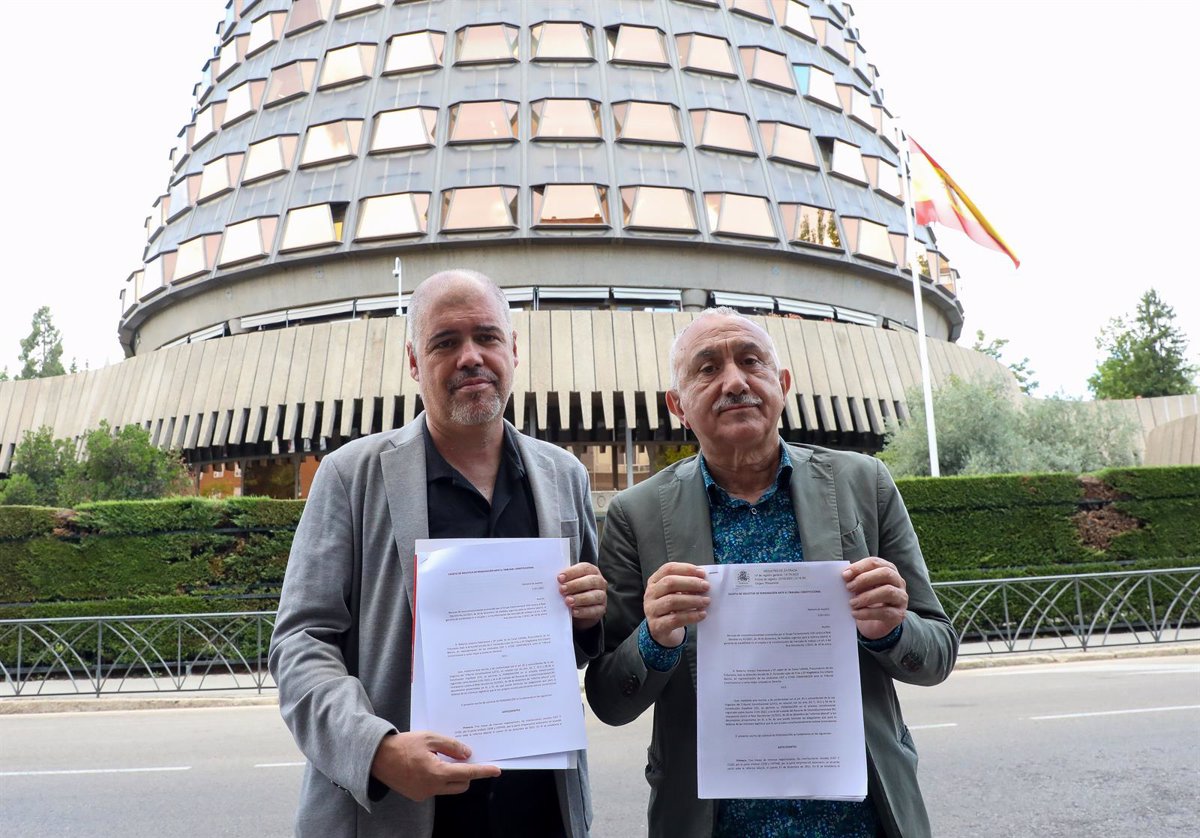 CCOO and UGT filed a brief in the Constitutional Court (TC) this Monday to defend labor reform of Vox’s “absolute kamikaze position” after Santiago Abascal’s formation filed an unconstitutionality lawsuit against that law to have it replaced by Royal approve decree law.

CCOO General Secretary Unai Sordo told the media that the two unions’ decision to appear before the Constitutional Court was due to the defense of social dialogue and the role of unions, the need for labor reform to improve employment stability and safeguarding Spanish interests the release of 70,000 million euros from European funds.

The CCOO leader has insisted that the new labor reform “is the product of an agreement between the government and unions and business associations” that has resulted in a rule that “has quadrupled the percentage of permanent contracts” since its inception. Come into effect.

For this reason Sordo accuses Vox of wanting to bring Spain “down to last place in recruitment quality” with the result of “precarious, temporary employment and labor exploitation”.

Like Sordo, the secretary general of the UGT, Pepe Álvarez, has denounced that Abascal’s party “does not want permanent employment contracts in this country because it wants to maintain a system of derogation from industrial relations that does not allow workers to defend themselves collectively ” .

“They do the opposite of what they preach, they don’t want stability, they want the law of the jungle to prevail, that’s always the business world,” Álvarez told the media.

“FULLY JUSTIFIED” USE OF THE RDL

Vox filed a constitutional complaint against the labor reform, arguing that the government had “abused” use of the Royal Decree Law to “enforce its will”.

For their part, unions, as part of the social actors who negotiated the reform, insist that the use of this figure is “perfectly justified”.

“This is because of the hardship experienced by workers in our country and because we had to meet the deadlines that the Spanish government had agreed with the European Union,” Álvarez explained.

The executive had agreed with the European Commission to present a new working framework before the end of 2021 in exchange for the disbursement of European funds. “If Vox’s inventions continued, they would put our country in a position to lose these European resources,” Sordo stressed on the subject.

The secretaries general of the CCOO and UGT have stressed that the new labor reform is the result of social dialogue between trade unions, employers and the government and is protected by Article 7 of the Spanish Constitution. “CCOO and UGT will continue at the bottom of the canyon to defend the interests of working people,” Sordo concluded.

In early June, the Constitutional Court allowed Vox MPs’ appeal against the royal decree on urgent measures to reform labor, ensure employment stability and transform work to be edited.

The party also requested the examination of the fourth article of Royal Decree-Law 1/2022 of January 18, which contains the above-mentioned Royal Decree-Law on urgent measures to reform labor, ensure stable employment and transform the labor market.

This section establishes, among other things, that contracts can be concluded for an indefinite period and fixed-term contracts if they are “essential” for the fulfillment of the purposes pursued by public administrations and bodies entrusted to the institutional public authority, prior express accreditation.

Historical return? Britney Spears could participate in the Super Bowl 2023