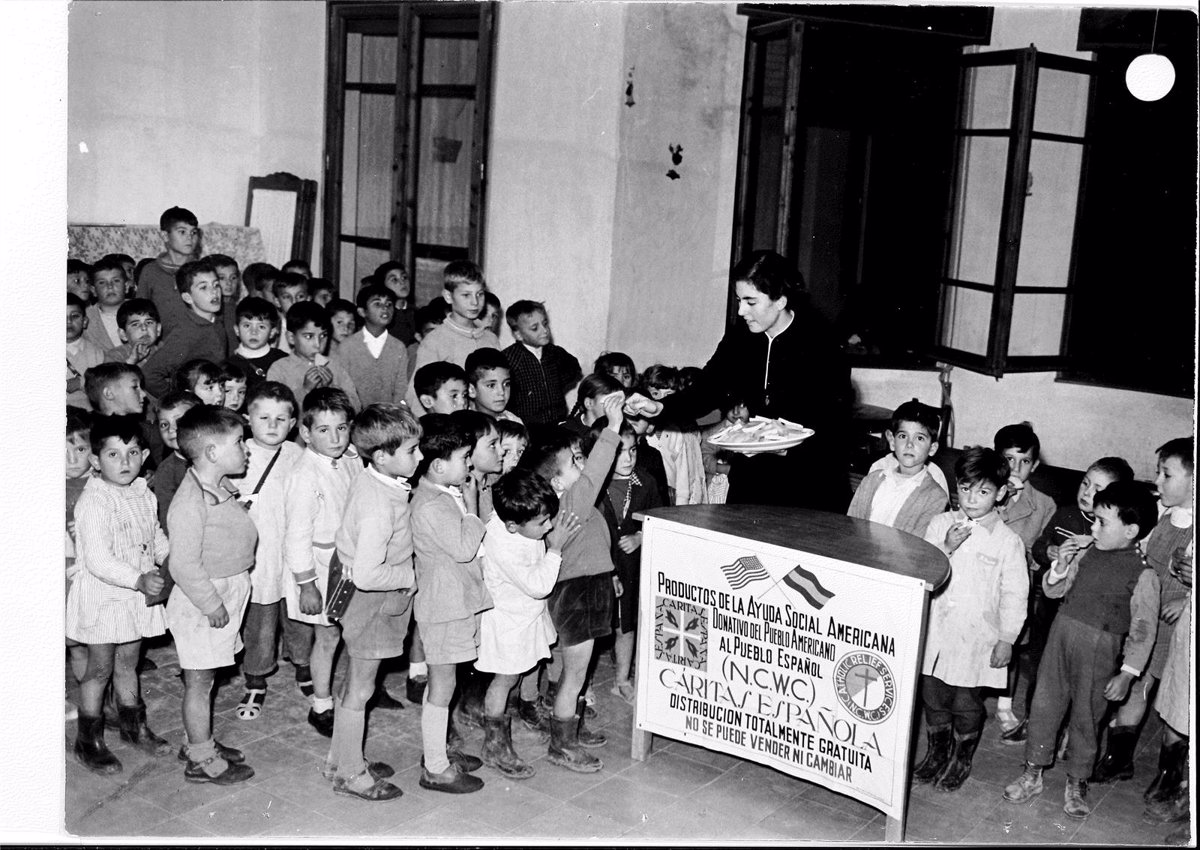 Cáritas Española will celebrate its 75th anniversary next week with an institutional act and mass at the Almudena Cathedral in Madrid under the motto “75 Years of Love for Others”.

The central act of this event is scheduled for next Wednesday, June 29 at 7:00 p.m. at the Casa del Lector in Matadero. The event will be attended by the President of Caritas Española, Manuel Bretón; Secretary General Natalia Peiro and members of the General Assembly, as well as workers, volunteers, participants, collaborators and civil society representatives.

Also, on July 1st at 6:30 p.m. in the Almudena Cathedral, a Eucharistic celebration will be celebrated by the Cardinal Archbishop of Madrid, Carlos Osoro.

Cáritas came into being after the Spanish Civil War and in the heat of World War II. The scale and intensity of the suffering caused by the world war prompted Pope Pius XII. At the end of 1941, to “put technology at the service of charity”.

Faced with this appeal, the Conference of Metropolitans – predecessor of the current Spanish Bishops’ Conference – decided in 1942 to create within Catholic Action the Secretariat of National Charity, the precursor of what is now known as Cáritas Española in the post-war period, baptized a few years as “the years of hunger”.

Faced with the arrival of a large number of war victims in Spain, Caritas has created a section dedicated to charity at international level. One of his first initiatives was in 1948 to supply more than 2.5 million pesetas worth of fabrics, wool and blankets to the Austrian Catholic Church. In addition, Caritas has taken in more than 8,000 Central European children who have been taken into their homes by thousands of Spanish families.

During these three quarter centuries of work, International Cooperation has provided humanitarian assistance in the worst disasters on record in the most remote parts of the world: the Rwanda genocide (1994), the Indonesian tsunami (2004), the Haiti earthquake ( 2010) or the food crisis in the Horn of Africa (2011).

Cáritas Española currently supports more than 60 projects in 40 countries in Africa, South and Central America; Asia; Eastern Europe and the Middle East. Most focus on ensuring the right to food, caring for creation, or responding to emergencies such as those occurring in Ukraine.

In the mid-1950s, when there was massive emigration to Europe and cities were beginning to form suburbs, the National Catholic Welfare Conference (American Caritas) offered Caritas its cooperation in the spring of 1954 to provide powdered milk for the children of all the dioceses. In the first five years, the American Social Assistance (ASA) administration accounted for 12,000 million pesetas and benefited four million people with 138 million kilos of food.

In the last years of the 1950s and 1960s, in the midst of Spain’s opening to the outside and the economic development process, Cáritas decided to make a definitive step from a “charitable action” to a “social action”. To this end, he created a social department to encompass the social and welfare services within the church. In January 1959, the “Section for the Elderly” was established and the National Charity Day was celebrated for the first time.

In addition, in 1965 Cáritas created the FOESSA Foundation (Promotion of Studies and Applied Sociology) to gain a better understanding of social reality, and two years later the first report of this new institution denounced the existence of seven million poor people in Spain, 20% of the national population.

“The FOESSA reports (1967, 1970, 1975, 1980-83, 1994, 2008, 2014 and 2019) not only marked milestones in the knowledge of the social situation in Spain, but also allowed us to refine the answers and accompany the beneficiaries of our action,” explained Natalia Peiro, Secretary General of Cáritas Española and Technical Secretary of the FOESSA Foundation.

Later, in the 1980s and faced with the high unemployment rate, Caritas decided to define unemployment as its preferred program by setting up the “Commissions to Combat Unemployment”. In addition, in 1984, Cáritas developed the Poverty and Exclusion study, which counted eight million poor people.

On the other hand, in the 1990s, the church’s social work opened the first shelters for HIV patients; and in September 1999, Cáritas was awarded the Prince of Asturias Prize for Concord.

On the other hand, after the financial crisis of 2008, whose repercussions lasted until 2016, in 2019 Cáritas presented its VIII FOESSA report, which revealed the consequences of this long recession: 8.5 million people in social exclusion, 1.2 million more than in 2007 ( before the crisis).

During this period, Cáritas Española responded by stepping up its programs of assistance to individuals and families suffering from new forms of poverty. To this end, he decided to start a fundraiser, which he called “Caritas in the Face of the Crisis”. Since its opening in 2008, it has become the channel of contributions that has received the most donations in the history of Cáritas Española. By 2020, his cumulative amount was more than 103 million euros.

This clear commitment to finding new ways to empower vulnerable people led to the creation of Moda-Re in 2018, a confederal textile project that collects and recycles used clothing.

Likewise, Cáritas has become a promoter of inclusion companies in Spain, with 2,225 jobs and 252 business units in 2021. 21% of people who participated in an employment program in the past year managed to return to the labor market.

CAMPAIGN AGAINST THE COVID PANDEMIC

Faced with the Covid-19 pandemic, Cáritas Española inaugurated the action “Every gesture counts”, which once again made it possible to break the donation record with a total volume of more than 64 million euros and, thanks to the solidarity of society, accompanied 2.85 million people a year 2020, 400,000 more people than in the previous year.

In this sense, in early 2022, the FOESSA Foundation presented the first complete radiograph on the social impact of the Covid-19 crisis throughout Spain, revealing that 11 million people are socially excluded, 29% more than in 2018.

On the other hand, in recent years, Caritas has published various proposal documents that were presented before the call for general elections and, among others, the income guarantee for households in poverty situations, the strengthening of the policy of international cooperation or the protection of unaccompanied foreign minors and their transition into adult life .

Regarding the challenges it faces, Caritas highlights: “continuing to be an area of ​​hope and opportunity for many people, in a context where social problems are not diminishing and the Christian community is fewer and fewer”.

“In the 75 years of its existence, Cáritas has reinvented itself. At every moment of Spain’s recent history, a new Cáritas has emerged to continue our mission of accompanying those who suffer most from inequality and poverty,” he said, confirming the President of Cáritas Española, Manuel Bretón.

- Advertisement -
Share
Facebook
Twitter
Pinterest
WhatsApp
Previous articleEx Menudo claims he was raped while in the band in new documentary ‘Menudo: Siempre Jovenes’
Next article8-year-old boy bursts into tears as he denies setting fire to his 6-year-old neighbor in Connecticut