Can I have a word about… Dominic Raab’s strange speech patterns? 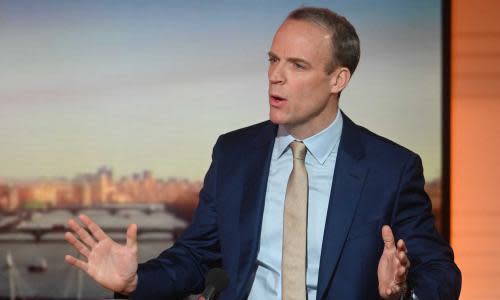 Look, I don’t want to sound mean, but I really feel I should call Dominic Raab, the deputy prime minister. He was being interviewed by Matt Frei on channel 4 news last week about the events in Ukraine and began almost all his answers to a question with the word “look”. He became so upset that I didn’t fully hear his responses, which of course could have been his intention. He was only marginally less irritating than those who answer a question with “then.”

Speaking of the Ukraine, I was reading Ambrose Evans-Pritchard in the Telegraph last week and dropped this one in my lap: “Will Russia’s patriotic generals agree to devastate the Varangian cradle of Mother Kievan Rus’ with cluster bombs? I doubt it.” Varangian cradle? Completely new to me.

Further investigation uncovered the following: “The Kiev Principality was founded at the location of present-day Kiev in the 9th century by Viking warrior-traders from Scandinavia (also called Varangians or Rus’) who mixed with the local East Slavic population.” Fascinating stuff and I’m grateful to Evans-Pritchard for pointing it out.

And as a simple Ukraine aside, a friend pointed out an interesting development in pub talk. Had you noticed, he asked, how, a year ago, every Bar Bore was a world-leading epidemiologist or immunologist, but now they are some of the world’s foremost military tacticians? And it’s true. I heard from a couple of men last week who would have given Carl von Clausewitz or Sun Tzu a chance.

Last week I wrote about some great jobs I missed out on, in that case “scenic ager” (someone who makes scenes on set look older). Now another has appeared: dark sky officer. This is a person who monitors light pollution, especially, it seems, in national parks. Since I often have trouble sleeping, I think this could be the perfect job for me. When I’m not monitoring Dominic Raab’s speech patterns, that is.

• Jonathan Bouquet is a columnist for the Observer