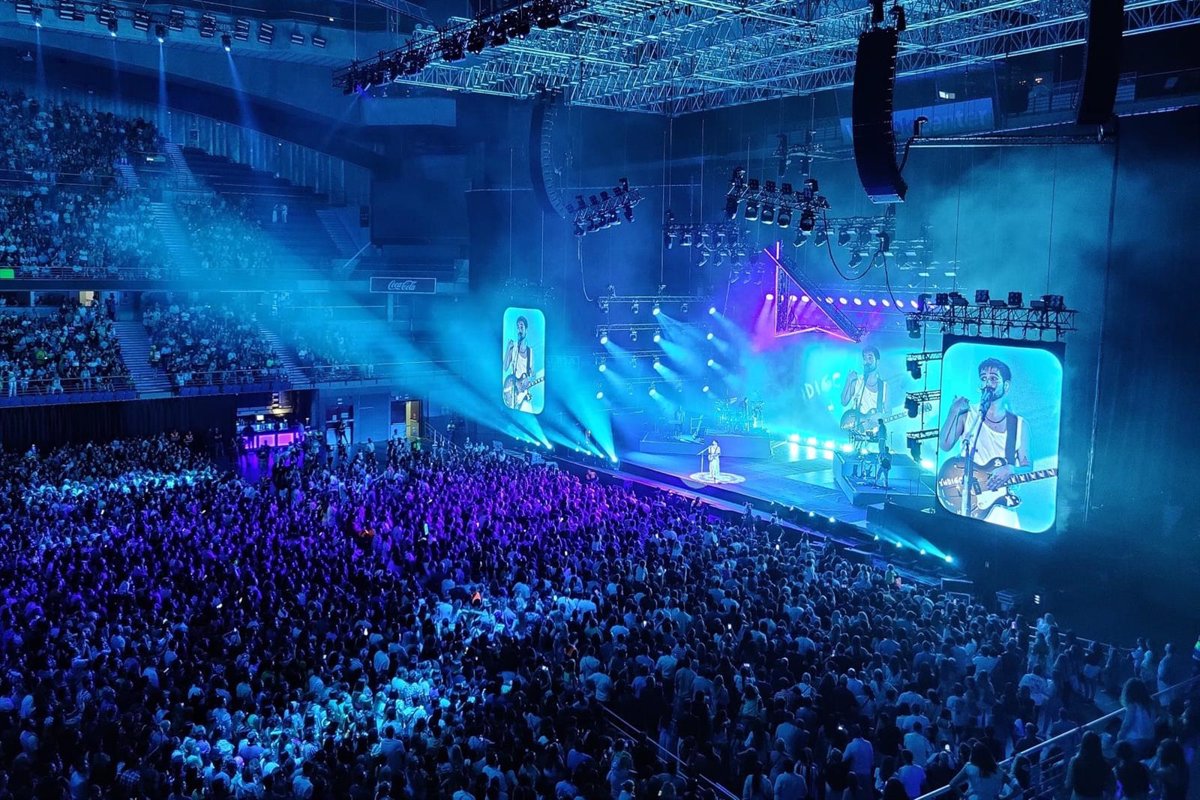 Colombian singer Camilo made his “tribe” vibrate in Madrid this Saturday night at the WiZink Center, where he hung the “No Tickets” sign and gathered 16,000 people of all ages to the rhythm of his music.

After stops in Pamplona, ​​​​Mérida, Seville, Córdoba and Paris, the artist has landed in the capital in the middle of his world tour “De Adentro Pa Afuera”, which also gives the name to his third album, which will be released next month of September.

At 9:37pm the lights went out and amid the applause and shouts of the audience, Camilo took the stage, barefoot, dressed in a white shirt and trousers, holding up his drumsticks to bang the timpani to the rhythm of ‘KESI ‘.

“Good night Madrid”, the Colombian artist greeted, admitting that the capital is like his “second home”. “It happens to me that in Madrid I don’t feel like a foreigner. When I tell my friends and family I’m coming, I tell them that I’m moving to Spain for a few months. I feel like that.” my second home,” said the singer.

After interpreting some of his most popular songs like “Favorito” or “Pesadilla”, the artist stopped to talk to his fans and encouraged those who are “heartbroken” to raise their cellphone flashlights. “The pain you feel is temporary, you will get over it,” he told them.

The night was full of surprises, such as the appearance of the artist and the singer’s wife, Evaluna Montaner, with whom he sang two of his most listened songs “For the First Time” and “Machu Picchu”.

Next, the artist delighted his fans with the song “NASA”, recently premiered with Alejandro Sanz, which he met precisely at the WiZink Center last year, and later the participants could dance to the rhythm of “Tattoo” or “Dance”. Millions’.

The artist did not stop spreading positive messages throughout the concert, emphasizing the “value of diversity”. “We live in a world where they tell us how to dress, what to buy or how many followers to have on networks, but no, you are worth who you are,” he said.

There were also emotional moments, like the moment he walked off stage to “hug” a girl who was carrying a sign asking for it, or when he dedicated the show to Carla and Corina, two people for Camilo’s songs were his company during “a very tough battle with cancer”.

The Colombian artist also has a memory of his daughter and has confessed that if the country where she was conceived acquired nationality, she would be Spanish. “Can you tell me a secret? Many indigenous tribes do not celebrate the day you are born, but the day they give birth to you. So if you got a passport from there, Indigo would be from Spain,” he said.

Likewise, Camilo wanted to create an environment closer to his audience by asking them to “keep their phones in their pockets” during a song. “I’m grateful for the networks and the internet, but are we going to give ourselves this moment?” the singer prompted.

Another surprise of the evening was the singer Carlos Vives, who took the stage to perform “Baloncito viejo” as a duo. Camilo has expressed his love for his country of Colombia, “one of the most biodiverse countries in the world”, of which he is “very proud”, declaring that when he has the opportunity to live it, he goes to other singers preceded him, as did Vives, whom he describes as his “model”.

Already at the end of the concert, Camilo, again together with Evaluna, made his fans jump to the rhythm of “Indigo”, a song that the couple wrote while pregnant, thinking of the arrival of their daughter, who is also the protagonist of the single that ‘Pegao’ has just released, songs with which the artist put the finishing touches to a night of optimism and good humor.