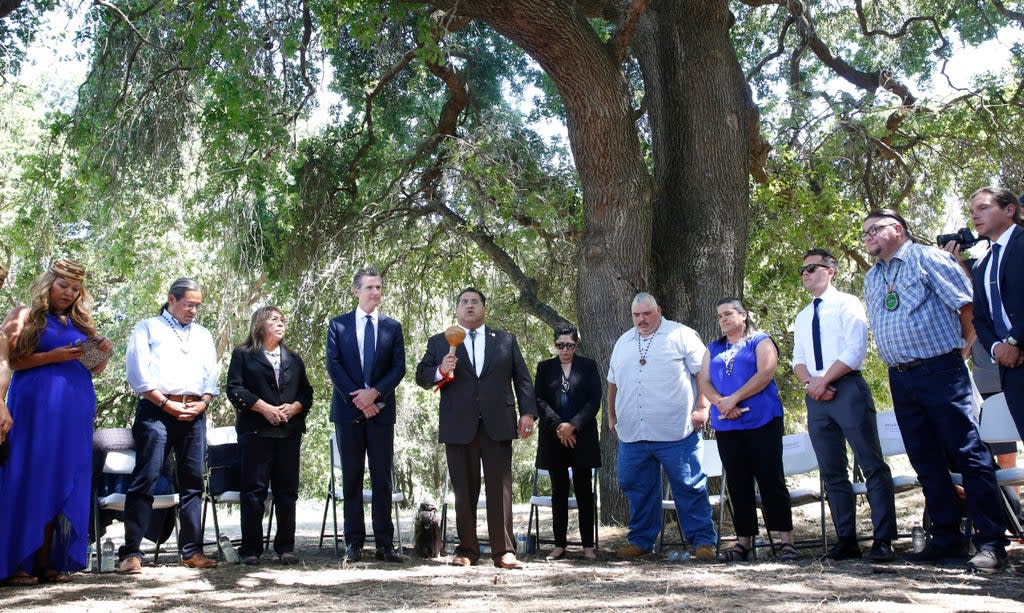 California Governor Gavin Newsom proposed Friday to give Native American tribes $100 million so they can buy and preserve their ancestral lands.

The proposal is part of his commitment to make sure nearly a third of California’s land and coastal waters are conserved by 2030. But instead of the government doing all of that, Newsom said tribal leaders should have a say. on which lands are they preserved?

The money is part of Newsom’s $286.4 billion budget proposal. The state legislature would have to approve the spending before it could happen.

The funding would not work like a traditional state grant program, where the state decides who gets the money and how they can spend it. Instead, California Natural Resources Secretary Wade Crowfoot said the administration is “committed to developing a structure or process where tribes decide where these funds go.”

“There’s so much that we need to learn, obviously, from tribal communities on how to do this,” Crowfoot said. “We have become disconnected from all the tribal ecological knowledge that we need to heal and care for the lands.”

The proposal comes amid a growing Land Back movement to return Native American lands to the descendants of those who lived there for millennia before European settlers arrived.

In addition to buying land, California tribes could also use the money for programs that address climate change and workforce development.

Crowfoot was speaking during a meeting of the California Council for Truth and Healing, established by Newsom in 2019, to “clear the record” of the “problematic relationship between tribes and state.”

Tribal leaders were enthusiastic about Newsom’s proposal but worried about how it would work in practice. In some cases, tribes have competing claims to the same land. Deciding who will get the money to buy that land would be difficult.

Kouslaa Kessler-Mata, a member of the Truth & Healing Council, said the state needed to have a policy to resolve those conflicts “so that we don’t wake up one day and say, ‘Guess what? Right now, that land that you thought was your ancestral territory is now being acquired by someone else.”

Caleem Sisk, Chief of the Winnemem Wintu Tribe, pointed out that some tribes, like his, are not recognized by the federal government and have few resources from other federally recognized tribes.

“We’re not in any position to really compete with them for a grant,” he said.

Crowfoot said he did not have a “quick and easy answer” to some of the council’s concerns. Ultimately, he said, the state will need “some kind of advisory body to help us shape this funding to be able to figure that out.”

Newsom signed an executive order in 2020 mandating that 30% of California’s land and coastal waters be preserved by 2030. He has called that goal a “mandate,” saying it’s important for California to reduce the effects of climate change.

Crowfoot echoed that sentiment Friday, saying preserving the land would allow more plants and soil to “really absorb that pollution from the atmosphere and store it in the ground.”

“Nature is necessary in this effort to combat climate change,” he said.