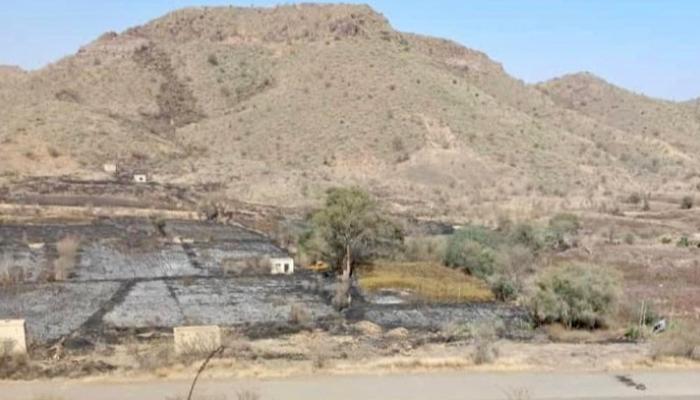 The Houthi militia continues its crimes against Yemeni civilians, the most recent of which was the explosion of a landmine with an entire family in Hodeidah and the burning of farms in Al-Dhalea.

At least 6 civilians, all from one family, fell on Wednesday after an anti-armor mine exploded on a city vehicle after the Houthi militia had planted it on the vital main road east of the city of Hodeidah.

Local sources said that a mine exploded near “Al-Matahin” and “Al-Grassy” roads, east of Al-Hodeidah, while dozens of vehicles were driving on the neighborhood street, killing 6 civilians from a family, including two kids.

Images published by Yemeni activists and followed by “Al-Ain Al-Akhbar” showed that several trucks that were near the blast site were damaged, while the vehicle carrying the family was blown into small charred pieces.

In Al-Dhalea, the Houthi militia set fire to farms and crops belonging to civilians in the north and west of the governorate.

According to local sources, the Houthi terrorist militia set fire to dozens of citizens’ farms, in the towns of “Al-Oud” and “Marais”, which caused the lighting of fires and the destruction of farms.

An image revealed extensive damage to several citizen farms in the “Al-Qaraniah”, “Al-Rafaqah” and “Al-Qirbi” valleys, located in the “Al-Zayla” area, north of the city of Maris . in a crime committed by the Houthi militia to abuse civilians and continue to subjugate them.

Farm owners said in press testimonies that Houthi terrorist elements set fire to their farms, which lasted for two consecutive days, in the towns of “Al-Fakher”, “Bilad Al-Youbi” and Al-Oud in the district of Qataba, north of the governorate

They noted that the fires spread to several neighboring houses and caused extensive damage.

And the Houthi militia had previously burned tanks and destroyed water wells to prevent farmers in areas controlled by northern and western Al-Dhalea from conducting their businesses, depriving hundreds of families of their livelihoods, according to the same source.

The ongoing crimes of the Houthis add to a black record of starving the population by destroying livelihood opportunities and depriving them of their assets, between war crimes and their renewed and dangerous violations of international humanitarian law.