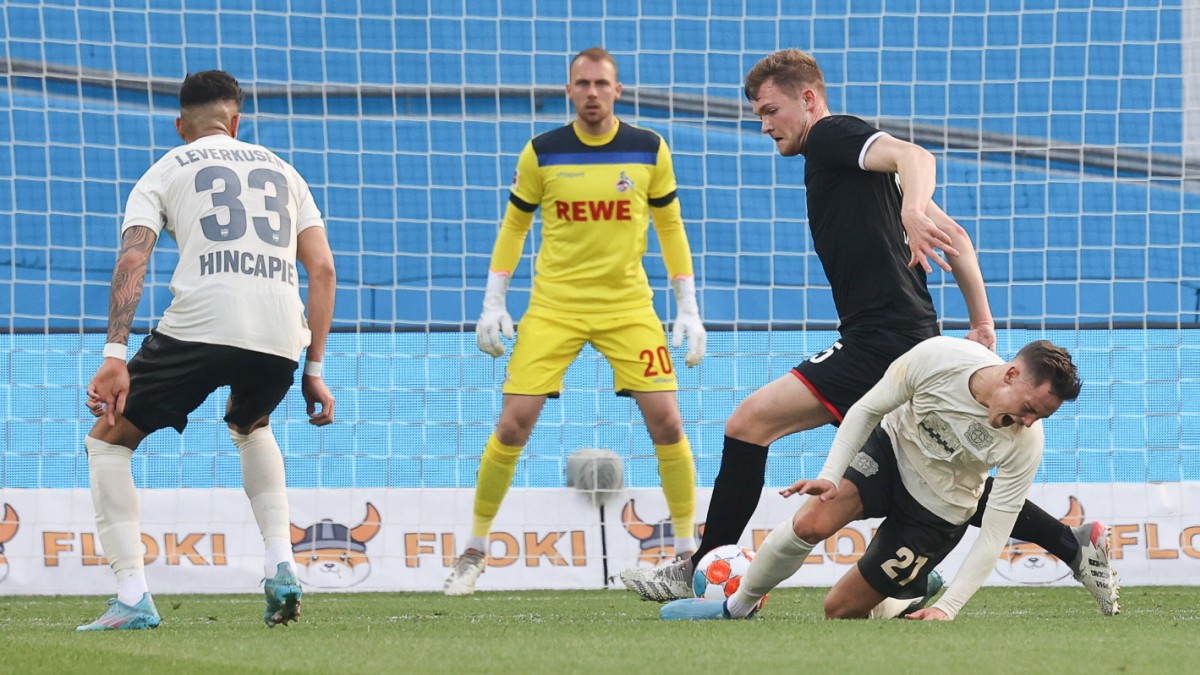 Steffen Baumgart had already won before the match, namely the Rievkooche, the bronze potato pancake, which an initiative from Südstadt Cologne awards for special merits at home. The coach of 1. FC Köln had campaigned for a project for the homeless.

Baumgart experienced another form of local color when he and his team visited neighboring club Bayer Leverkusen on Sunday afternoon. Things were remarkably hostile at the Bayarena, not only between the groups of spectators who cursed each other in a good way, but also between the actors who attacked each other venomously. It was a close, hectic and noisy neighborhood duel, and when the hard-fought but good referee Sascha Steegemann blew the final whistle at 17:27, the inhabitants of Cologne celebrated a 1-0 victory, which was happy but not undeserved by their passionate commitment. FC had beaten Bayer with their best means and on Steffen Baumgart’s relentless tour, but a momentous incident had also come to his aid.

The scene that would define the derby emerged from one of the many robust tackles that characterized the game. Leverkusen midfielder Florian Wirtz headed the ball in front of the penalty area, defender Luca Kilian stepped in and energetically used his body. He knocked Wirtz out of the rhythm with a hip check, without fail, the so-called legal difficulties, but the 18-year-old tripped, fell and went down. While the doctor and paramedics attended to him, the Cologne fans behaved with malicious chants: Wirtz had changed sides two years ago after his training at Geißbockheim. He now had to be taken off the field on a stretcher in pain, accompanied by mocking farewells from the Colonia curve. It quickly became clear that there was cause for concern, after an MRI, the devastating diagnosis followed on Sunday: torn anterior cruciate ligament in his left knee, a rupture several months old.

This news will keep Bayer 04 busy for a long time after the match, but the loss of their central organizer also caused an abrupt break in Leverkusen’s structure. Wirtz’s opening was missing, the passes ordered, his teammates’ commitment, enthusiasm and speed were not lacking, but the simplicity and the plan were lost. Wirtz had coordinated all the dangerous attacks until his withdrawal, and there were more than a handful of them. It was probably due to the hectic atmosphere of the derby that the numerous scoring opportunities on both sides did not bring any goals. Sometimes Wirtz served the Brazilian Paulinho, sometimes the fast Moussa Diaby, but the teammates failed on their own or by the strong goalkeeper of Cologne, Marvin Schwäbe.

The team from Cologne had started with the intention of disrupting Leverkusen’s fast combination and counterattacking game with stiff pressure and tough duels. The concept certainly didn’t surprise Bayer manager Gerardo Seoane, but it still proved its worth. Bayer tried in vain to implement its standard program. Leverkusen certainly remained dangerous, especially if they managed to intervene in Cologne’s somewhat risky warm-up game. When Diaby ran a back pass from Ellyes Skhiri, it was again Schwäbe who avoided the worst by pushing the Frenchman aside.

After the break, the game was the same as before. The Cologne team successfully disrupted Leverkusen’s circles and regularly went into dangerous attack mode. Baumgart’s double substitution in the 64th minute proved to be a golden move. Substitutes Dejan Ljubicic and Kingsley Schindler gave FC the lead less than three minutes later (67′).

Things could have ended better for Bayer, there were still some first-class chances, but winter substitute Sardar Azmoun missed twice to make his home debut special.