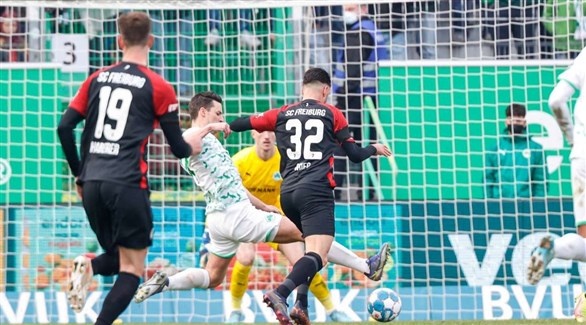 Freiburg missed out on a chance at third place in the German league, albeit temporarily, after falling into a goalless draw trap against hosts Greuther Fürth on Saturday on matchday 27 of the competition.

Freiburg raised its score to 45 points in fourth place, a goal difference behind Bayer Leverkusen, who visit Wolfsburg on Sunday.

Fort, meanwhile, raised his score to 15 points in last place.

In another game on the same day, Hertha Berlin defeated Hoffenheim 3-0.

Niklas Stark put Hertha Berlin ahead in the 39th minute, before Isaac Belfodil scored the second goal in the 63rd minute, while Lucas Tousart scored the third in the 74th minute.

Hertha Berlin raised their score to 26 points in 16th place, while Hoffenheim’s balance froze at 44 points in sixth place.

Mainz swept wild card Armenia Bielefeld 4-0 in matches in the same round.

Jonathan Burkhardt put Mainz ahead in the first minute, before Moussa Niakhat scored the second goal in the 65th minute from a penalty.

In the 75th minute, Burkardt scored Mainz’s third goal from a penalty, and likewise Marcus Inverjetsen scored the fourth goal in the 79th minute.

Mainz raised its score to 37 points in ninth place, while Armenia Bielefeld’s balance froze at 25 points in penultimate position.

And Stuttgart snatched a thrilling 3-2 victory from their guest Augsburg.

Augsburg advanced through Andre Hahn in the sixth minute, before Waldemar Anton equalized for Stuttgart in the 44th minute, and a minute later Michael Grigorich scored the second goal for Augsburg.

Stuttgart scored the equalizer through Omar Marmoush in the 79th minute, before his colleague Thiago Thomas added the third goal in the 85th minute.

Stuttgart raised their score to 26 points in 14th place, while Augsburg’s balance froze at the same balance in 15th place, with Stuttgart superior on goal difference.