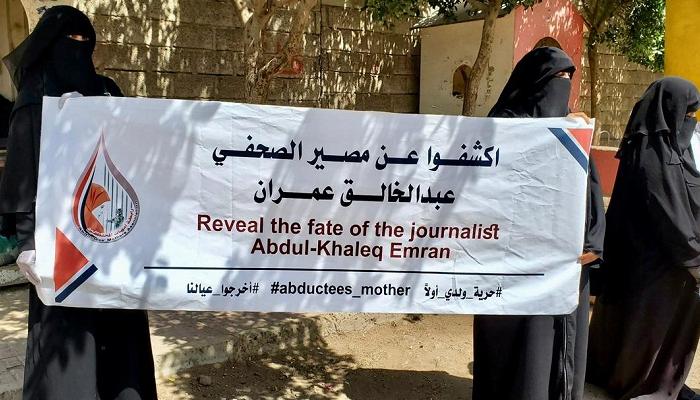 The Houthi militia has intensified the persecution against Yemeni journalists detained in its secret prisons, after they were subjected to excessive and brutal torture and repression.

Despite his arrest for the eighth consecutive year, his deteriorating health, and death sentences from Houthi militias, the coup plotters raised the price of their crimes, as 3 journalists face a fatal fate inside the detention centers of the militias in Sana’. a.

According to the Yemen Journalists Syndicate, on Sunday, journalists “Abdul-Khaleq Omran”, “Tawfiq Al-Mansoori” and “Harith Hamid”, detained by militias since 2015, were subjected to excessive and brutal repression at the hands of of the coup elements in one of their detention centers in Sana’a.

In a statement received by Al-Ain News, the Yemen Journalists Syndicate stated that it had received a report from the families of colleagues Abdul-Khaleq Omran, Tawfiq Al-Mansouri and Harith Hamid, who have been detained since 2015 in Sana’ to. , stating that they were beaten, ill-treated and tortured inside the Sana’a prison.

The Union condemned the arbitrary methods used by the Houthi militia and held it responsible for this systematic crime against journalists detained in Sana’a.

The statement deplored the Houthi militia’s insistence on torturing journalists at a time when the Union and the International Federation of Journalists are mounting an international campaign to free journalists who have faced an unjust death sentence and been living in very harsh and illegal detention conditions for almost 8 years.

The Journalists Union renewed its call for the prompt release of journalists detained by Houthi militias, and called on all organizations concerned with freedom of expression to continue efforts to end their suffering.

The Union emphasized that these crimes against fellow journalists will not have a statute of limitations, and the perpetrators will not go unpunished, and must receive a dissuasive and fair punishment.

Since their coup in September 2014, the Houthi militias have detained dozens of journalists, 12 of whom remain imprisoned, while 4 of them are at risk of death in the context of the Houthis’ unjust death sentence. It is “Abdul-Khaleq Omran”. , “Akram Al-Walidy”, “Harith Hamid” and “Tawfiq” Mansouri”.

And last month, the International Federation of Journalists and the Yemeni Journalists’ Union launched an open campaign to send a message to the UN Special Envoy for Yemen to pressure the Houthi militia to release the detained journalists.

A recent report by the Media Freedoms Observatory in Yemen recorded, last February, 6 cases of violations by the Houthi militia against Yemeni journalists, ranging from 3 threats and 2 arrests.

It also documented a trial case, in which a Houthi court sentenced journalist Nabil Al-Sadawi, an employee of the Yemeni “Saba” news agency, to 8 years in prison, after being held by the Houthi militia for more than 6 years.