Brussels asks Ukraine to join the EU, but sets conditions 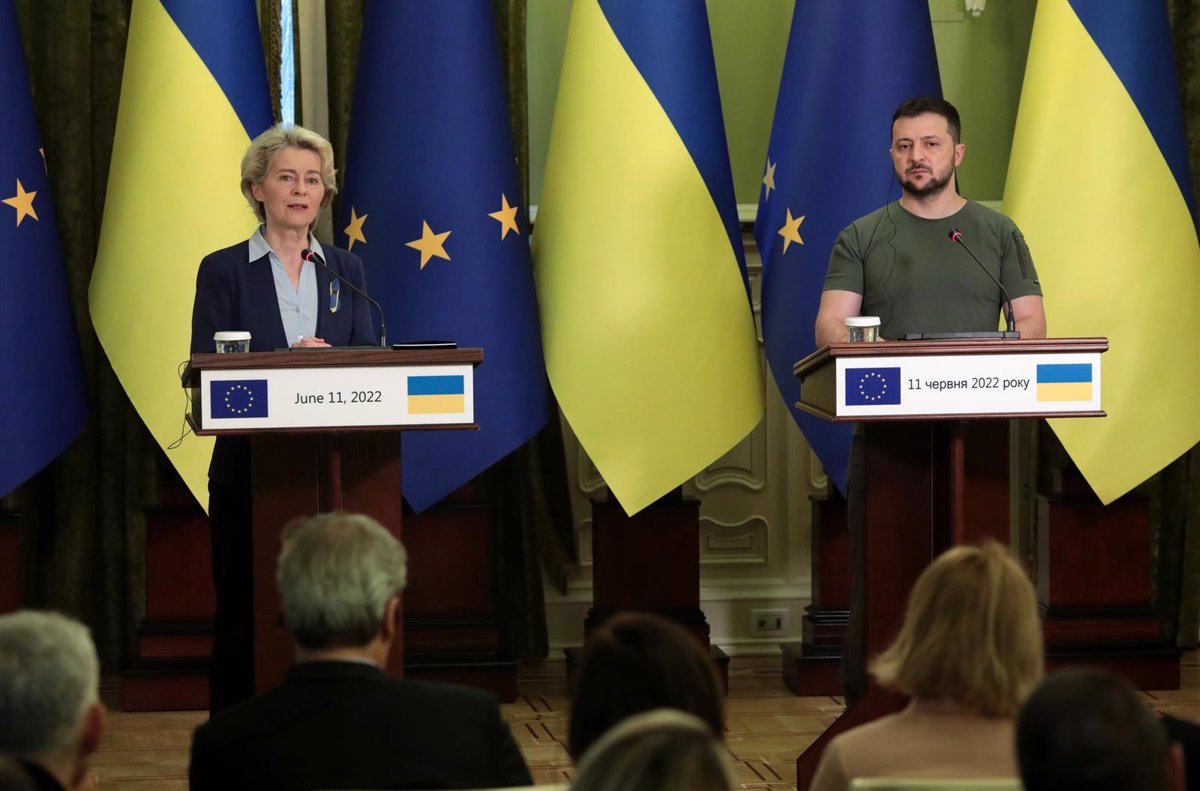 
Ursula von der Leyen, President of the European Commission, and Volodimir Zelensky, President of Ukraine, at a recent meeting in Kyiv – -/Ukriform/dpa

The European Commission proposed this Friday to grant Ukraine candidate status for joining the European Union, although it says it will set a number of conditions that will form the basis for next week’s debate by European leaders , in which you will have the final word on the candidacy of Kyiv.

“We have a clear message: yes, Ukraine deserves the European perspective and should benefit from being a candidate country,” European Commission President Ursula von der Leyen said at a press conference in Brussels, where she was dressed in yellow and black Blue of the Ukrainian flag participated.

Von der Leyen acknowledged Ukraine’s progress on European policies but stressed “the need to consolidate reforms and ensure their implementation”. “Of course, not everything can be achieved as long as the war on Ukrainian territory continues,” he admitted, but stressed several times that Brussels is taking the step to understand that judicial reforms are being carried out to fight against corruption and to protect necessary minorities.

Therefore, he stressed that the accession rules are “dynamic” and allow for reversal if the reforms undertaken backfire. “It’s the important thing about the process, which shows that if there’s progress, stalling or setbacks, it’s the country itself that has it in its hands,” he said.

“Today we are taking the first decision,” stressed Enlargement Commissioner Oliver Varhelyi, noting that the start of accession negotiations is a possible step that will come when the conditions are met, but that “it’s not time yet is”. “Then we have to think about whether the criterion is met in order to take the step to start accession negotiations,” said the Hungarian commissioner.

The European Commission will monitor Ukraine’s progress under the set conditions and an assessment is expected by the end of 2022, the opinion says, which recalls that according to the methodology, the accession steps can be reversed if the imposed conditions are not met will be fulfilled. European sources explain that the new accession framework, reformed by the 27 two years ago, allows Ukraine to withdraw its candidate status if a step backwards on the European path is recorded.

Regarding the presence of Russian troops on Ukrainian territory, European sources have pointed out that the EU does not recognize “territorial amputations”, ie Russian presence in Ukraine, Moldova and Georgia, but in any case remains in Brussels for a later solution these problems.

During the press conference, the President of the European Commission pointed out the necessary reforms to move forward on the European path. In particular, he mentioned that there is still much work to be done in relation to the rule of law, such as the appointment of judicial advisers, the establishment of a functioning anti-corruption agency and the results of the recently adopted law against oligarchs. You also mentioned the Minority Law, which the Ukrainian authorities still have to approve.

On the economic front, the Brussels document points to the country’s need to implement reforms to improve the functioning of its economy and highlights the importance of managing economic aid in the midst of war. “The country’s ability to withstand competitive pressures in the EU will crucially depend on how post-conflict investments in Ukraine are designed and implemented to enhance its physical capital, improve educational outcomes and stimulate innovation,” stressed the report, which does not concrete conditions about the status of the Russian invasion.

With regard to the economic criteria, the report also points out that it must be taken into account that the high degree of uncertainty linked to the ongoing war and its development affects the predictive power of the economic assessment, which is largely based on the data available before the war. .

SUPPORT FROM FRANCE AND GERMANY

The decision comes just a day after France and Germany expressed their full support for the granting of candidate status during their visit to Kyiv. The recommendations and arguments from Brussels will serve as the basis for the leaders’ debate at the summit on June 23-24, where the 27 will decide not only how to respond to the Ukrainian club’s entry bid, but also those from Georgia and Moldova.

It will be in this debate of European leaders that these conditions will be further outlined, the “roadmap” in the words of French President Emmanuel Macron. That means any decision by the 27 on Ukraine’s candidate status must be unanimous.

Brussels prepared its opinion in record time, issuing an opinion in a month that normally takes almost a year, after the Ukrainian authorities also responded to the technical questionnaires with unprecedented agility. Ukraine applied to join the Community Club a few weeks after the February 24 Russian invasion ordered by Vladimir Putin.