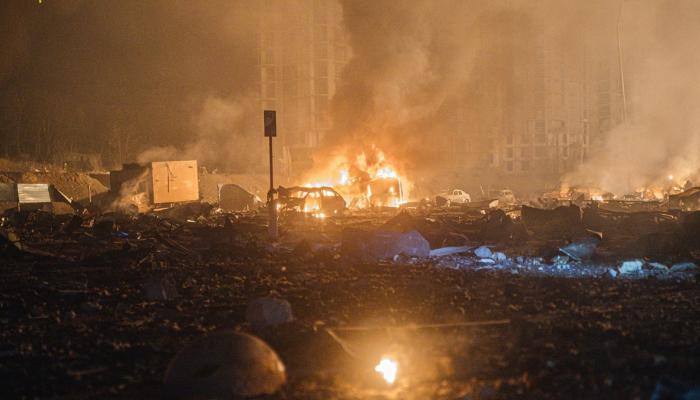 With the Russian military operation in Ukraine entering its 26th day, British intelligence expected Moscow’s move towards the capital, kyiv.

A British Defense Ministry intelligence assessment of developments in Ukraine indicated on Monday that heavy fighting continues north of the Ukrainian capital.

The assessment stated that “Russian forces advancing towards kyiv from the northwest have stopped.

The estimate says that the Ukrainian forces were able to engage the forces advancing from the direction of Hostomil to the northwest, noting that the bulk of the Russian forces are still more than 25 kilometers from the city center.

“Despite the lack of progress, kyiv remains Russia’s main military target and it is likely to prioritize an attempt to encircle the city in the coming weeks,” the assessment added.

The city was shaken by a huge explosion in the night from Sunday to Monday, and fires could be seen among the ruins of the “Retrovel” shopping center, according to the mayor of kyiv.

Emergency services said on Facebook that “the shelling caused a multi-layered fire of the shopping center located in the Podilsky district, north-west of the city, and set several vehicles on fire.”

Russia says its goal in the military operation is to eliminate neo-Nazis in the neighboring country, which Western leaders and observers viewed as a desire to topple the government of President Volodymyr Zelensky.

Russian forces have surrounded kyiv since the first week of the military operation, but it seems that they have not managed to tighten their siege, amid fierce resistance from Ukrainian forces, who are receiving Western weapons to support them against one of the strongest armies in the world.

Moscow says talk about the failure of its forces to storm kyiv and major cities is a Western hoax meant to provoke it to rush in and dump civilian casualties to distort its image.