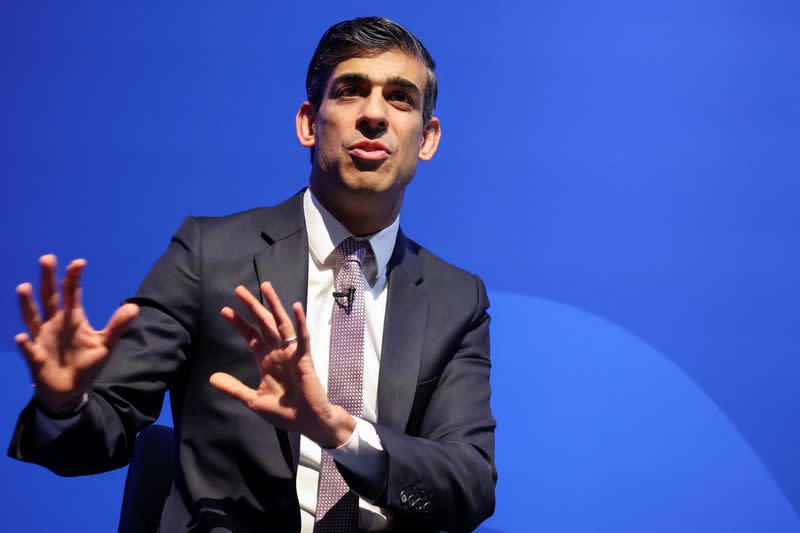 By William Schomberg and Alistair Smout

LONDON (Reuters) – British Chancellor of the Exchequer Rishi Sunak, preparing for a budget update this week, said on Sunday he would help where he could with lowering the cost of living, but warned that the crisis in Ukraine and sanctions on Russia would add to the problems of the economy.

Britain and its allies imposed sanctions on Russia and energy prices soared after the invasion of Ukraine, intensifying the rise in inflation.

Asked by BBC television if he planned to step in and help households with their energy bills, Sunak said: “Of course I am and people can judge me for my actions over the last two years where we’ve been able to mark the difference”. “

But he said the government could not solve all problems.

“I wish I could but I can’t, especially when it comes to global inflationary forces at play,” Sunak said.

He is due to deliver a Spring Statement on public finances and his tax and spending plans on Wednesday, with inflation heading to 8% soon and the economy set to slow after its post-pandemic recovery.

Sunak said he understood the impact on people of rising prices, but added that reducing the value-added tax on fuel would be the opposite of targeting support for those facing the most constraint.

He declined to comment on whether he planned to cut a separate tax on fuel, a move called for by the opposition Labor Party.

Sunak announced measures in February to soften the impact of energy bills on households, but prices have continued to rise since then, prompting other governments to respond. France and Sweden will subsidize fuel costs for cars, while Germany and Italy are considering similar plans.

Sunak repeated his plans to cut taxes in the future: government tax collections will rise to their highest level in 70 years to pay for Sunak’s increased spending from COVID-19, but said a planned increase in national insurance will start in April to finance spending on health and social care was fair.

Asked if there was a risk of a recession due to the Ukraine crisis, Sunak said he would not speculate.

“What I would say to people is that they should have confidence in the strength of our economy,” he told Sky News. “But the picture is uncertain…because of what is happening in Ukraine.”