breast that does not cover the hand… 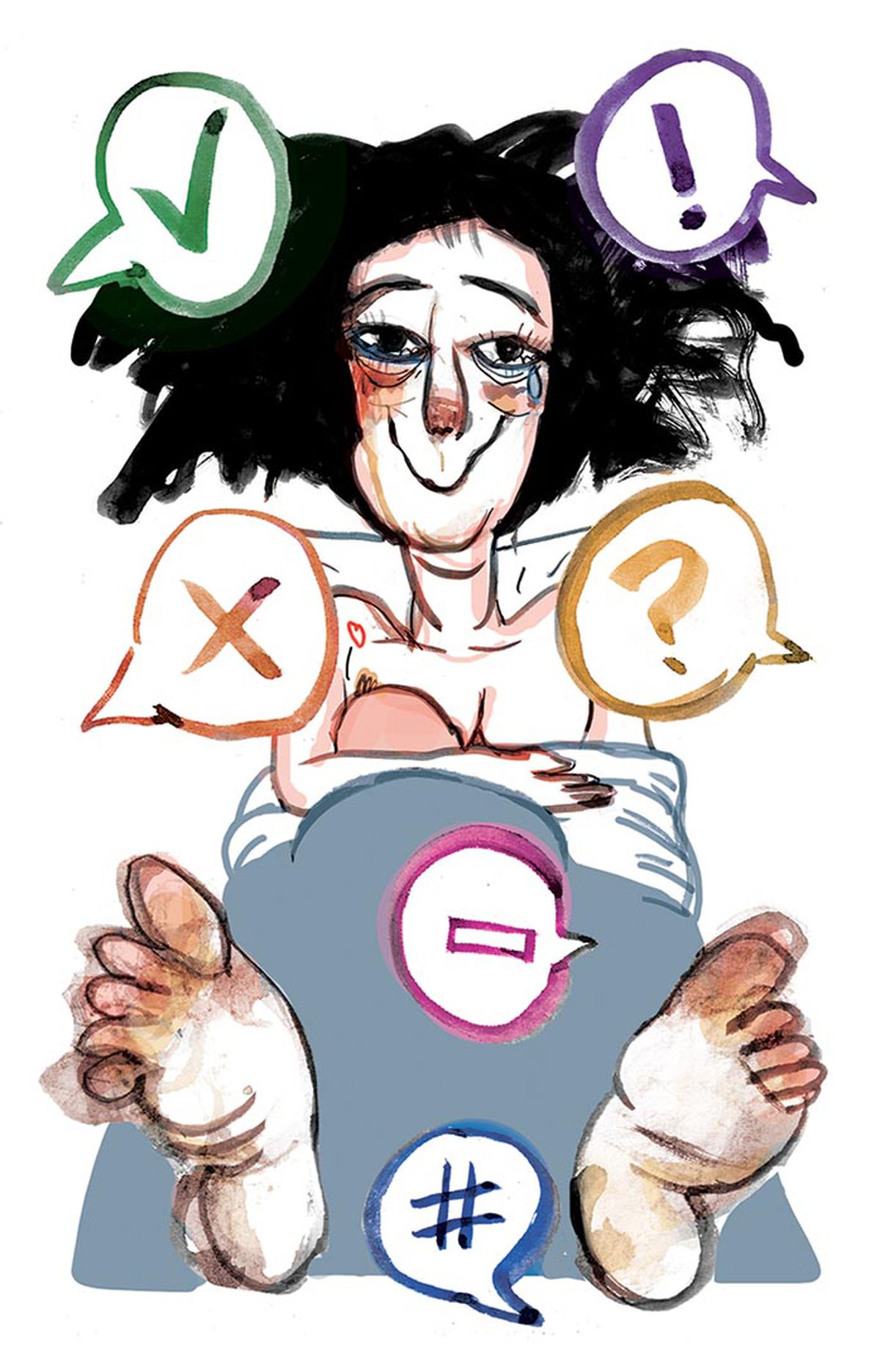 In the United States, six weeks after delivery, the obstetrician will give you a questionnaire to identify the possibilities of depression. I must have ticked the wrong box and they put me in touch with a psychiatrist. The consultation was virtual. At the appointed time, the doctor appeared on the other side of the screen. He couldn’t see his office because he had chosen a white sandy beach and a turquoise sea as the background, framed by palm leaves which, according to the framing of the time, seemed to come out of the doctor’s head like stiff strands of hair. I figured the date wouldn’t end well with this start. The curtain also opened with a yawn from the psychiatrist, I don’t know if he didn’t know I was already connected or if it didn’t seem relevant to him to hide the understandable reluctance he had to speak to me on this Polynesian beach . It hadn’t been three minutes before he let me go bluntly: “I’m going to prescribe you anxiolytics because I can see that you’re anxious and being anxious isn’t normal.”

Dozens of images and messages flashed through my mind: on the same day, three women had been stabbed in the face on the subway, another woman had been thrown onto the tracks, there had been a shooting near my neighborhood. That same day, I found out that my neighbor is a pederast who was recently released from prison for raping a nine-year-old boy. I don’t have to tell the reader the magnitude of the tragedy in any other part of the world in the same day. Shortly thereafter the invasion of Ukraine would come. And there was this doctor and his laziness on the other side of a screen telling me that it’s not normal to be scared. But the thing is, he also said it to a new wife who, although he couldn’t see it, was sitting on an inflatable donut-shaped pillow because I was obedient on the day of delivery and during the final labor pains I was out of my Butt pressed like there’s no tomorrow, yes, out of my ass, because that’s what the chorus of nurses told me: “Pull with all your might, like you’re constipated!” I had no constipation at all, I had the head (big, btw ) of a girl in my vaginal canal, but this was not the time to argue and I took the advice to the letter. Yes my girl was born with a shotgun but more than a vaginal birth I felt like it was an anal birth. Of course, I can’t fault the psychiatrist for not knowing the particular circumstances of my sphincters, but apparently he didn’t know what a professional should know either, so I replied without too much diplomacy that it seemed normal for a woman who was doing it right now I was scared when I gave birth. The abnormal thing would be that its soft matter was a puddle of oil.

A woman who has just given birth cannot sleep for more than two hours at a time. If you decide to breastfeed and the baby is gluttonous and has strong gums, you’ll get some hickeys on your nipples that will make you laugh at the ones on your neck during puberty. I have recovered forgotten prayers for the calluses to come out as soon as possible, a Hail Maria before putting the girl on my chest. Also, a woman who has just given birth has to constantly change diapers, which she didn’t know existed until she put them on, from tailbone to navel, and when she looks at herself in the full-length mirror with a giant pair of panties, she looks more like a geriatric patient if it weren’t for her breasts being higher and firmer and bigger than ever who won’t believe her self esteem will rise because a woman who has just given birth also knows that the milking room gets empty as soon as her baby doesn’t need or want it anymore or just when the stress of breastfeeding or self-milking with that little devil device called a breast pump and sucking your nipples with real evil is so great that she decides to go to the bottle Go and get any comfort you can from the effects on your pup’s immune system or the progressive decline in their large teats. But I continue: A woman who has just given birth not only experiences a hormonal upheaval that makes her sensitive to details that previously didn’t interest her, but she must endure the avalanche of nonsense in the midst of this upheaval in the world , who won’t stand still because you’ve given birth to a child, and she’s showered with advice from family and friends, advice that contradicts one another, and that includes that from women who don’t have children and men who, how I imagine, also not born. A woman who has just given birth when she sneezes, laughs or coughs feels her diaper, sometimes freshly changed, getting soaked again, it could be urine, it could be blood, it could be a thing you don’t even identified. But that’s the fault of the woman who just gave birth: your cousin has already warned you that in the last weeks of pregnancy you have to do the so-called perineal massages, that is, a kind of masturbation into nothingness, without orgasm, touching ten minutes a day so that the Vaginal muscles gain flexibility, and if it bothers you, all the better, it means it’s working. Oh, and even if you have a stomach that doesn’t even allow you to see your feet, it’s better to do the massage while crouching. Sorry: I prefer to pee in my diapers. If a woman who has just given birth has the courage to pick up a small mirror and look at her vagina, she will wonder if that will ever be a vagina again. And if her vagina is intact, that’s because of a cesarean section: the only surgery that opens five layers of tissue and expects the mother to not just get up a few hours later, but tend to a body day and night. . it depends on you. A woman who has just given birth wakes up and puts her hand on her baby’s chest and checks if it is breathing, this baby who is showing with its cries that it has enough lung capacity for three bodies. There comes a time when a woman who has just given birth, whenever she has the slightest opportunity to go back to work for even a few hours a day, feels like she’s enjoying the steam rooms, massages and aromatherapy treatments of a spa enter.

According to one of the most lucid minds of our time, historian and writer Yuval Noah Harari, “The commercial success of a company is measured only by the number of dollars in its bank account and not by its happy employees, the evolutionary success of a species is measured by the number of copies of its DNA.” measured. 1,000 copies is always better than 100 copies, even if it means keeping more people alive in worse conditions.”

It seems that much of psychiatry has come to the logical conclusion that it is easier to change the individual than to change the world, even if that means drugging a sane person to adapt to a world gone mad to adjust. The most important thing for the success of a species is not its luck.

Needless to say, I chose to accept the normal fear of a newborn mammal, and as I wait for my breasts to defecate, I resort to the comfort of my grandmother’s popular saying: “Breasts that shake hands not covered, it is not a breast but an udder”.

Marina Perezagua is a writer, author of Six ways to die in Texas (Anagram).