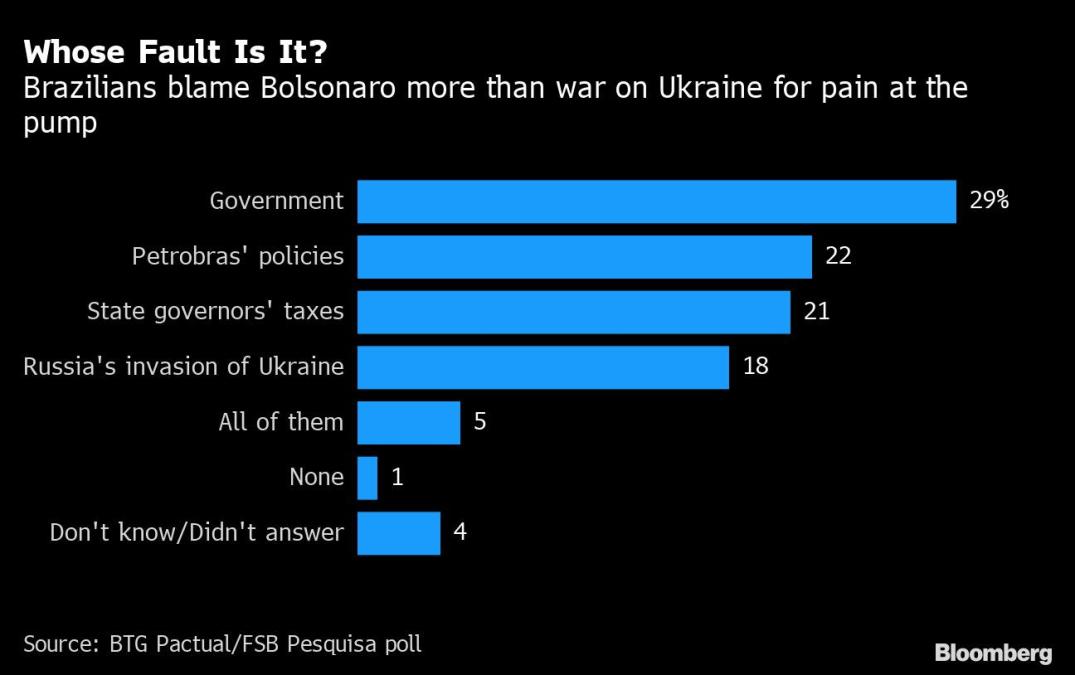 That’s what a survey by brokerage BTG Pactual SA and pollster FSB Pesquisa revealed on Monday, following state-owned Petróleo Brasileiro SA’s decision to raise fuel prices by as much as 25% earlier this month.

According to the survey, 29% of respondents said the government is to blame for rising fuel costs, while 22% pointed to the policies of the national oil company, known as Petrobras. Tariffs imposed by state governors were considered the reason for the increases by 21% of those interviewed.

Only 18% of those surveyed said that the war in Ukraine is the cause of the increase in fuel costs.

The additional inflationary pain caused by the war is the latest obstacle to Bolsonaro’s re-election campaign. His popularity, which had been surging earlier this year as economic prospects improved and fears of a pandemic faded, has begun to suffer as double-digit inflation reduces the purchasing power of Brazilians.

Former President Luiz Inácio Lula da Silva, the favorite in the October elections, would capture 38% of the spontaneous voting intention in the first electoral round, while Bolsonaro would obtain 27%, according to the survey.

The survey interviewed 2,000 Brazilians by phone on March 20. It has a margin of error of plus or minus 2 percentage points.

- Advertisement -
Share
Facebook
Twitter
Pinterest
WhatsApp
Previous articleWhy do some Islamic countries differ at the beginning of the month of fluorescence?
Next articleInterview with Vitali Klitschko: “I am willing to sacrifice my life for my country”