Brazil leads the gain of emerging ETFs by commodities 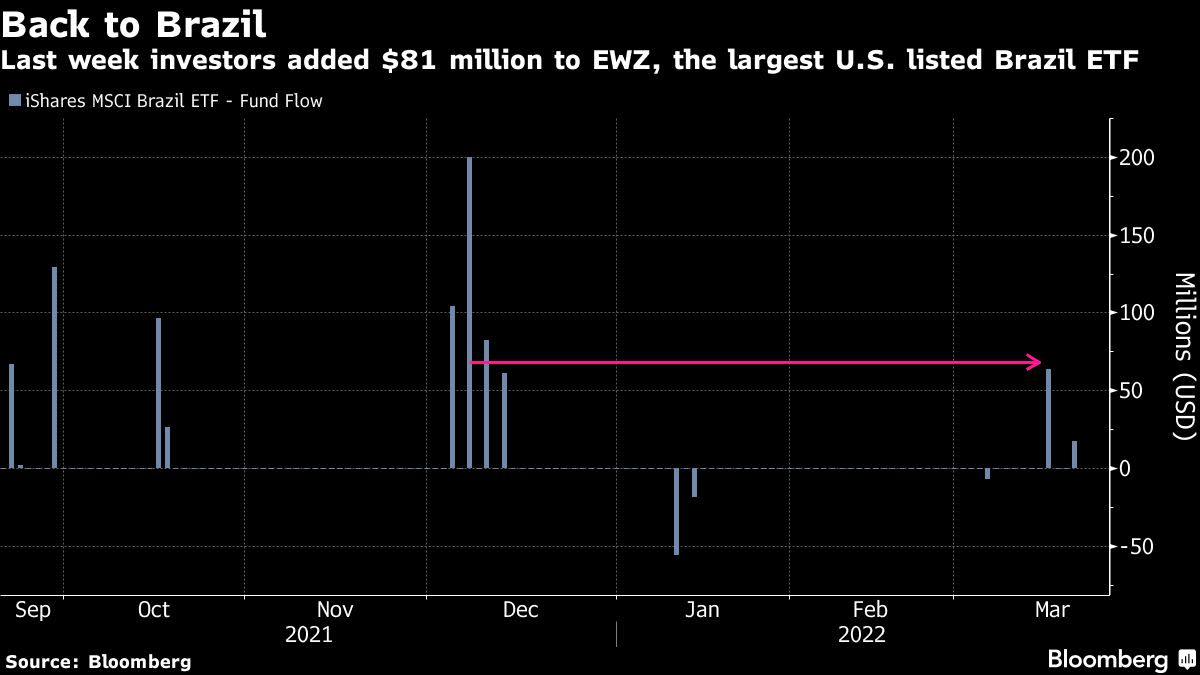 The $5.9 billion iShares MSCI Brazil ETF, known as EWZ, received $81 million during the week ending March 18, the most since mid-December. Factoring in the country’s participation in ETFs focused on emerging markets, Brazilian stocks received a total of $224.7 million in the period, leading gains in the developing world, according to data compiled by Bloomberg.

Brazil stocks are among the favorite bets of global money managers, who have benefited from low prices after years of poor performance. The benchmark Ibovespa index is the world’s second-best performer this year in US dollar terms, trailing only Peruvian stocks. Even after the recent rally, the Ibovespa is trading at 7.7 times futures earnings, down from its 10-year average of 11.7 times.

Non-residents were net buyers of Brazilian shares on the local market in 50 of the last 52 sessions, totaling 75.2 billion reais ($15.2 billion). But unlike the local market, EWZ had seen no inflows this year, even as its shares are up more than 25%, vastly outperforming the $26.9 billion iShares MSCI Emerging Markets ETF known as EEM, which is down 9 percent. %

Brazilian stocks are also benefiting from a rise in commodity prices and Russia’s exclusion from emerging market benchmarks, as well as hopes that the winner of October’s presidential election will not derail the economic policy of the nation.

While optimism from abroad has fueled a rebound in the nation’s local assets, gains have been tempered by increased skepticism from locals.

- Advertisement -
Share
Facebook
Twitter
Pinterest
WhatsApp
Previous articleThe return of the soul to the oldest hotels in Cairo… 1,400 million pounds for the development of “Pastor”
Next articleZelenskyj wants the Ukrainians to vote on any “compromise”.