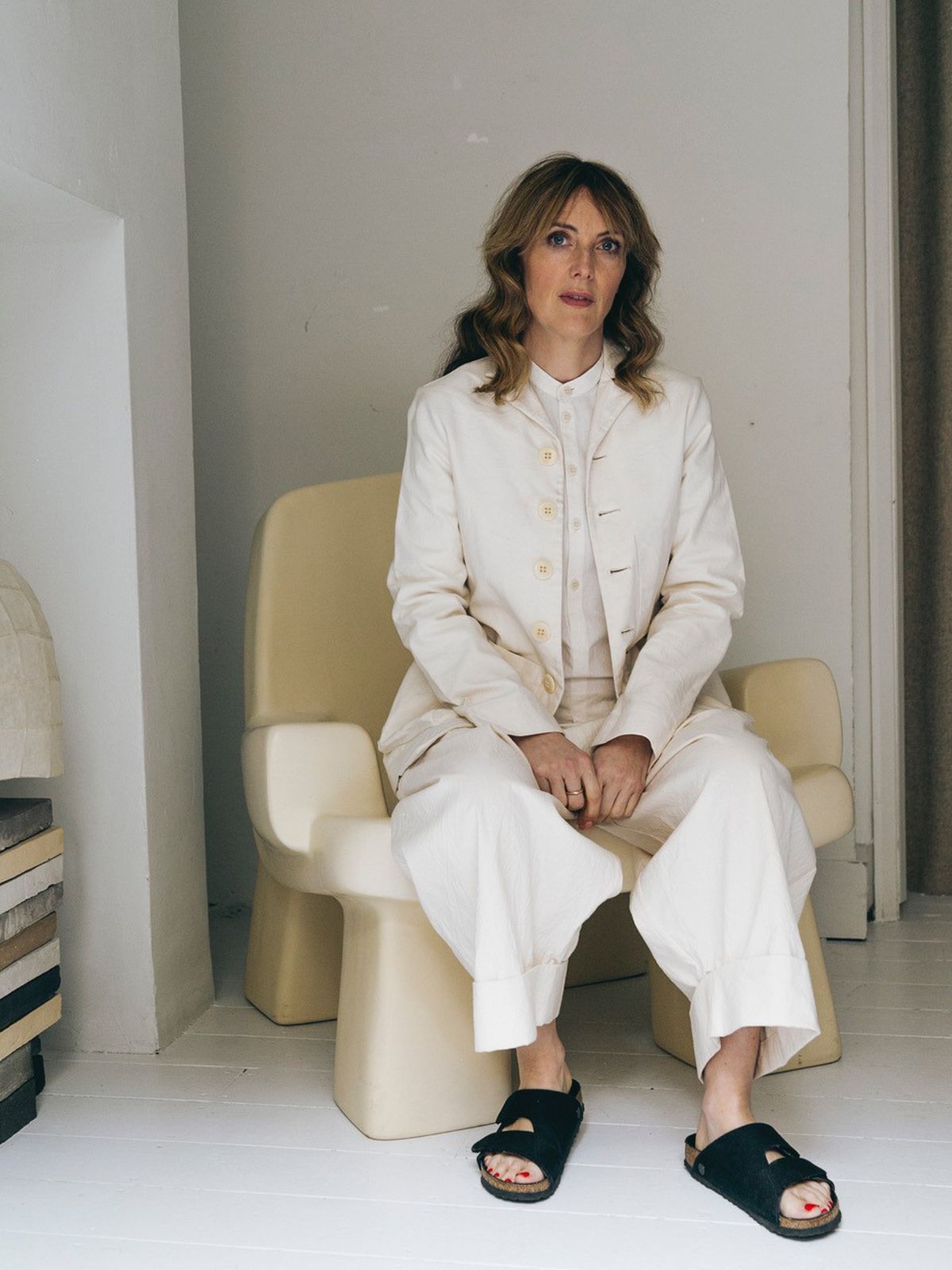 In September 2012, more than 40 threadbare looking coats floated like the ghost of Christmas past over one of the lanes leading off London’s Seven Dials Square. The paint-stained coats were eight feet tall and part of an art installation created by the design studio too good in the context of London Design Festival. The idea was to remind citizens of a forgotten part of their city’s history. “My sister Erica and I wanted to pay tribute to the traditional UK jobs that have disappeared from this part of London. Inside each of the 40 coats that we hung on the street, we put a giant label with the name of the industry it represents,” the British designer explains via email faye too goodFounder of the studio with her sister.

From this project came the idea for Toogood’s first clothing collection, known until then for its furniture and interior design projects. The atelier’s collection consisted of eight coats representing eight professions such as milkman, beekeeper, street sweeper or oil rig worker. “At Toogood, we value utility and functionality. That is why we are inspired by workwear.”

Ten years later, Toogood has found a common element with the brand in the values ​​that workwear embodies. carharttFounded in Detroit in the late 19th century to dress the city’s workers (and now part of every city dweller’s uniform). Cold worth its salt). The studio and the American company have just started Toogood x Carhartt WIP, a capsule collection of garments made from recycled cotton. The different designs bring together iconic silhouettes of both brands, such as Carhartt’s Michigan jacket and Toogood’s Photographer, which are characterized by the two huge pockets that the jacket has on the front: “They are used to store any type of clothing kits of accessories,” explains the Englishwoman. The creative process that led to the collection was one of the attractions of the last edition of the Salone del Mobile in Milan, where Toogood once again played with the size of the garments to help the show audience appreciate the details of their designs. “I made three of the garments in the collection 5 meters long and placed them on three giant cardboard and wire dolls,” explains the designer. “By enlarging the pieces and dressing our dolls in them, the shapes and craftsmanship of our work are seen in a very different way. The buttons looked like plates!”

Faye Toogood takes inspiration from uniforms to create her clothes, but as a designer, she adheres very little to the standard. With a degree in art history from the University of Bristol, the Briton began her professional career as director of interiors for the decoration magazine The world of the interior, an institution where he worked for eight years. Then he wanted to jump from the pages of the publication to the homes of his readers. “I started in the magazine world because I was interested in reinvention and change, and that’s what allowed me to do this job: I had to create a new concept for an interior every month,” says Toogood. “However, I realized that the areas I designed were just for the page, so nobody really experienced them. As soon as I left the magazine, I devoted myself to interior design and started designing spaces, especially for fashion stores. Then I discovered that the furniture I needed didn’t exist. That’s how I started creating my own furniture.”

In 2014, Toogood launched the Roly-Poly chair, arguably the most emblematic piece of furniture in his studio: four thick legs supporting a rounded seat, giving it the look of a friendly creature. The piece is so iconic that it is currently part of the permanent collection of museums like this Philadelphia Art Museum or the Denver Art Museum, but Toogood did not rest on his laurels and continued to explore other fields such as fashion or art. In her exhibition at the last Salone del Mobile in Milan, the designer, together with her wire and cardboard giants, presented the new Pieces of Cobble, a collection of ceramic stools and small tables inspired by rounded stones found on the banks of rivers or Stone beaches that, as is usual in Toogood’s studio, break down the boundaries between art, design and craftsmanship or between furniture and sculpture. For Toogood, this holistic vision of design is his trademark.

“Having no career in the design world, I feel free to think things my way, without committing myself to a specific working formula,” explains the creator. “The idea of ​​not being able to design something I want to do just because it doesn’t fall within my professional field is too limiting.”

As she has admitted many times, the mix of not having a diploma that officially accredits her as a designer and her constant ebb and flow from design to art, or from the furniture to the clothing world, has left her suffering from impostor syndrome . Success after success, Faye Toogood becomes more and more convinced that she is a designer but says she would be more comfortable if she could present herself as a shoemaker. “When my sister and I were little, my mom was responsible for making everything for us, from cereal to bread to jam. The idea that you have to make and fix things yourself has always been present in my approach to my work.”