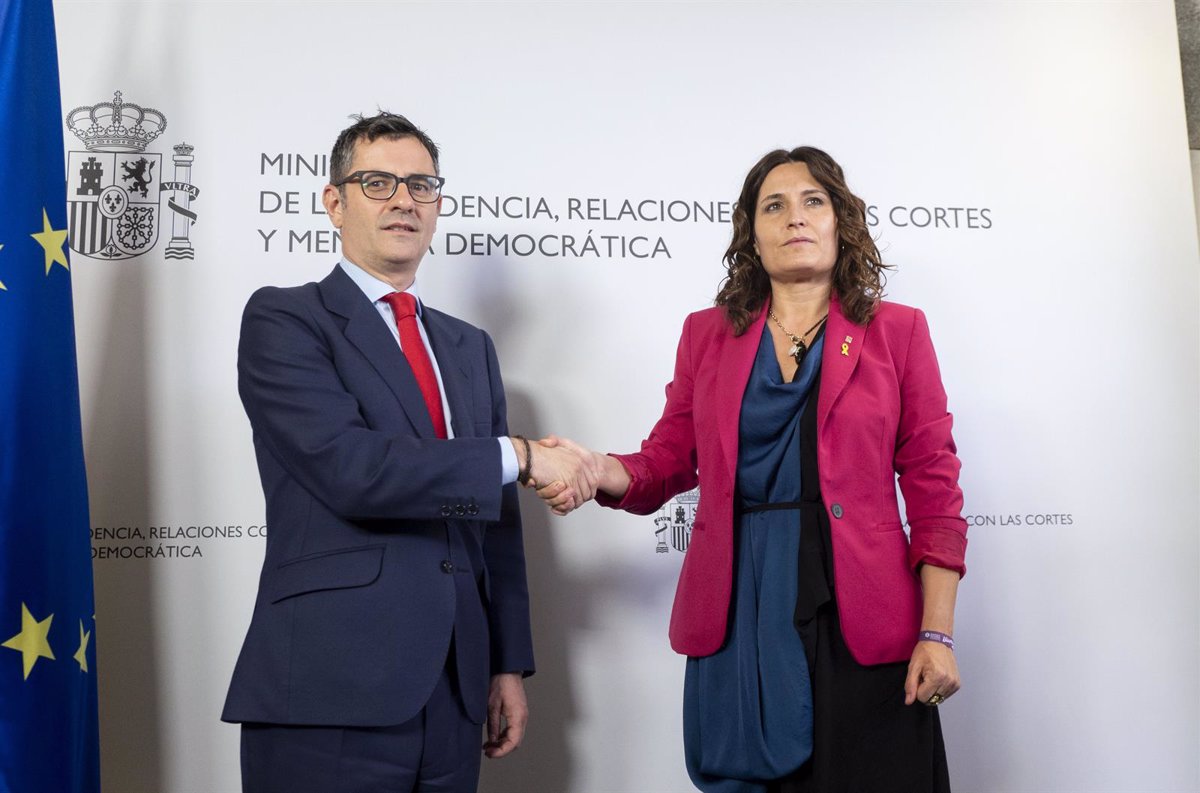 The Minister of the Presidency, Relations with the Courts and Democratic Memory, Félix Bolaños announced this Wednesday that he has reached an agreement with the Generalitat to establish a methodology for the operation of the dialogue table. He has also indicated that a meeting between the president of the executive branch, Pedro Sánchez, and that of the Catalan government, Pere Aragonès, is being sought, although the date has yet to be determined.

At a press conference in Moncloa, after a two-hour meeting with the Minister of the Presidency of the Government of the Generalitat, Laura Vilagrà, Bolaños explained that both parties have started to work on a “framework agreement” that will contain the principles and methods of the dialogue table.

Therefore, he has indicated that this agreement will be drafted in the coming weeks and will serve as a guide for the dialogue between the two administrations in the coming “months and years”.

When asked whether setting guidelines for the operation of the Round Table represented a return to the beginning, given that he had already met twice – once with Quim Torra as President of the Generalitat and the last time with Aragonès self-confirming that the methodology by which they are conducted is as important as the content of the sessions.

Regarding the next meeting between Sánchez and Aragonès, Bolaños has indicated that it will take place as soon as the agendas of both allow it, recalling that the meeting with the Prime Minister will be very intense in the coming weeks. However, Laura Vilagrá specified that she hopes that this will take place in July before the end of the political course.

On the other hand, Bolaños has also admitted that the meeting with the Catalan minister revealed the disagreements between the two governments regarding the spying of independentistas with the “Pegasus” program.

Bolaños did not specifically mention it, referring to the matter as “the information that appeared in The New Yorker” and already reported that he explained to Vilagrà all the measures taken by the government: the internal control of the CNI, the information made available to the ombudsman and “other measures” in the sense of clarifying the facts.

However, he has recognized that for his interlocutor it “wasn’t enough” and therefore there are “disagreements” between governments, although he finds the measures they are taking to be “rather vigorous”. So he pointed out that this part has remained a mutual explanation of what the positions are and where the differences remain.

THE RELATIONSHIP IS NOT NORMALIZED

The minister described the meeting as “cordial, sincere and constructive” and stated that with this meeting, political and institutional relations between the two governments “affected” by the recent information would resume. “We are returning to the horizon of dialogue that we have always defended and claimed,” he said.

However, Vilagrà has stressed that although this meeting between the two presidents has been closed, “the negotiating table has not thawed at the moment” because he considers that “there is no normalized relationship” between both executives, the Catalan and the central .

As he pointed out, the government of Catalonia is “working” to provide some guarantees that will eventually lead to the holding of this negotiating table, which has not met in Barcelona since last September.