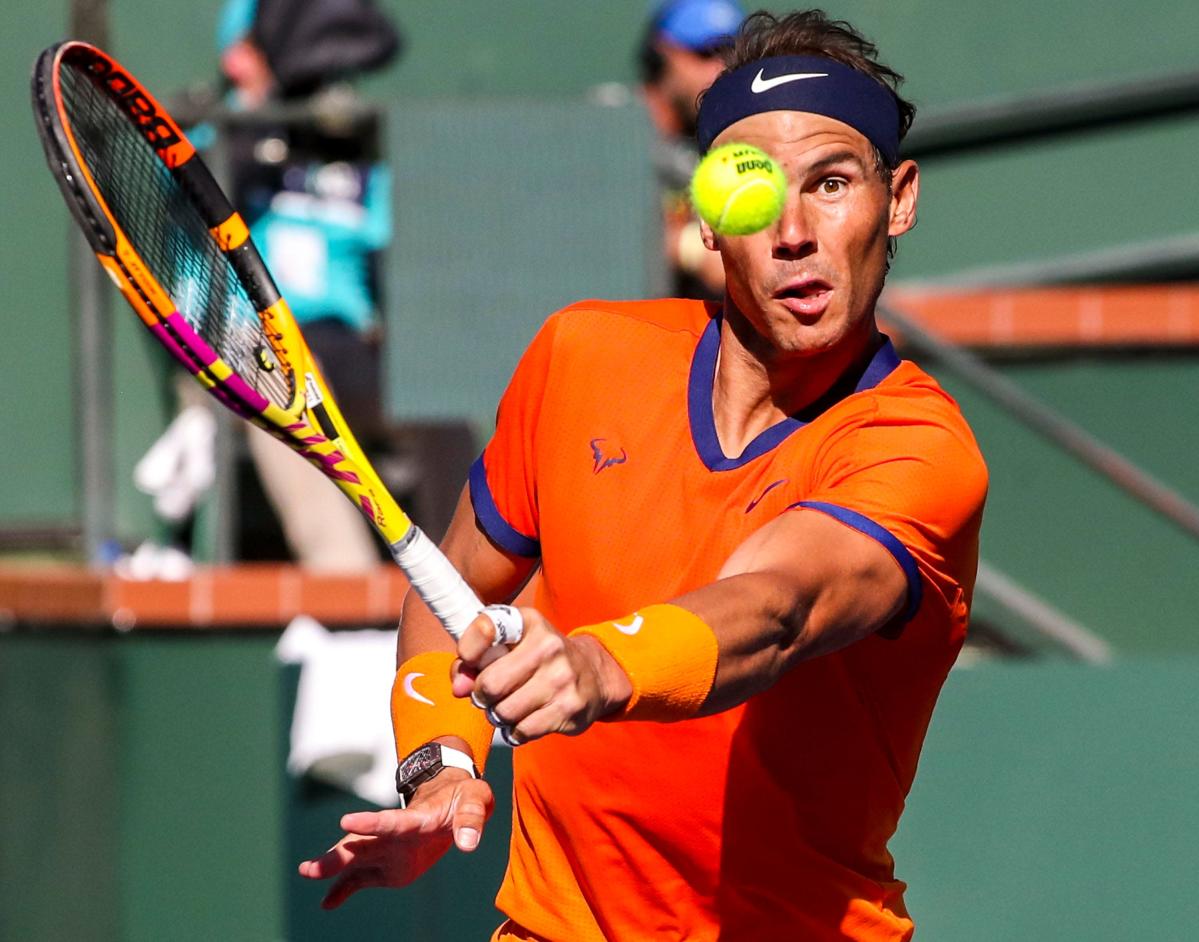 Rafael Nadal survived an early break and saved two break points in the third set on Thursday to advance to his 11th semi-final at the BNP Paribas Open.

Nadal’s 7-6(0), 5-7, 6-4 win over Nick Kyrgios on the stadium court puts the Spanish tennis star in a showdown on Saturday with the winner of Thursday’s final match between the Spaniard Carlos Alcaraz and defending champion Cam Norrie of Great Britain.

Nadal is now 19-0 in 2022, which is the best start to a season of his legendary career. Only Novak Djokovic has had a longer unbeaten streak to start a season since 1990.

However, the match came to an ugly end, as Kyrgios, who had been arguing with the referee throughout the match, asking him to better control the crowd, threw his racket to the ground and hit the back wall a few meters from a ball boy. who was crouching .

The ending spoiled what was a very entertaining match.

“It was an amazing atmosphere.”

It seemed soon that Kyrgios would be the one to break the streak. As he had throughout this tournament, Kyrgios played his best tennis early in the match. He gave Nadal a break early and seemed to thrive in the high-energy atmosphere inside the mostly packed 16,100-seat stadium.

The Australian tennis star who entered the draw as a wild card, was the lowest-ranked player to reach the Indian Wells quarter-finals since Croatian Ivo Karlovic in 2011. Kyrgios held serve early and his forehand was registered. at 109 mph, which is among the highest. this year on the World Tour.

For the first nine games, it was Kyrgios, not Nadal, who was patient and aggressive. The Aussie dictated the pace and tone of the match and made few unforced errors. He started with his serves, forcing Nadal back well past the baseline, and caught the 21-time Grand Slam champion with a few aces underhand.

Then he faced a breaking point. Kyrgios had won all nine break points he had faced in this tournament, but Nadal was determined to chase every ball and it paid off. He broke Kyrgios to get back into the match at 5-5 and served to go up 6-5.

Kyrgios slammed his racket down the court in frustration. He continued to play with the racket, but before forcing a tiebreaker in the next game, he tossed it onto the court. Chair umpire Carlos Ramos issued a warning to Kyrgios for a code violation. The next would cost him a point.

In the tie break, Nadal won the first four points before firing an ace from 120 mph to make it 5-0. He then scored again and won the set when Ramos hit Kyrgios with a code violation for audible obscenity. It was Nadal’s fourth win in four tiebreaks at this event.

In the second set, although Kyrgios stopped play to yell at a spectator to turn off his phone, the Aussie refocused and held serve throughout the second set. Meanwhile, Nadal’s unforced errors and double faults piled up to keep Kyrgios alive. Up 6-5, Kyrgios finally landed another break to take the set and let out a loud roar as the crowd cheered in the background.

Kyrgios held serve to start the third set and nearly broke in the second game. But Nadal, as he has done so many times before, saved two break points to win the game and hold serve. He punched the air in celebration.

Nadal then got ahead of Kyrgios, he was talking back and forth with actor Ben Stiller, who was sitting courtside. At Kyrgios’ urging, Ramos called on the crowd to be respectful of the players and remain silent.

Although the damage was already done. After Kyrgios held serve, Nadal won four straight points to win the match.

“And racing, racing, I kind of snagged the second and a couple of points in the third that just, a couple of break points. One of them that I couldn’t do anything on and two, I just missed a backhand for who knows. , three inches. That’s it against Rafa all the time.”

“So he’s too good, I guess. He played some points well and came away with it and that’s what he does. That’s what makes him great.”