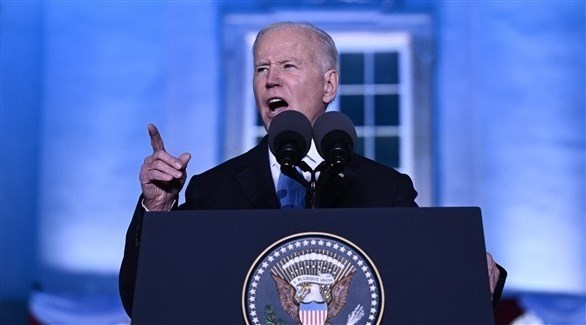 US President Joe Biden’s statement that his Russian counterpart Vladimir Putin “cannot stay in power” resonated around the world, prompting his administration to quickly clarify it and avoid confusing Washington’s efforts. to mobilize a united front in the Ukraine conflict.

Biden’s statement, which came in a speech in Warsaw at the end of a three-day European diplomatic tour, was described by a Republican senator as a “horrible slip of the tongue.”

A prominent American analyst considered that it could prolong the war.

French President Emmanuel Macron also warned that such phrases could “escalate” the conflict that the United States and its NATO allies seek to contain and undermine Western efforts to help affected Ukrainians.

The statement came at the end of a strong speech on Saturday in which Biden ended a tour of Europe aimed at closing ranks against the Russian invasion.

His offhand words, “For God’s sake, this man can’t stay in power,” surprised even his advisers by his apparent departure from US policy in handling the conflict thus far.

The White House was quick to intervene, making it clear minutes after the speech ended that Biden had not called for “regime change” in Russia.

US Secretary of State Anthony Blinken, visiting Jerusalem, joined officials who vehemently denied that Biden had called for Putin’s ouster.

What Biden meant, Blinken said, was that “Putin cannot be empowered to wage war or engage in aggression against Ukraine or anyone else.”

The US secretary added that the choice of who will be the president of Russia “is up to the Russians.”

The US administration also tasked its NATO ambassador, Julian Smith, to confirm the same message, declaring on various television networks that “the United States has no policy of regime change in Russia, period on the line.”

Smith told CNN’s “State of the Union” that Biden’s comments were an “initial human reaction to stories he heard” during a visit to Ukrainian refugees in Poland.

But the French president, who has spoken to Putin several times since the invasion began, has warned the West not to “intensify words and actions” or risk hampering vital humanitarian efforts, including hopes of evacuating those stranded. in the affected city of Mariupol.

“Nothing can lead to escalation more than a call for regime change,” Rich told CNN.

Biden has been known for decades to make many language lapses, with newspapers rushing to list his “10 biggest language lapses in history,” and Feather, a prominent Republican on the Senate Foreign Relations Committee, considered that the president had once again shot himself in the foot.

Emphasizing that Joe Biden gave a “good speech,” Jim Risch noted that he had made a “horrible lapse at the end.”

“I hope they will commit him to the text of the written letter,” he added.

But not everyone saw the statement as an unspoken threat, or even a slip.

Among them is Ukraine’s ambassador to the United States, Oksana Markarova, who told NBC’s “Meet the Press” program: “Any war criminal who attacks a neighboring country and commits all these atrocities … certainly cannot remain in power in a civilized world. .

And former US ambassador to Russia Michael McFaul said on Twitter that Biden’s words should be read a little differently.

He said: “Biden expressed what billions of people around the world believe, and millions inside Russia as well, and he did not say that the United States should remove him from power, there is a difference.”
But many pundits in the United States and abroad have harshly criticized Biden.

“Putin will see this as a confirmation of what he has always believed,” Hass tweeted.

Equally austere, François Heisbourg, a research fellow at the International Institute for Strategic Studies, argued that US leaders had better not “lose their mouths.”

- Advertisement -
Share
Facebook
Twitter
Pinterest
WhatsApp
Previous articlePeople who haven’t had covid yet probably don’t have friends, says Korean doctor
Next articleTobias Hans wants to decide on his resignation as CDU head of state on Monday