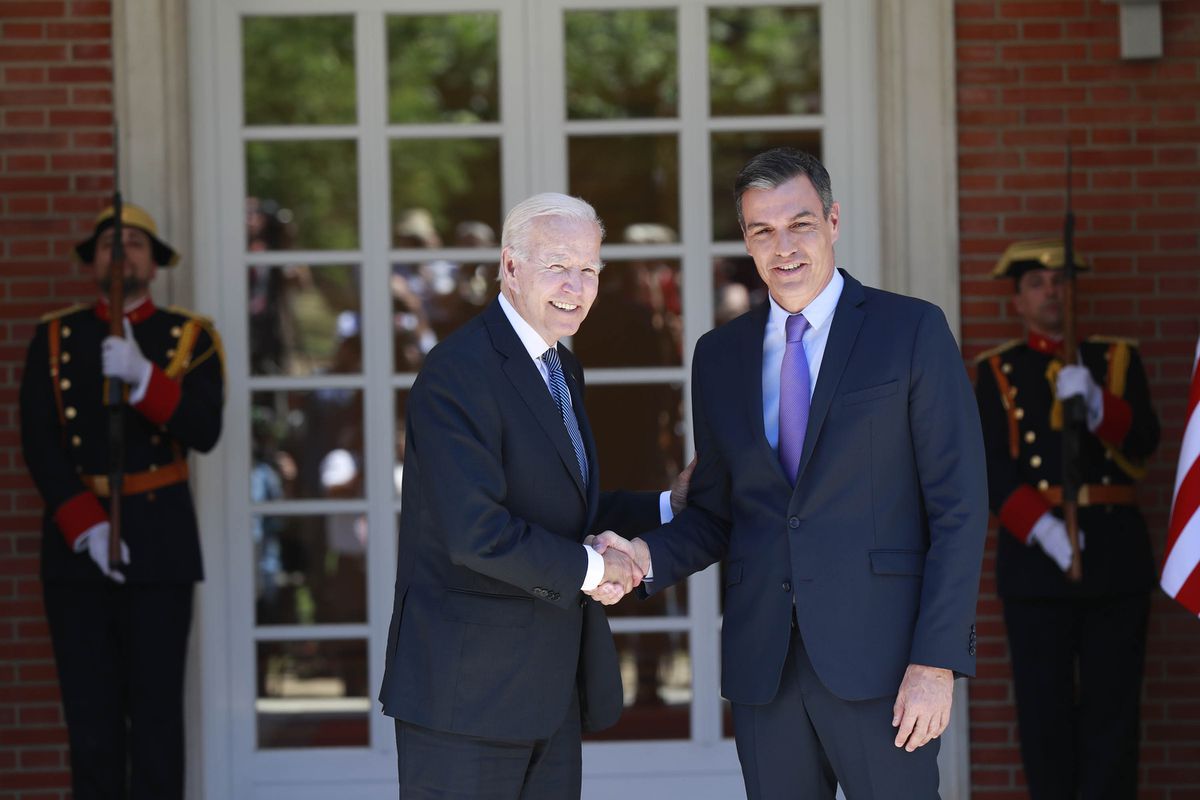 One of the central themes of the meeting between Pedro Sánchez and Joe Biden in La Moncloa, which has just begun after the welcome on the steps of the palace of both presidents, will be the expansion of the US military presence in Spain. The US President will officially notify the Spanish of the United States’ intention to increase the number of Arleigh Burke-class destroyers stationed at the naval base in Rota (Cádiz) from four to six, National Security Advisor Jake Sullivan announced. According to forecasts, the number of sailors will also increase from 1,200 to 1,800. Spain has already accepted this proposal informally and now the process will start to do so formally.

Biden landed at the Torrejón de Ardoz base around three in the afternoon, where he was met by King Felipe VI. was received. And then he went to La Moncloa, where he plans to meet with Sánchez for an hour, in the first formal meeting the two have had since Biden arrived at the White House.

Sánchez and NATO Secretary General Jens Stoltenberg met this Tuesday to open the summit that will decide the alliance’s course over the next decade, taking place through Thursday in Madrid, a city shielded by a large police apparatus becomes. “The purpose is clear,” said the Spanish President. “Deliver in the Charter of the United Nations and the Charter of Washington a message of unity of allies, unity of democracies coming together to defend freedom, democracy, political plurality and a rules-based international order [en la que se basa la OTAN]’, in a clear reference to the contrast with Russia and other totalitarian states. The event, which will be attended by more than 40 delegations from different countries, will focus on the invasion of Ukraine by Russia. Stoltenberg has stressed that he hopes “to be able to move forward with the accession of Sweden and Finland”. This afternoon, the NATO Secretary General will meet with Turkish President Recep Tayyip Erdogan and the leaders of Sweden and Finland to discuss Ankara’s veto on the two Nordic countries’ candidacy.

The holding of the NATO summit in Madrid will serve as a framework for a long-desired bilateral meeting between Biden and Sánchez by Spanish diplomacy, which, although there is no set agenda, will most likely address the situation created in Europe by the Russian invasion of Ukraine, the instability of the Sahel, which has become the epicenter of jihadist terrorism, relations with Latin America and the maintenance of some tariffs on Spanish products and sanctions imposed by the Trump administration in application of the Helms-Burton Act – which the US -Embargo against Cuba – as well as the presence of US troops in the bases of Rota (Cádiz) and Morón de la Frontera (Seville).

Biden is coming to Madrid from Bavaria, Germany, where he attended the G-7 meeting, and the meeting lasts about an hour. Biden will be joined by Secretary of State Antony Blinken, Pentagon chief Lloyd Austin and National Security Advisor Jake Sullivan. President Sánchez will be accompanied by Foreign Minister José Manuel Albares, Defense Minister Margarita Robles, Manuel de la Rocha, Secretary General for Economic Affairs, and Emma Aparici, Director of the Ministry of Foreign Affairs.

According to the head of Spanish diplomacy, the meeting will serve to advance the issues on which they are already working together. The Spanish government recently attended the Summit of the Americas in Los Angeles as an observer and pledged to work on a plan to ease pressure from Central American emigration to the United States and to increase work permits for seasonal workers from those countries in Spain.

Washington is suspicious of Madrid’s stance on regimes like those in Cuba, Venezuela or Nicaragua, but the new government has taken a more pragmatic stance, for example relaxing the embargo on Venezuelan crude oil to alleviate shortages caused by sanctions on Russia. After his conversation with Sánchez, Biden will go to the Royal Palace, where he will have an audience with the king, who, in a unique gesture of deference, plans to receive him at the Torrejón base.

Before the meeting in La Moncloa scheduled for this Tuesday, Biden and Sánchez had only fleeting talks when they met at the NATO summit in Brussels in June 2021 and at the G-20 summit in Rome last October. In addition, on the occasion of the withdrawal from Afghanistan in August last year and in the last few days, they have had several telephone conversations about the Madrid summit. Although La Moncloa made arrangements for Biden to receive Sánchez in Washington before going to Madrid, the White House claimed it was having scheduling issues. Sánchez, who had little relationship with Donald Trump, from whom an ideological abyss separated him, has been seeking a meeting with Democrat Biden since arriving at the White House. For the Spanish executive, the US President has a very similar agenda and it was only a matter of time before this meeting would take place due to the apparent political coincidences. Sánchez has always been looking for that trip to the White House that he hasn’t been able to complete so far, but this meeting could be a first step in making it happen.

In La Moncloa, chance also stands out in a crucial matter like the fight against climate change. In fact, Biden invited Sánchez to the telematics summit he organized on the subject in April 2021. It is not officially planned to talk about Morocco, but about the Sahel and the security risks posed by instability in that area, but that agrees with Sánchez’s turn towards Western Sahara, which is more in line with US positions, which closer to Rabat as an ally against it Algeria on Russia. Spain has traditionally been in an intermediate position, but the postponement has brought it closer to Morocco, and thus the US, while moving away from Algeria, which has withdrawn its ambassador and suspended its friendship treaty with Spain.

The American President’s visit was preceded by that of his wife Jill Biden, who arrived on Sunday afternoon and this Monday, accompanied by Queen Letizia, visited the headquarters of the Spanish Association against Cancer, a disease that is being fought, personally involved. Both will visit a reception center for Ukrainian refugees in Pozuelo de Alarcón (Madrid) on Tuesday before attending the gala dinner that the King and Queen will offer to the more than 40 heads of state and government present at the Royal Palace. to the NATO summit, which starts this Tuesday and ends on Thursday.