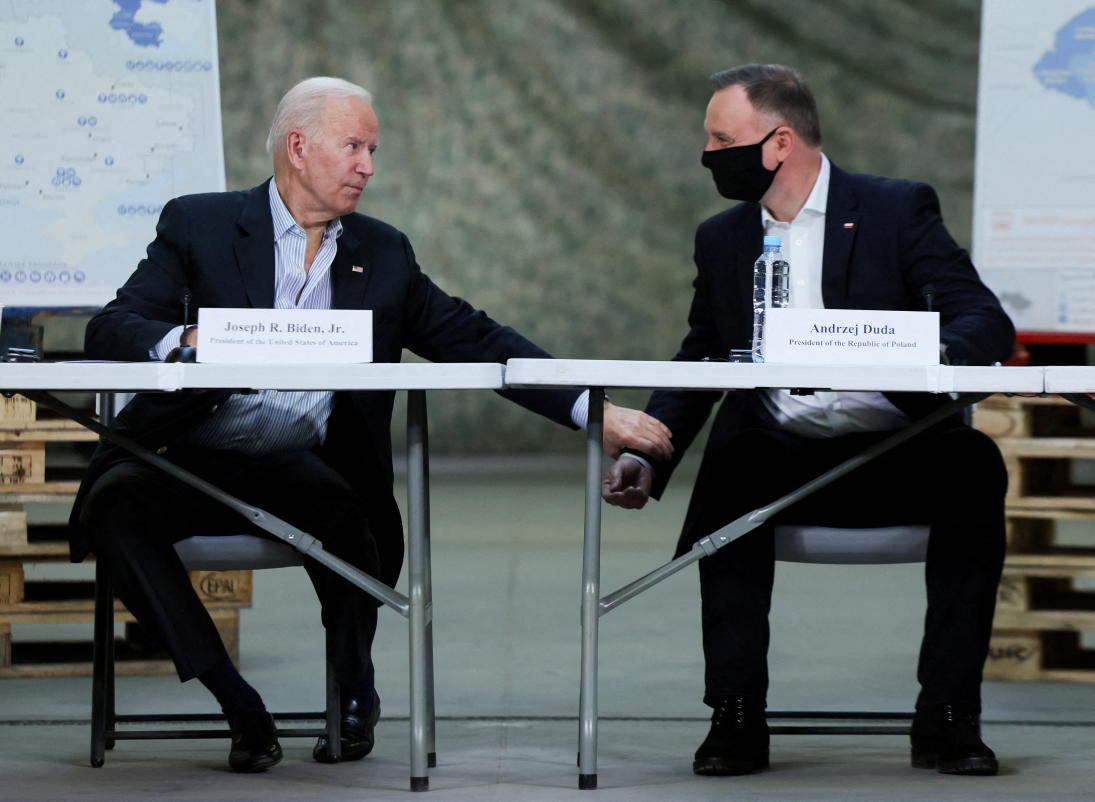 For the US president, Ukraine is the scene of global competition between democracies and autocracies. Russia’s foreign minister accused the West of instigating a “hybrid total war” with the sanctions.

Kyiv/Rzeszow – US President Joe Biden visited NATO’s eastern member Poland on the 30th day of Russia’s war of aggression against Ukraine. Just 90 kilometers from the Ukrainian border, Biden first met with US soldiers stationed in Poland in the city of Rzeszow on Friday. The US president said the conflict is about more than just helping the people of Ukraine and stopping the “massacres.” It is also about the freedom of the children and grandchildren of American soldiers. In the last ten years, more democracies have been lost in the world than have been founded. The question is whether democracies or autocracies will prevail in global competition.

In response to NATO’s deployment on the eastern flank, Russia announced that it would increase its troops on the western border. Because of the war, NATO had activated its defense plans and placed 40,000 soldiers on the eastern flank under direct alliance command. Moscow accused the West of waging war against Russia with the sanctions. “Today they declared a real hybrid war on us, a total war,” Foreign Minister Sergey Lavrov said.

With the visit to Poland, Biden wants to strengthen NATO’s eastern flank. On Friday he wanted to meet with the Polish head of state Andrzej Duda. However, his plane had to return to Warsaw due to damage. There, Duda switched to a replacement aircraft. The president of the United States wants to give a speech in Warsaw this Saturday.

Heavy fighting was also reported from Ukraine on Friday night. According to the Ukrainian general staff, some Russian units in the northeast withdrew behind the border. They had suffered heavy losses, sometimes more than half their force, he said. The war zone information could not be independently verified. However, in recent days, US and British sources have also confirmed that Ukrainian forces have launched successful counter-attacks east and northwest of the capital, kyiv. Western military powers are monitoring what is happening with satellites.

In northeastern Ukraine, however, Russian troops continued to blockade Ukraine’s second-largest city of Kharkiv and the regional center of Sumy. Russian troops are preparing for a new offensive near Izyum in the Kharkiv region, the General Staff in kyiv said.

According to Ukrainian sources, Russian forces twice fired rockets at a military unit near the city of Dnipro overnight. The barracks suffered significant damage, the regional military administration said on Facebook. Dnipro is in central Ukraine and has so far been largely spared from attacks. The Russian Defense Ministry said a Ukrainian fuel depot near kyiv had been destroyed.

For the evacuation of civilians from the port city of Mariupol, which was besieged by Russian troops, 48 ​​buses were ready on Friday in nearby Berdyansk. According to Ukrainian information, a corridor to the city of Zaporizhia was agreed with the Russian side to continue escaping.

In Brussels, US President Biden agreed with EU Commission President Ursula von der Leyen that Europe should become less dependent on energy supplies from Russia. The US and international partners want to deliver an additional 15 billion cubic meters of liquefied natural gas (LNG) to the EU this year. In the long term, Biden and von der Leyen announced that the volume should increase to 50 billion cubic meters per year. According to the Commission, this could replace around a third of Russia’s current gas imports.

At their summit in Brussels on Thursday, EU heads of state and government failed to agree on a fundamental cancellation of Russian energy supplies. The right way to deal with high energy prices was discussed for hours on Friday. A draft prepared before the summit established that the EU Commission should present concrete measures against high electricity prices, without endangering the internal market or the energy transition. A decision was still pending.

According to Economy Minister Robert Habeck (Greens), Germany is well on the way to less gas, oil and coal from Russia. “Germany is rapidly reducing its energy dependency on Russia and putting its energy supply on a broader basis,” a ministry document says. Habeck said that by late summer and fall, Germany could do without Russian coal altogether. As far as oil is concerned, he expects Russian imports to halve in the summer. In the case of gas, it might be possible to become independent of Russian supply by the summer of 2024, except for a few actions.

The EU decided to establish a Solidarity Fund to provide financial support to Ukraine. As a result of the Russian war of aggression, Ukraine is suffering huge destruction and losses, he said in a statement. The country should be helped with current expenses, but also “after the end of the Russian attack on the reconstruction of a democratic Ukraine.” Like the United States before it, the EU has officially accused Russia of committing war crimes in Ukraine.

By Friday, 253,157 war refugees from Ukraine had entered the German borders. This was announced by the Federal Ministry of the Interior. The actual number is likely to be higher because many Ukrainians do not need a visa and are not checked everywhere. According to the UN refugee agency, more than 3.7 million people have fled Ukraine since the war began.