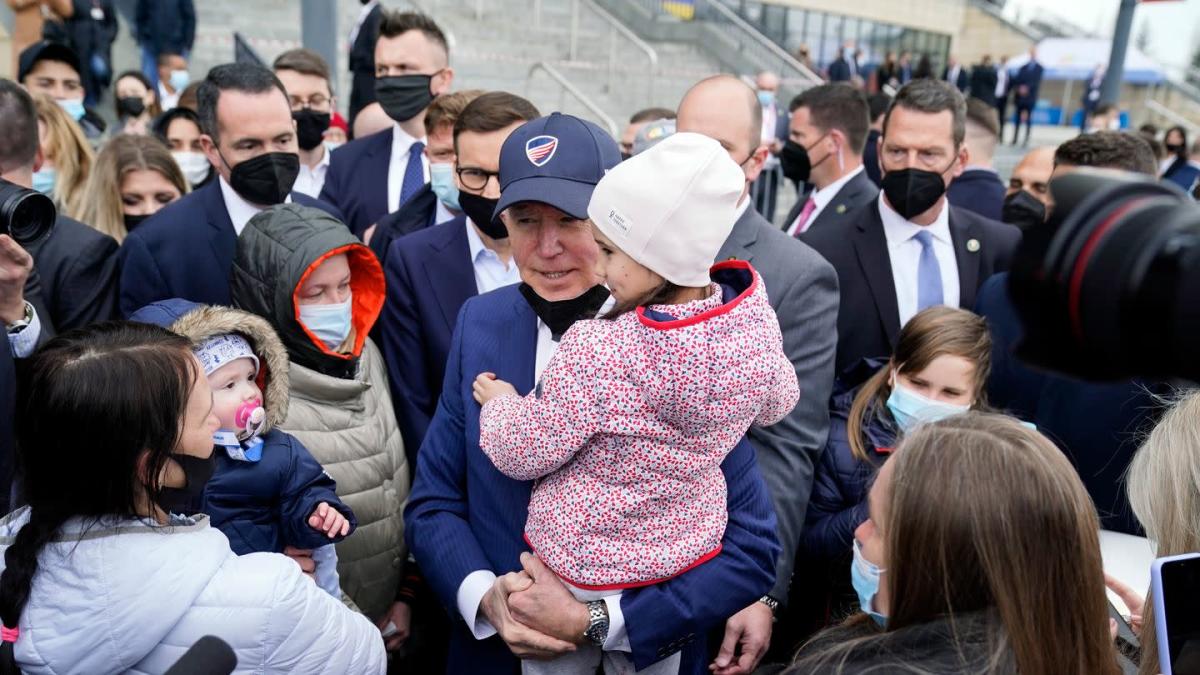 Warsaw (AP) – United States President Joe Biden has made a firm commitment to protecting Europe’s NATO partners in the face of Russia’s war against Ukraine.

“We consider Article 5 a sacred obligation and you can count on it,” Biden said in a meeting with Poland’s President Andrzej Duda in Warsaw on Saturday. It assumes that Russian President Vladimir Putin “hoped to be able to split NATO, to be able to separate the east flank from the west,” Biden said. But he was not able to do that.

Biden also thanked Poland for taking in refugees from Ukraine. “We recognize that Poland is shouldering a huge responsibility which, in my opinion, should not concern only Poland. It should be the responsibility of the whole world, of all of NATO,” the US president said. “We understand the fact that so many Ukrainians seek refuge in Poland because we have thousands of people on our southern border who … are trying to get to the United States every day.”

Doubtful: Poland wants to work closely with the US on nuclear power

According to Duda, it will work closely with the United States on its planned entry into nuclear power. “I think that together with American companies, but under the strong auspices of the White House, we can implement this program in the near future because Poland urgently needs it,” Duda said after his meeting with Biden. Poland needs US nuclear power plants to implement climate protection and secure a modern energy supply.

Until now, Poland has no nuclear power plants. However, the PiS conservative national government relies on nuclear power to phase out coal. The two favorite places are near the Baltic Sea, a good 70 kilometers from Gdansk. According to the strategy document “Polish Energy Policy until 2040”, the construction of the first reactor block should start no later than 2026 and should be online in 2033. Five more reactor blocks will follow by 2043.

Before his meeting with Duda, Biden held talks with Ukrainian Foreign Minister Dmytro Kuleba and Defense Minister Oleksiy Reznikov. They met with their American counterparts in Warsaw: Biden attended the meeting for about 40 minutes. It is the second day of Biden’s trip to Poland. On Friday, Biden traveled to Rzeszow, in southeastern Poland, and visited US troops stationed there. The city is only about 90 kilometers from the border with Ukraine. In Rzeszow, together with President Duda, he too learned about the work of aid organizations dealing with refugees.

In an appointment at the National Stadium in Warsaw, Biden described Putin as a “butcher”. At the meeting with the Ukrainian refugees, Biden was asked by a reporter what he thought of Putin in light of the refugees’ fate. “He’s a butcher,” Biden said then. The English word “butcher” can also be translated with the German word “Metzger”. Biden had previously described Putin as a “war criminal.”

Biden had an impression of the refugee relief effort. The videos showed Biden speaking with the refugees. For example, she held a child longer in her arms and put her hands on a woman’s shoulders to comfort him. Biden said she spoke with several children who asked her to pray for their parents, grandparents or siblings who were fighting in Ukraine. He met “wonderful people” here, Biden said. Among them were two refugees from the city of Mariupol in southeastern Ukraine.

Almost 2.27 million people from Ukraine have entered Poland so far. There is currently no official information on how many of them stayed in Poland and how many have already traveled to other EU countries.

Biden visited the stadium on the second day of his visit to Poland to get a feel for the refugee relief efforts and to speak with Ukrainians himself.

Biden then wanted to give a speech in Warsaw about the war in Ukraine. The White House attaches great importance to Biden’s planned speech for the evening. National Security Adviser Jake Sullivan announced that the US President wanted to “discuss the importance of this moment.” Biden wanted to make it clear once again why it is so important that the West shows determination towards Russia in the face of the war in Ukraine. Russia must be “responsible for its brutal war”. Biden then wanted to travel back to the United States.