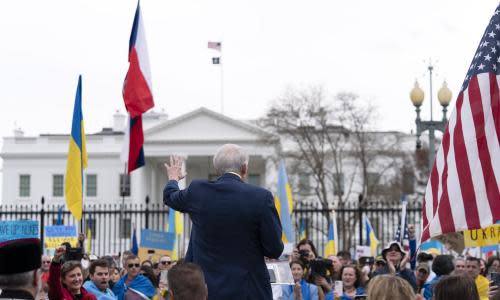 A senior Republican senator on Sunday urged the United States and NATO to “close the skies” over Ukraine, hours after Russian forces attacked a logistics center and training base for foreign fighters 11 miles from the Polish border. killing 35.

“The message coming out loud and clear is to close the skies,” said Rob Portman, a senator from Ohio on a visit to Poland. “Because the skies are where the bombs come from, whether it’s missile strikes or aircraft strikes or artillery strikes.”

The US intelligence community has assessed that any attempt to create a no-fly zone would risk escalation. The United States also rejected a Polish offer to supply aircraft to Ukraine through a US air base in Germany.

Asked if supplying Ukraine with Russian-made MiG-29s could trigger a third world war, Portman told CNN’s State of the Union that he “didn’t know why that would be true.”

“The Russians have complained about everything,” he said. “Vladimir Putin has said that sanctions are an act of war.”

Russia, Portman said, “complained when we provided Stingers directly from the US government, that they can bring down an aircraft and have had success doing so at lower altitudes. We have given [Ukraine] helicopters

“… What we have heard directly from the Ukrainians is that they want [the jets] seriously. They want the ability to have better control over the skies to give them a fighting chance. So I don’t understand why we’re not doing it.”

Sullivan repeated Joe Biden’s opposition to “offensive” arms transfers while underscoring a commitment to supplying “defensive” weapons, telling CBS’s Face the Nation that the US and its allies “believe in our ability to to continue sending substantial amounts of military assistance, weapons, and supplies to the front lines in Ukraine.

“We have been successful in doing so so far and we believe we have a system in place that will allow us to continue to do so, despite Russian threats.”

Russia claimed that the attack on the Yavoriv base was against foreign fighters and weapons. Pentagon spokesman John Kirby told ABC’s This Week that there were no Americans at the facility.

But Kirby reiterated that the US and its allies “would continue to flow and move and reposition forces and capabilities along NATO’s eastern flank to make sure we can defend every inch of NATO territory if needed.

“We have made it very clear to Russia that NATO territory will be defended not only by the United States, but by our allies.”

On calls to supply planes or announce a no-fly zone, Kirby said: “We can all understand the kind of staggered measure that could be perceived.”

US Deputy Secretary of State Wendy Sherman said Russia showed signs of “readiness to have real and serious negotiations” even though four sets of talks failed.

Sherman told Fox News on Sunday that the United States had been working to “put huge pressure on Vladimir Putin to try to change his calculus, end this war, get a ceasefire in the first place, get humanitarian corridors and end this invasion. .

“That pressure is beginning to have some effect,” Sherman said, though he added: “It appears that Vladimir Putin intends to destroy Ukraine.”

On Saturday, the White House approved an additional $200 million in military assistance.

“We are determined and the Ukrainians are determined to ensure that anti-tank, anti-armour, anti-aircraft capabilities, ammunition and other forms of assistance actually reach the front lines to slow the Russian advance,” Sullivan told NBC’s Meet the show. Press. “We are coordinating the efforts of our allies and partners to do the same.”

Last week, Biden warned of a “severe price tag” if Russia used chemical or biological weapons. Sullivan said Russian claims about alleged Ukrainian bioweapons labs indicated Moscow may be preparing to do so.

“When Russia starts accusing other countries of potentially doing something, it’s a good sign that they may be about to do it themselves,” he said.

“What we are here to do is deny them the ability to have a false flag operation to blame the Ukrainians or us, take away their pretext and make the world understand that if chemical weapons are used in Ukraine, it is the Russians who will have them. used. And the response will be, as the president said, severe.”

Sullivan wants to meet China’s top diplomat, Yang Jiechi, in Rome next week. Sullivan said the United States would respond to any attempt to circumvent Western sanctions against Russia.

“We have made it clear not only to Beijing but to every country in the world that if they think they can basically bail out Russia, they can give Russia a solution to the sanctions that we have imposed, they should expect something else because we will make sure that neither China nor can anyone else compensate Russia for these losses,” Sullivan told NBC.

He declined to outline what steps the United States might take, saying: “We will communicate this privately to China, as we have already done and will continue to do.”

Later, in response to reports that Moscow had asked Beijing for military equipment, the Chinese embassy in the US said that China’s top priority was to prevent the situation in Ukraine from spiraling out of control.

The economic fallout from the war in Ukraine has yet to register strongly in American polls. On CNN, Portman laid out a Republican line of attack, blaming Biden for not expanding oil drilling in the country. Biden has countered that US oil companies have not exploited existing permits.

A CBS poll found that 77% of Americans across the political spectrum are willing to pay more for gasoline as a result of sanctions to punish Russia. According to the survey, 69% said that economic pain now could be a wise protection against bigger problems in the future.

Americans largely believe that Russia has plans to invade other countries.