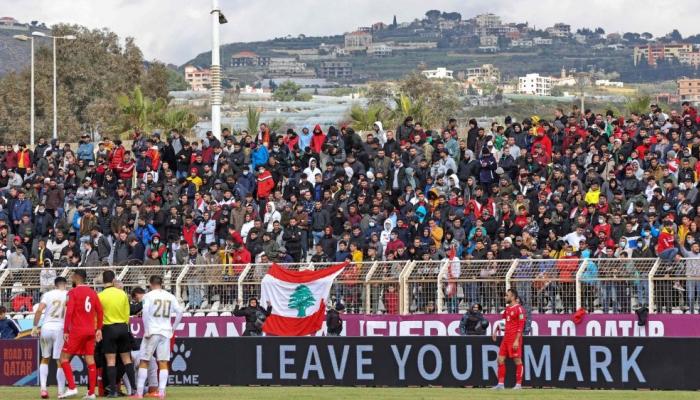 The game between Lebanon and Syria on the penultimate day of the Asian qualifiers for the 2022 World Cup witnessed unfortunate events after being stopped on more than one occasion.

Referee Abdul Rahman Al-Jassem refused to complete the match in the 70th minute and asked all fans to leave the stadium, following the riots.

The referee ordered the players to leave the Sidon stadium due to the uproar of the fans, while Syria advanced 3-0.

The commentator for the Abu Dhabi Sports Channel, which broadcast the match, said that the reason why the referee called it off in the 70th minute is what happened from the Lebanese fans to the Syrian team players, who threw water bottles. .

After the match was stopped for more than 20 minutes, the referee returned to complete it after the Lebanese and Syrian fans left the Saida Stadium.

The second part of the match was delayed by a quarter of an hour due to consultations between the referee and the match observer, in protest over organizational issues.

The Lebanese team played its worst game in the qualifiers, and eliminated the defeat of Syria, before any possibility of playing the extra card, which was resolved between the Emirates and Iraq.

The Syrian team achieved its first victory in the qualifiers and reached the fifth point equally with Lebanon and Iraq, but the latter played one game less.

South Korea and Iran qualified for the World Cup directly from this group, while the Emirates match will be a “9-point” match against “5-point” Iraq, later on Thursday, decisive in determining the identity of the qualifier for the complement before two days at the end of the qualifiers.