Because Berlin Can’t Do It: How a Children’s Charity and Management Consultancy Organize Lessons for Ukrainian Children 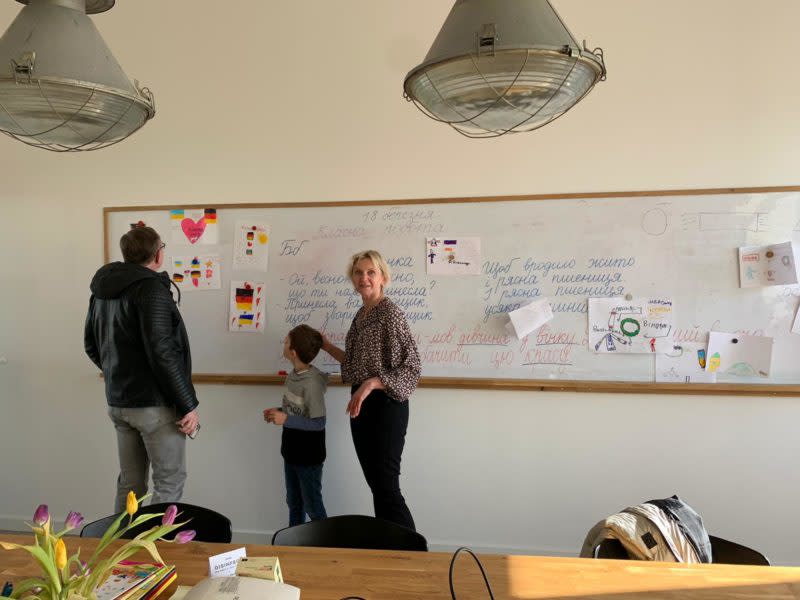 On the fourth floor of a factory building in Berlin’s Wedding district, children walk through the door. A brown-haired girl runs to a blackboard and writes: “I love Ukraine.” Others hold their mothers’ hands tightly, as if they never want to let go. Ukrainian primary school children have had classes here for four days and are now sitting in the classroom with other children for the first time since they fled the war in Ukraine. However, not in a so-called welcome class at a Berlin school, but privately organized.

“Berlin is taking too long to quickly integrate Ukrainian children into school,” explains Faina Karlitski, a management consultant with the Boston Consulting Group (BCG), whose colleagues took some of these mothers in private. “So the children are left alone at home with their mothers. Some of them are traumatized and without the opportunity to distract themselves from the war in their home country,” says Karlitski. Together with the Christian child and youth welfare organization Arche, she organized provisional lessons for all those who still do not have a place in school until the summer. The project is called: “Classroom for Ukraine”.

However, so far it is not clear whether all Ukrainian children will have a place in school for the summer: the Berlin Senate wants to establish around 102 welcome classes in primary schools alone, in which children will gradually learn German. and will be prepared for regular school operations. But the city already has to find additional rooms for homecoming classes. At the same time, the number of Ukrainian children arriving in Berlin is growing. Many of their mothers are mentally exhausted after the escape.

“More and more mothers with children who have no place in school or daycare are stranded in our facilities.”

Arche founder Bernd Siggelkow also experiences a great need for care options and psychological support on a daily basis: “In our center, more and more mothers with children who have no place in school or daycare and who lack relationships with other people get trapped.” he says Staying in Germany, for sure, is not enough for them. Therefore, Siggelkow demands: “If we allow people to enter our country, then we also have a responsibility to accompany them.” Therefore, when teaching at Kiez Wedding in Berlin, the focus is not on education, but on the structure that refugees get from it.

In fact, for mothers and children, the lessons often mean taking a deep breath from the war: “Before, I had to take care of my children alone 24 hours a day. The constant fear for my husband nearly crushed me.” and my son Myroslaw,” says youth worker Maria, 30, who also has a three-year-old daughter. And her husband in Vinnytsia, just 200 kilometers from the hotly contested kyiv, organized aid transports at the risk of her life. “For the first time in a month in Germany, the lessons are taking me and my seven-year-old son away from the war and worrying about my father,” she says. Therefore, a place in kindergarten and school is all she wants for her children.

Many Ukrainian mothers are like Maria. It is mainly women who flee Ukraine. Men between the ages of 18 and 60 cannot leave Ukraine, but must defend the country. Including many parents.

Ukrainian primary school teacher Tatyana Gubskaja, 56, had to leave her husband in Ukraine. Through a Telegram group, management consultant BCG was able to spontaneously win her over to teach refugee children. The teacher herself was still standing in front of her second class on February 22 in the Ukrainian capital of kyiv. A few days later, Gubskaya fled to Berlin with her daughter and her seven-year-old grandson with her second daughter. Her grandson Sergej now also attends Wedding classes.

“I am very happy to be able to do this important work,” he says. For now, he wants to talk as little as possible about the war, she says, as tears well up in his own eyes. Because for her it is also the time when she is not afraid of her husband in Ukraine. Primary school teacher Gubskaja is supported by her colleague Natalja Khalit, 33, who was caught up in the war in Ukraine with her husband while she was on vacation in Egypt. “We couldn’t fly back to Ukraine, and therefore we traveled directly to Berlin,” Khalit says in an interview.

Both teachers now alternately teach the first to second and third to fourth classes from 10 am to 1 pm First in their own language. Later, the students will learn German as in the state welcome classes. Teachers also use Ukrainian textbooks, which the country has made available online, to help with this. Because so far there is only one Ukrainian textbook in the classroom, which a refugee boy brought from Ukraine in her backpack. In addition, the Arche has already provided school bags and pencil cases for the children.

But impromptu transition lessons cannot be a long-term solution, Arche boss Bernd Siggelkow believes. More than 50 Ukrainian children have already signed up for the lessons, and the waiting lists are getting longer by the day: “We could fill ten classes,” says Siggelkow. The Berlin school system is simply not prepared for this number of refugee children. According to Siggelkow, he currently assumes that there are 12,000 children among the approximately 28,000 Ukrainian refugees in Berlin.

Berlin’s education senator Astrid Sabine Busse (SPD) announced just a few days ago that almost 150 welcome classes in secondary schools must now be added to the 102 welcome classes in primary schools. But when asked by Business Insider, a spokesperson for the Berlin Education Senate also admitted: “The capacity of schools remains a general challenge in a city that has recently grown rapidly.” And the shortage of educators across the country also poses problems for Berlin.

In addition to the lack of school places and educators, Siggelkow also considers another problem to be crucial: “Schools not only need teachers who speak the language of Ukrainian children, but also who can deal psychologically with children’s war experiences.” , it says. Arche founder, “This will be the ultimate test.” Because most of the teachers just wanted to finish their material. But what children need are people of reference.