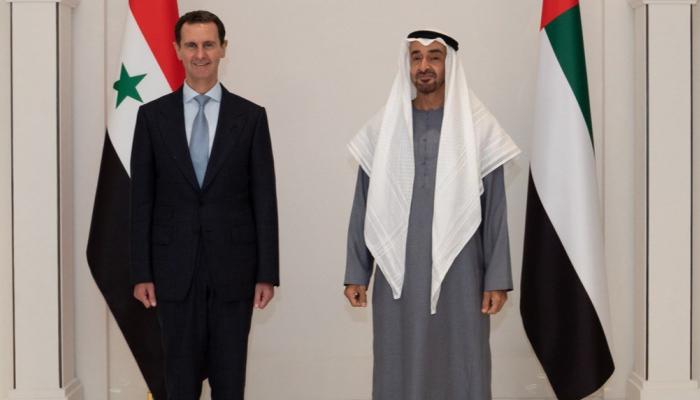 The UAE welcomed Syrian President Bashar al-Assad, who visited the country, at a very significant international moment and in a very special regional context.

It was not surprising to analysts that the United Arab Emirates was the first Arab station for President Bashar al-Assad, whose efforts the country’s leaders taught him confidence in this country’s enthusiasm for Syrian interests, on the one hand, and the Arab unity and the strengthening of solidarity. in the other one.

The UAE, while occupying its seat on the UN Security Council, is seen in regional circles as a destination expected to play a major role in resolving outstanding issues, including the Syrian crisis, as the UAE believes that the international and regional context requires the need for peace to prevail in the region and in the world.

In his reading of the implications of the Syrian president’s visit, Lebanese political scientist Nidal Al-Saba said, in tweets on Twitter, that President Al-Assad’s visit to the UAE is a “breaking of the Western veto and a challenge to all international countries”. taboos,” adding: “The time the Gulf was waiting for is over. International signals, and Abu Dhabi today determines the direction of the wind and outlines alliances and the next stage.”

He added: “Days and experiences have shown that Sheikh Mohammed bin Zayed’s decision is independent, and is moving according to Emirati, Gulf and Arab interests.” He continued: “The US administration is concerned about receiving President Bashar al-Assad in Abu Dhabi. Taking Al-Houthi off terrorist lists?” says the Lebanese analyst.

As for the Egyptian political analyst, Bashir Abdel-Fattah, an expert at the Al-Ahram Center for Political and Strategic Studies, described the Syrian president’s visit as “important in its connotations and at the time.”

As an extension of the international dimension regarding the Syrian president’s visit to the UAE, Abdel Fattah said in an exclusive interview with Al-Ain News: The context and timing of Al-Assad’s visit reflect the enthusiasm of the countries Arabs to meet the challenge of the aftermath of the Russo-Ukrainian war and their attempt to structure Arab policies in accordance with these challenges, changes and in the interest of the Arab countries.

He added: “There is an understanding that neglecting and isolating Syria has primarily served Iran’s interests, and non-Arab parties have been able to benefit from this isolation and use it for their own benefit.”

The Egyptian political expert added that luring and returning Syria to the Arab incubator again could help miss the opportunity for these regional and international parties to exploit Syria as a thorn in the side of Arab countries.

As for the regional dimension of the visit, Bahraini political analyst Amjad Taha, regional head of the British Center for Middle East Studies, said that Abu Dhabi, in all courage and realism, is perpetuating the Arab role in Syria; Reduce tensions to find solutions to the crises in the region, from within the region, not from outside.

He also saw that what he described as “the disappointment and annoyance of the United States” for the visit confirms its success, as a hope for the region, he said.

In the same context, the Emirati political analyst and academic, Abdul Khaliq Abdullah, linked the US “discomfort” over Bashar al-Assad’s visit to the Emirates with the “failure” of former US President Barack Obama.

Abdul-Khaleq Abdullah said: “No one is compromising the moral standing of the UAE in support of the Syrian people, and no one, including Washington, has anything to do with its sovereign decisions stemming from its national interests and duties.”

On Friday, the US State Department expressed “deep disappointment and alarm” over the Syrian president’s visit to the United Arab Emirates.

Commenting on this, Kuwaiti academic Badr Al-Seif points out that, at the same time, Washington called on its allies in the region to take more responsibility for its security affairs, explaining that “the UAE is participating in exactly that, which it means that there will be no permanent agreement with the United States, since each country pursues its own interests.

However, Al-Saif told “AFP” that “relations between the UAE and the US will not be negatively affected by this visit.” He added that “the UAE pushed for Syria to return to the Arab League…Bashar al-Assad in this context.”

Al-Assad’s visit, which coincides with the anniversary of the outbreak of the Syrian crisis in mid-March 2011, comes with an implicit message at this point that Syria is beginning to find steps to resolve that crisis, and that Assad is well aware that visiting the United Arab Emirates will be a milestone on the way to resolving that crisis and his return to his country for his seat in the Arab League.