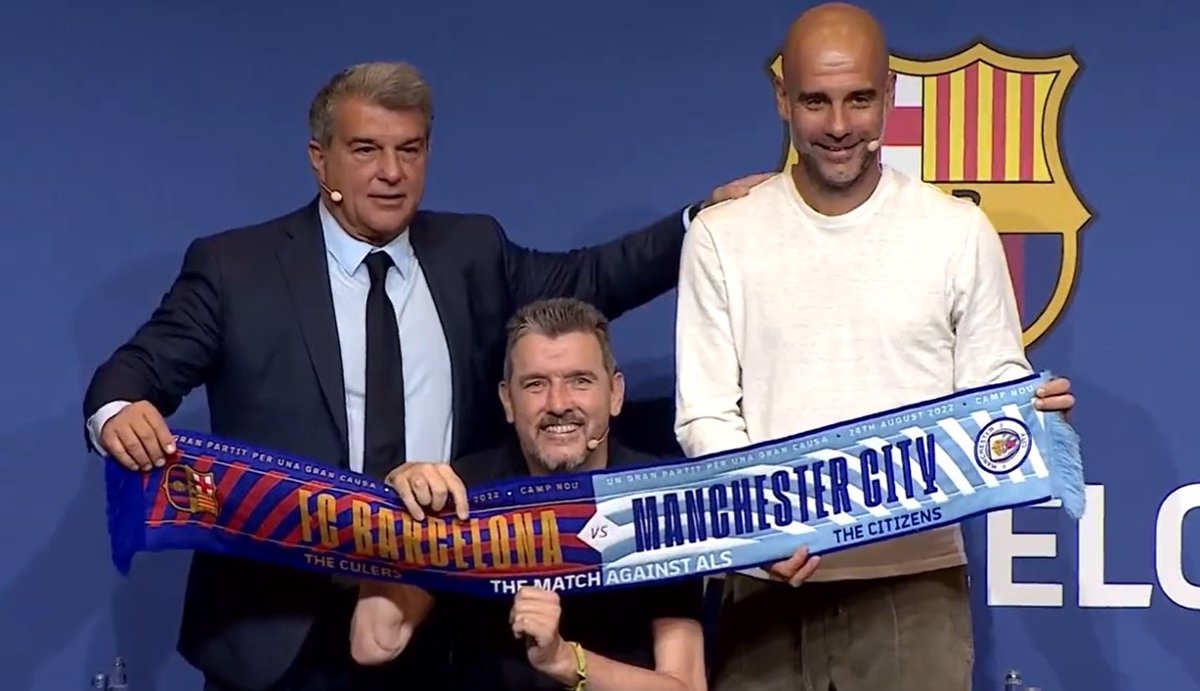 FC Barcelona President Joan Laporta; Manchester City manager Pep Guardiola; and former player and coach Juan Carlos Unzué presented this Monday the friendly that the Catalans and the English will play on August 24 at the Camp Nou (21:00 CET) to raise awareness and funds against Amyotrophic Lateral Sclerosis (ALS). sharpen illness of the Barça exporter, promoter of the initiative.

“Thanks to the media, we have had the time and space to report on the disease. We report what the consequences are and what the harsh reality of my teammates looks like. In this way, we have the opportunity to raise awareness to more people,” explained Unzué, who was diagnosed with ALS in 2020, at the event at the Auditori 1899 of the culé venue.

Tickets can be purchased from this Monday through the club’s website at prices that will range from 19 to 99 euros for regular and VIP seats respectively. On the same website, line 0 can also be used to make donations to the Luzón Foundation, recipient of the party’s grants.

“I hope that together we can put enough pressure on politicians to change and give us the chance to lead a decent life,” said the former goalkeeper. “There have been movements and we are no longer invisible, this has been demonstrated with this adopted bill,” he said.

Despite this, the Navarrese understands that “they are not” “the only problem in this country”, but he asked for political help. “We ask you to get down to work and make it effective. There was already a no-law proposal in 2018 and nothing has been revealed about it over time; I’m a little afraid that the same will happen it stays in nothing. I ask that the commitment that Manchester City and Barça have, they have too. ELA takes three colleagues every day, that doesn’t stop. We want those affected to have a more dignified life,” he said.

Also shown during this Monday’s event was a video with the song “Ara”, an anthem symbolizing this fight against ALS, specially created by producer Jordi Cubino and performed by Miki Núñez, who will sing it live on August 24th becomes.

The anthem revealed during the performance, which came as a surprise to Unzué, will also go to charity and all profits collected for the rights to reproduce the song will go to the Fundación Catalana de ELA Miquel Valls, dedicated to improving the quality of life of those people affected by ALS and fighting to get this disease treated.

FC Barcelona have also designed a commemorative scarf for the game, which will also have a charitable purpose as 100% of the profits from sales will go to the Luzón Foundation. The scarf costs 25 euros and can be purchased from the beginning of August in the six official Barça stores (Camp Nou, Paseo de Gracia, Canaletes, Airport T1 and T2 and La Roca Village) and online via the e-Club Commerce.

The Luzon Foundation will be the beneficiary of the game. Francisco Luzón was diagnosed with ALS in 2014 and established the foundation with the aim of helping those affected by the disease. María José Arregui, his widow, is the Executive President of the Foundation, an independent, non-profit organization that works with associations of patients, researchers and patients to raise funds for research and the quality of life of people with ALS and their families to improve social and health workers.

- Advertisement -
Share
Facebook
Twitter
Pinterest
WhatsApp
Previous articleCornwall’s Camilla poses and speaks on her 75th birthday: ‘I’ve been tested for so long I had to learn to live with it’
Next articleHonda hits bottom without Marc Márquez and faces its worst crisis in 40 years