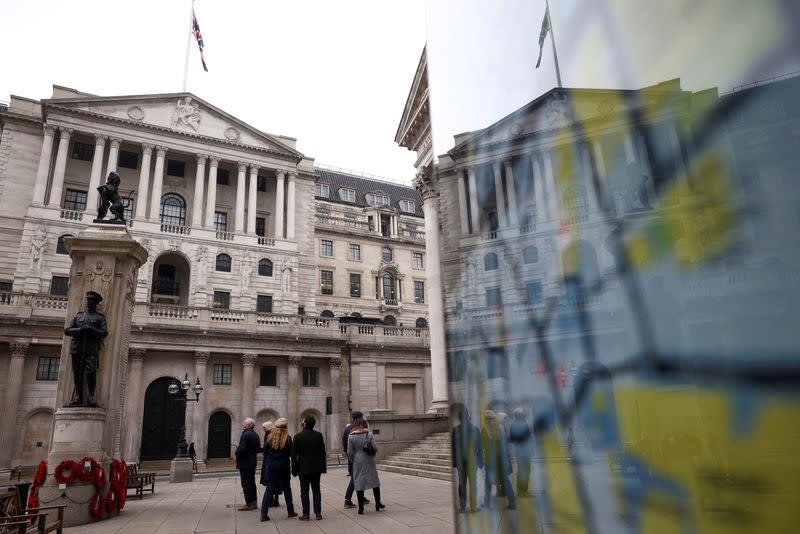 By David Milliken and Huw Jones

LONDON (Reuters) – The Bank of England said on Thursday it may not go ahead with plans announced in December to raise banks’ capital requirements in the next quarter, given the Russian invasion of Ukraine.

The BoE said the capital and liquidity position of major UK lenders remained strong, but economic uncertainty meant it might not be appropriate to raise cyclical capital requirements that are linked to the economic recovery.

“Global financial markets, particularly for commodities, have been volatile and uncertainty about the economic outlook has increased significantly,” the BoE said in a quarterly report from its Financial Policy Committee.

Margin calls on commodity derivatives had risen to an all-time high but served as a “critical safeguard” for financial stability, the BoE said.

The BoE had said in December that it intended to increase banks’ countercyclical capital buffer (CCyB), its main tool for smoothing lending over the course of the credit cycle, from 1% to 2% in the second quarter of 2022. , with full effect a year later.

While domestic risks have not changed since then, the global environment has, the BoE said.

“Given this uncertainty, the Committee will continue to monitor the situation closely and is ready to vary the UK CCyB rate in any direction,” the FPC said.

UK banks’ direct exposures to Russia amount to 1% of their core capital at the end of 2021, the FPC said.

Deciding on the CCyB rate would be easier once the BoE’s Monetary Policy Committee (MPC) releases new economic forecasts in May, the FPC added.

The BoE also said it would delay an annual stress test of the financial health of banks, which has been suspended during the COVID-19 pandemic, until later in 2022.

Policymakers saw little risk to financial stability from a sharp rise in house prices and expected borrowers to continue to be able to pay mortgages despite a sharp increase in the cost of living.

However, the poorest households are likely to have the most difficulties.