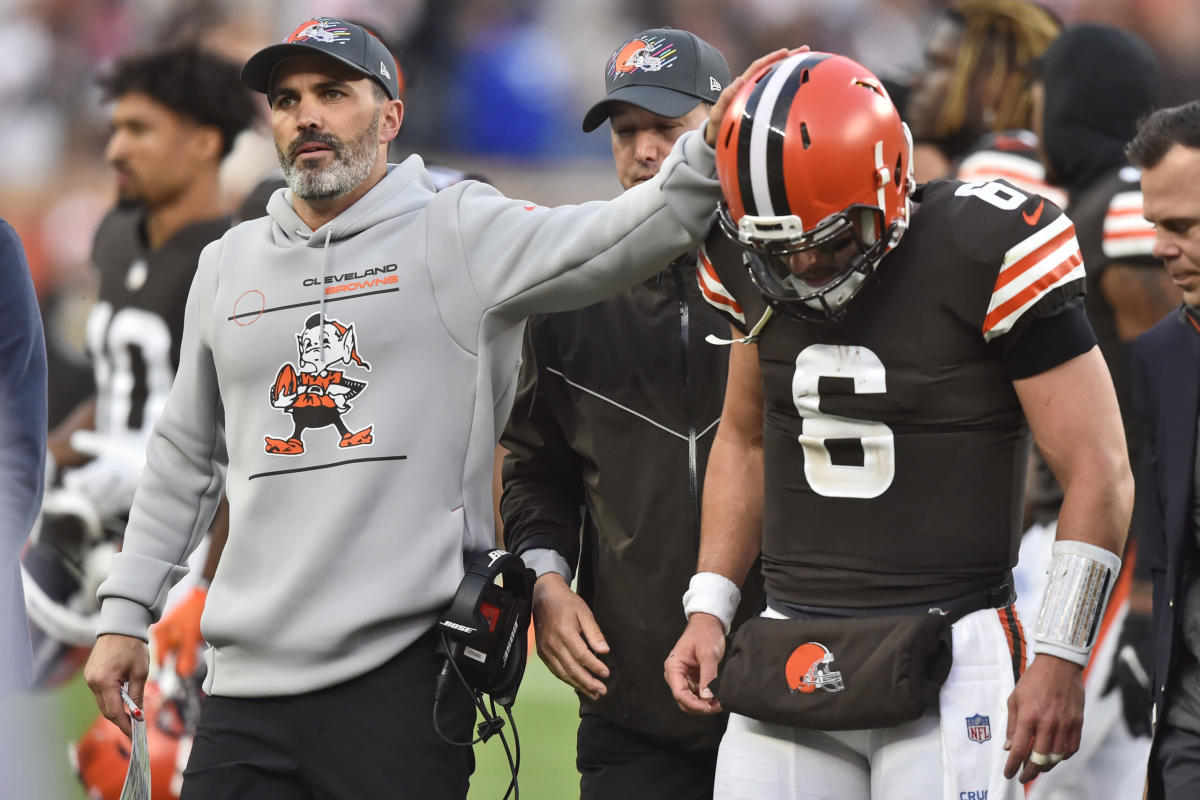 The Cleveland Browns have inserted themselves firmly into the Deshaun Watson draft, having met with the current Texans quarterback this week as part of a dog0and-pony show that includes several other prospective suitors. So it’s clear the Browns are at least weighing the possibility of giving up multiple first-round picks for Watson, should Watson waive his no-trade clause to make that happen.

There’s a bit of a problem in the equation: The Browns already have a franchise quarterback in the person of Baker Reagan Mayfield, the first overall pick in the 2018 draft and Cleveland’s quarterback ever since.

Uncomfortable? According to a statement Mayfield released Tuesday, it appears so.

“The last 4 years have been nothing short of life changing since I heard my name drafted to go to Cleveland,” Mayfield wrote. “This is not a message with a hidden meaning. This is strictly to thank the city of Cleveland for embracing me and my family. We have created many memories and have shared growing in this process through all the ups and downs. I have no idea what happens next, what is the meaning behind the silence I have had for the duration of this process. I can only control what I can, which is to trust God’s plan throughout this process.

“I have given this franchise everything I have. That is something I have always done at all stages and at all levels. And that won’t change wherever I take my next snap. Whatever happens… I just want to say thank you to the fans who really embraced who I am and the mindset that aligned so well with the hard working people of this city. Cleveland will always be a part of Emily and my story. And we will always be grateful for the impact it has had and will have on our lives.

This doesn’t sound like a “maybe we can work this out” message, it sounds like a farewell message to the Cleveland fanbase as it can be without saying it outright.

If the Browns can get Watson out of Houston, perhaps with Mayfield as part of the spoils in return? Well, that’s a positive on the field, though Watson’s obvious off-field issues are nowhere near resolved, and the NFL may well respond with a suspension of some sort.

If the Browns can’t close this deal, it’s obvious they’ve distanced themselves from their most important player, and given the public nature of the message, one wonders how much Mayfield knew about his team’s interest in Deshaun Watson before he became news.

Mayfield currently has one season left with the Browns — he’s in the fifth-year option year of his rookie deal, which gives him $18.858 million guaranteed in the 2022 league year.

Watson is approaching the third year of the contract extension he signed in 2020, and his maximum cap for 2022 will be $40.4 million. He will have a $20 million salary and a $17 million roster bonus that will be guaranteed when he starts the new league year on Tuesday.

After accepting wide receiver Amari Cooper’s $40 million salary cap in a recent trade, the Browns have just under $17 million to work with.

Mayfield may not be the best quarterback in the NFL, but given the way his team handled this, you can understand his dismay. Just as Aaron Rodgers was gone for a while when the Packers moved up in the 2020 draft to select Jordan Love in the first round, when you tell your quarterback that his time with your team is limited, you can’t expect it to be all in, the same way it could have been before.

Cleveland.com’s Mary Kay Cabot recently reported that even if Watson’s idea doesn’t work out for the Browns, Mayfield could still be traded because of the awkwardness inherent in “welcoming” him.

Bottom line, the Browns had better wait to close the deal with Deshaun Watson. If they don’t, there is going to be some serious pushback (and pushback) from the franchise.