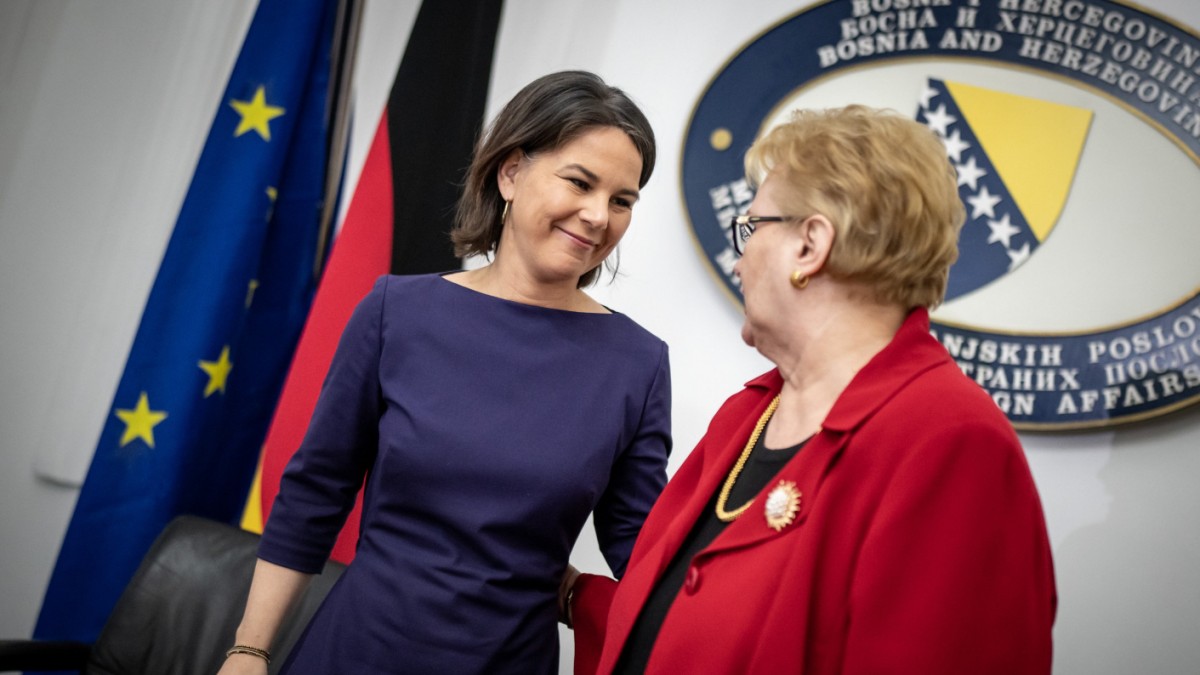 What does Sarajevo have to do with Kiev, what connects Russian President Vladimir Putin’s war of aggression against Ukraine with the situation in Bosnia-Herzegovina? During her visit to the Bosnian capital on Thursday morning, Federal Foreign Minister Annalena Baerbock asked herself the question: “Why travel to the Balkans when war is raging in Ukraine?” And she also gives the answer: “That’s exactly why I’m going to the Balkans right now.” Bisera Turkovic, her Bosnian colleague, says: “All citizens of this country know very well what war and aggression entail.”

The escalation in Ukraine and the consequences it caused in Europe “only further complicated the situation in Bosnia-Herzegovina,” he explains. The secessionist activities and decisions of the parliament of the Bosnian Serb Republic undermined state institutions and endangered the Dayton Agreement, which ended the war in Bosnia in 1995. Therefore, it is necessary to immediately stop all “secessionist processes” in Bosnia.

Turković alludes to the efforts of Serbian leader Milorad Dodik, who wants to separate the judiciary of the republic from the institutions of the Bosnian state, as well as the army, the police, the secret service and the tax administration. He expressed his “deep conviction” that the aggression against Ukraine “is part of a larger scenario that we have been observing here in Bosnia-Herzegovina for a long time” and that it is aimed at destabilizing the country – a little disguised criticism of the support for the Kremlin for Dodik.

Baerbock derives from the suffering of people in the Yugoslav wars the obligation that “these worst crimes against humanity, crimes against children, youth, the elderly, families in Europe will never happen again” – Mariupol or Kyiv are the scenarios today, Sarajevo and Srebrenica then. She reports on a classmate who came to her class at the time, and talks about people who had to experience their fathers and brothers being shot and their sisters and mothers being raped.

There are also happy moments when Baerbock strolls through Sarajevo’s Old Town with Mayor Benjamina Karić, visiting the Serbian Orthodox Cathedral, the Muslim Mosque, the Jewish Synagogue and the Catholic Church. The capital of Bosnia is once again a symbol of reconciliation and peaceful coexistence.

But the memory hurts. When she is shown a house from which snipers killed passers-by. O Baerbock visits the photo exhibition documenting the Srebrenica genocide. 8,000 dead. She speaks to the representatives of the mourners, the “mothers of Srebrenica”. Europe’s worst war crime since World War II “also had a strong influence on her generation in Germany, socially and politically,” she said earlier.

In relation to the EU and the countries of the Western Balkans, this means for Baerbock: “Peace and freedom are the only way”. He speaks of a wake-up call to the EU and the fact that Germany has not done enough in the past either. “The Western Balkans are the weak point of the EU and the place where the strength and role of the foreign policy of the strongest bloc of states in the world must be shown”, agrees its host Turković, combining this with the claim of Brussels , Bosnia the state of an EU award to candidate countries and set a date for negotiations. That would be a “strong contribution to peace and stability in the region.”

Turković stressed the importance of the UN High Representative for the country and its “legitimate powers”, which are intended precisely for situations where “the constitutional order is threatened by a party in a part of Bosnia-Herzegovina”. The German Christian Schmidt holds the position, and after speaking with him, Baerbock points out that it is Russia that wants to abolish this position, it is endowed with great power. Schmidt could remove Dodik from his post as part of the three-person state presidency that Baerbock is also meeting with: the Serbian leader is also there.

However, the Chancellor wants to send a positive message. “This country belongs to Europe,” she says. That is why we must work together intensively and more quickly on the prospects of accession. They want to work with all parts of the country, she says. But “without peace and freedom, without democracy and the rule of law and respect for international treaties, there can be no economic development.”

One must and will “stop those who are endangering peace here in Bosnia and Herzegovina for selfish reasons” and will not allow the security situation to deteriorate. A message for Dodik and his followers. “But we can’t hold an entire country, millions of people, hostage by decisions of individual politicians,” he says. He describes the balancing act that the federal government will have to manage in dealing with Bosnia.