Baerbock in Kosovo and Serbia – Politics 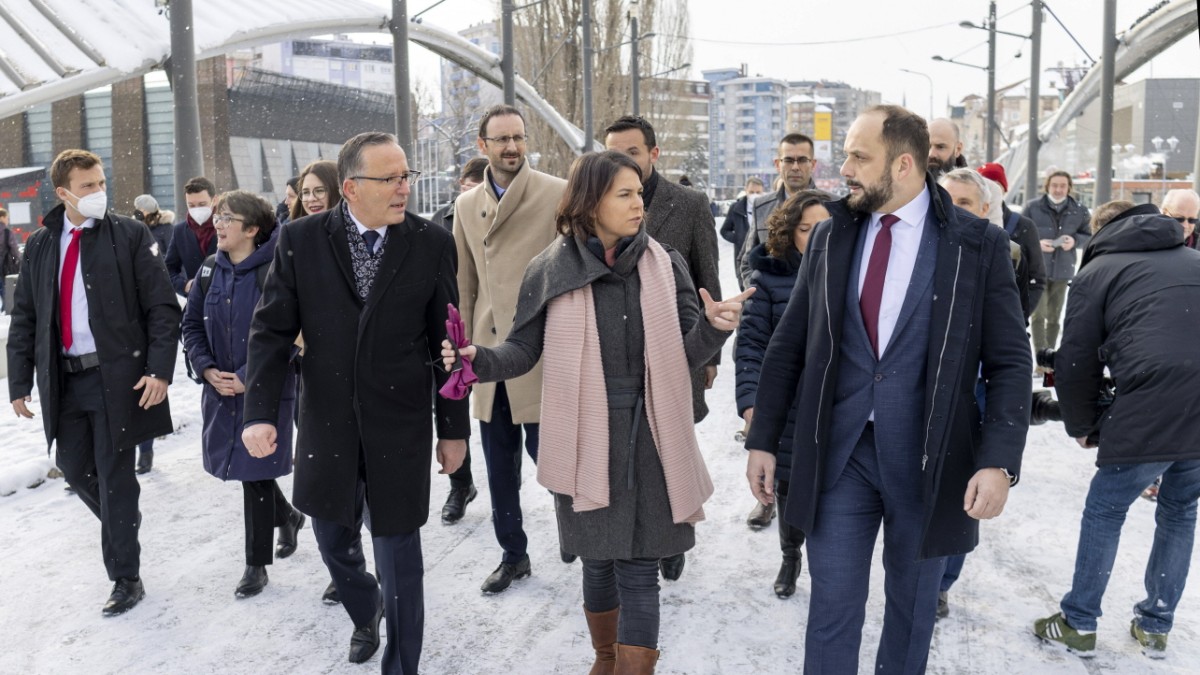 The Ibar river divides Mitrovica in half, not only geographically. In the northern part of the city of Kosovo almost exclusively Serbian-speaking residents live, in the south – Kosovo Albanians. The Ibar bridge, renovated with EU money, where Annalena Baerbock will meet this Friday with the mayors of the two administratively separate communities, is both a connection and a symbol of the ongoing division. After the end of the war in 1999, there were repeated violent clashes here. It has been quiet in recent years. But red flags hang in the streets with Albania’s black double-headed eagle on one edge and Serbia’s tricolor flag on the other. The access road to the north is blocked with red and white concrete blocks; only pedestrians can pass here.

The federal government wants to quickly bring Kosovo and the other Western Balkan states closer to the European Union. But here, on this bridge, the German Foreign Minister sees an example of how difficult it can be. She suggests a joint youth festival on the bridge in conversation with two young women from two parts of the city who are committed to reconciliation, one from the north and one from the south. They look at each other briefly, then at Baerbock and say, “Maybe we should start small.” Even the meeting of the two mayors is not a matter of course. Maybe you could explain together that it’s okay for kids from both counties to hang out together.

The night before, during his talks with Prime Minister Albin Kurti in Pristina, Baerbock stressed that the new federal government attaches strategic importance to the Western Balkans, even more so since Russian President Vladimir Putin attacked Ukraine. The Kremlin persistently refuses to recognize Kosovo, it has influence in Serbia. And, so goes fear, also the possibility of fueling existing tensions between ethnic groups.

Kurti talks about Russia’s “hybrid war” in the Balkans, from a secret service base in Niš, Serbia. Putin, whom he describes as a “warlord”, used to “not even mention Kosovo once a month, now he mentions us once a week”. The nervousness is great, clearly perceptible, everywhere in the Balkans. EU support “has never been more urgent than now,” Kurti underlines. “The EU is our goal, Europe is our continent.” NATO also feels connected to your country.

Baerbock emphasizes practical bilateral cooperation, economic relations, which he wants to further strengthen, Germany is the most important trading partner anyway. An example is the Selac wind farm, a cooperation between Kosovar and German companies and Israeli investors. Under a flurry of snow at minus ten degrees, Baerbock and Kurti open the project with 27 turbines, which will supply ten percent of Kosovo’s electricity in the future. But even Baerbock can’t promise quick EU membership, it won’t drop out of nowhere.

It certifies Kurti’s reforms and successes in fighting corruption and strengthening the rule of law, but at the same time points out the criteria that must be met, for Kosovo and the other Balkan states, but also for Ukraine and other new candidates. But there are small steps to announce, at least. Baerbock calls driver’s license recognition, “even if you smile at it.” And he promises to travel visa-free to the EU, which would be a much bigger relief; 500,000 Kosovars live in Germany alone. “Kosovo has complied, now the European Union has to comply too,” says Baerbock. France has blocked this so far, but that could change after the presidential elections there, so it is expected.

However, the biggest problem on the road to the EU remains the lack of progress in the normalization dialogue between Kosovo and Serbia. “Probing questions that exist in every family,” says Baerbock, and that nothing should be forgotten or left out. “But it also takes pragmatism and courage to make decisions that give the younger generation a chance,” he says. And he stresses that the EU’s special envoy, Miroslav Lajčák, enjoys full support. “There are steps that we, even as friends, can’t do for them,” he says.

She also conveys this message in Belgrade, where President Aleksandar Vučić will receive her on Friday afternoon. “Visible progress” is needed in the dialogue and normalization of relations between Serbia and Kosovo. After the presidential and parliamentary elections in Serbia on April 3, Germany wants to help the governments of the two countries to take the “backward steps” towards a comprehensive and binding agreement. It also calls on Serbia to oppose secessionist efforts by Bosnian Serb leader Milorad Dodik.

Above all, however, Baerbock makes it clear that the EU is a community of values ​​and that only those who share these values ​​and support the common foreign policy can become members. In view of Russian President Putin’s war of aggression against Ukraine, “clear words and actions are needed,” he says. Although Serbia supported the UN General Assembly resolution condemning the attack, unlike Kosovo it did not follow EU sanctions. In the past, Vučić has maintained a good relationship with Putin, whom many see in Serbia as a better ally than the European Union, which is, however, by far the most important economic partner.

But anyone who shares European values ​​”cannot stay on the sidelines now,” exclaims Baerbock at the presidential palace. “While we were choosing the path of construction together, President Putin unleashed an unprecedented campaign of destruction.” plexiglass in a red pantsuit for almost five minutes and criticizes the attacks: “In our neighborhood, houses, maternity hospitals and schools are being bombed” It is a message addressed not only to Vučić, but also to the Serb population. In particular, the Belgrade tabloids, many of which are devoted to and depend on Vučić, are spreading the Kremlin’s war propaganda without filters.

Vučić clarifies that Serbia opposes the war and supports the territorial integrity of Ukraine. He has had no contact with Putin since the Russian invasion began on February 24. The only problem here is compliance with international law. Serbia has not done anything that could harm Ukraine and is acting responsibly. “What do we have to do with the conflict?” he asks himself. “What did Serbia do wrong?” He explained his position on sanctions against Russia to Baerbock. The Foreign Minister did not want to report on the conversation. However, it should have become even clearer.