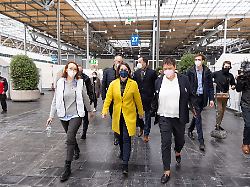 The Foreign Minister meets with refugees from Ukraine in Hannover. After talking to many children and mothers, she is deeply depressed. At the same time, Annalena Baerbock is impressed by the help on the ground and appeals to her colleagues in Europe.

Hanover (dpa / lni) – Federal Foreign Minister Annalena Baerbock appeared deeply depressed after a meeting with Ukrainian refugees in Hanover and appealed to all EU countries for help. The terrible suffering caused by the incredible war that the Russian president had caused to millions of people was evident in the few square meters, the green politician said on Sunday. In an exhibition hall, Baerbock had previously spoken with refugees from Ukraine for an hour.

He then thanked the enormous willingness to help that characterizes the company today. “We need this cohesion even more in the coming weeks to give the many children, youth, adults and seniors the protection they need together.” The visit to the emergency shelter with just under 1,000 refugees showed impressively what the situation means for the municipalities.

“You can feel when you walk into the room that this is an absolutely exceptional situation,” Baerbock said. Although there are so many children there, there was no noise at all, but rather silence, the minister described. This shows what war can do to children very quickly.

Hanover Mayor Belit Onay (Greens) said the city was prepared for the arrival of many more refugees, many with long-term prospects. “We are counting on the federal and state governments to support us with integration offers,” Onay said.

According to the city, two exhibition halls have been prepared for accommodation in the former Expo site. Tent towns have sprung up, also offering those seeking shelter a degree of privacy. One of the rooms is currently almost completely occupied with around 1000 people. Foreign Minister Baerbock praised the fact that the privacy and needs of children had been taken into account from the beginning.

With the Red Cross, the state capital wants to guarantee care and comprehensive care. Hundreds of apartments will be rented and some 350 hotel rooms will remain vacant. Baerbock demanded that federal, state and local governments now have to work even more closely on childcare, schools and jobs.

The minister also emphasized: “But at Europe’s external borders, the pressure is much, much greater.” In view of the many refugees from Ukraine, solidarity is now needed across Europe. “Many, many more people will come. We will have to distribute from the European external border,” said the green politician in the afternoon in Hannover. He announced that he would emphasize this call at the EU foreign ministers’ meeting in Brussels on Monday. “All the countries in Europe have to take in people.”