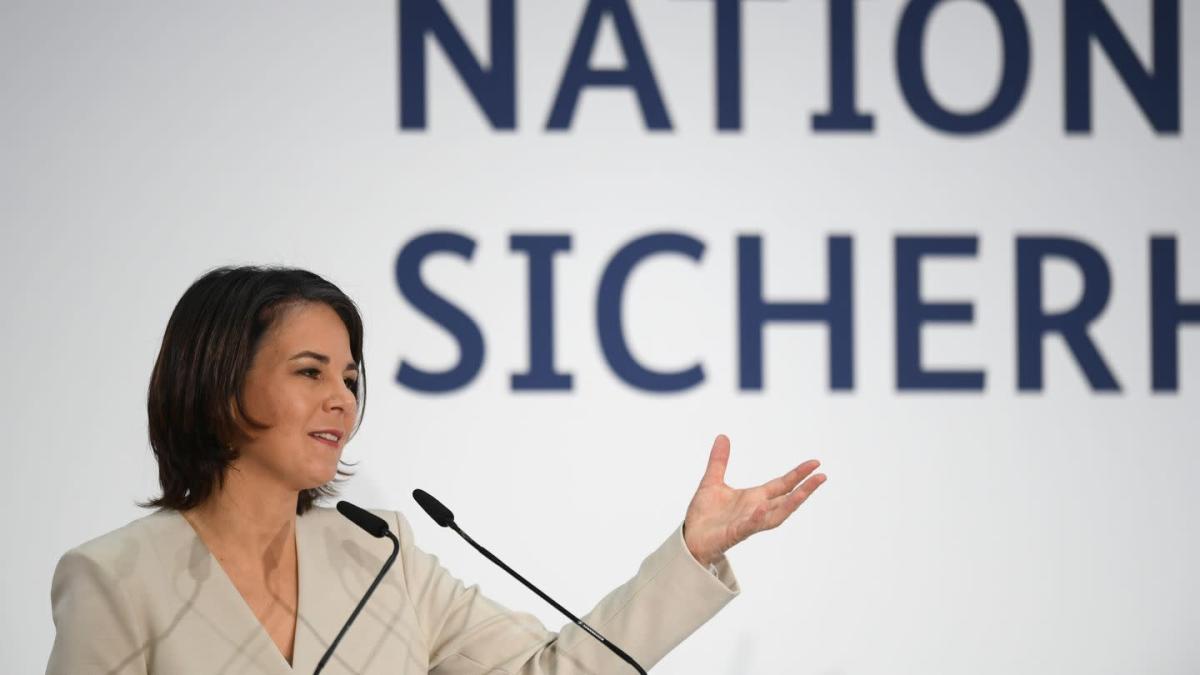 Berlin (dpa) – Faced with the Russian war in Ukraine, Foreign Minister Annalena Baerbock has underlined Germany’s will to intensify its international commitment to peace and security.

Russia’s aggressive approach is clear: “No country, not even Germany, can be neutral on questions of war and peace, on questions of justice and injustice,” the Greens politician said on Friday at the start of work on a new national security strategy for Germany. This is particularly true in view of German history.

German guilt for war and genocide means an obligation to “support those whose lives, freedom and rights are threatened,” Baerbock said. The war waged by Russian President Vladimir Putin, which violates international law, confronts us with a new reality in terms of security policy. You may feel “a longing that we probably haven’t felt in a long time, and maybe my generation has never really felt: a longing for security,” the 41-year-old said.

To strengthen NATO’s eastern flank, Baerbock said: “The previous trap logic, signaling through minimal presences in the Baltic states and Poland that an attack on one NATO country is an attack on all, will no longer suffice. in its present form.” The last reinforcements would have to be designed for the long term and the military exercises would have to reflect the new realities. The entire eastern alliance area is subject to a new threat.

In view of Putin’s threats with nuclear weapons, NATO’s nuclear deterrence must remain credible, Baerbock demanded. The goal remains a world free of nuclear weapons. However, an honest discussion about the prerequisites for disarmament should be held with partners. “This is not possible with unilateral demands on our Western allies.” There will only be real disarmament “if credible steps are taken by all nuclear-armed states.”

Strengthen the defensive attitude and the ability to form alliances.

The decisive factor for Germany’s ability to act is the ability to defend itself in the alliance, Baerbock said. This means both the ability and the will to defend oneself. For a long time, defensive was a word you didn’t just put in your mouth, the former Greens leader said. But she is convinced: “Our defense decides our security.”

Own strategy towards China

Looking ahead to China and its “New Silk Road” initiative with trade and infrastructure initiatives in Africa, Asia and Europe, Baerbock said investments in infrastructure are also relevant to security. You can only act independently if you are not completely dependent on others. In view of China’s investments in energy supply in the Indo-Pacific region, questions of sovereignty and territorial integrity have also arisen there. The federal government is also working on a new strategy for China.

Germany must become more independent of energy supplies, but at the same time “must not fall into a new dependence on other countries,” the minister said. The climate crisis is exacerbating crises between countries in the African Sahel region, for example with food insecurity and migration. That is why climate foreign policy is an integral part of the new security strategy.

Strengthening of the European defense industry

The former leader of the Greens called for the European defense industry to be strengthened and made more effective. The EU has six times more weapons systems in use than the United States. “We have to overcome this fragmentation,” Baerbock said.

The biggest challenge is the threat of cyber attacks as a central component of modern warfare, Baerbock said. “What used to be an attack on a gas line with a bomb or a rocket is now an attack on hospitals.”

The process of a new security strategy

The new security strategy will be developed under the leadership of the Federal Foreign Office together with other ministries, the Bundestag and national and international partners and will be linked to corresponding efforts at EU and NATO level. The stoplight coalition agreement states: “In the first year of the new federal government, we will present a comprehensive national security strategy.”