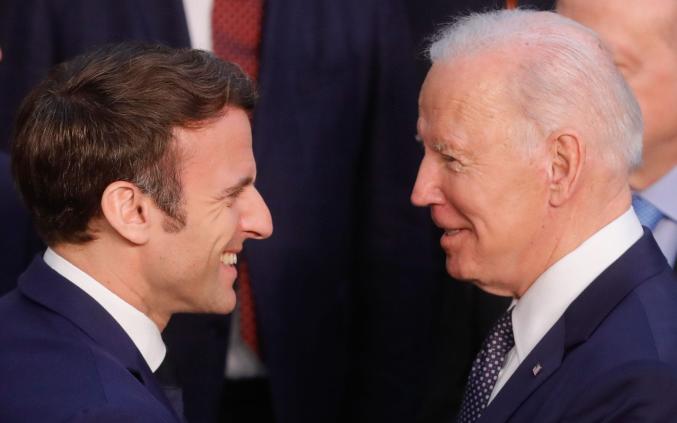 Joe Biden is facing an international backlash from his own allies after calling for regime change in Russia.

Emmanuel Macron led a chorus of disapproval after the US president’s comments, in which he called Vladimir Putin a “butcher” and insisted the Russian prime minister “cannot stay in power.”

Downing Street said it was up to the Russian people to choose their leader, while Biden’s own secretary of state contradicted the president in an attempt to limit diplomatic fallout.

The president’s emotional speech in Poland on Saturday strained his relationship with Western allies, while fueling the Kremlin’s claim that Russia faces an “existential” threat.

Donald Trump said his successor in the White House was “almost giving” Putin “an incentive” to use nuclear weapons.

A senior US diplomat said Biden had “made a dangerous situation more dangerous” and threatened to “extend the scope and duration” of the conflict.

In his speech, delivered minutes after Russia fired missiles at Lviv, 40 miles from the Polish border, Biden said: “For God’s sake, this man cannot stay in power.”

It is seen as the latest in a series of potentially dangerous missteps in recent weeks.

A month before the war, the 79-year-old president suggested that Russia would face minimal consequences if it limited itself to a “minor incursion”.

Biden suggested last week that NATO would respond “in kind” if the Kremlin deployed chemical weapons. He also called Putin a “war criminal” after quickly changing his mind during an exchange with a reporter.

Over the weekend, he told US troops in Poland they would witness the bravery of Ukrainian soldiers “when you’re there,” forcing the White House to quickly clarify that US soldiers were not being sent to the other side. of the border.

Rebuking his American counterpart, Macron, the French president, said on Sunday: “I think we should do everything to prevent the situation from getting out of control. I would not use these kinds of words because I am still in talks with the president. Putin “.

Macron said the “collective goal” was to stop the war “without escalating things.”

He said that his duty as French president was not to seek regime change, but to “take the diplomatic path to obtain first a ceasefire and then a total withdrawal of troops.”

Antony Blinken, the US secretary of state, contradicted his president at a press conference in Jerusalem: “As you know, and as you have repeatedly heard us say, we do not have a regime change strategy in Russia or anywhere else. another place. for the case. In this case, as in any case, it depends on the people of the country in question. It depends on the Russian people.”

The US envoy to NATO suggested Biden had become emotionally charged after hearing the “heroic stories” of Ukrainian refugees in Poland who had fled Russia’s “brutal war.” Julianne Smith told CNN: “At this point, I think it was a principled human reaction to the stories that he heard that day. But no… the US does not have a policy of regime change in Russia. final point”.

A Downing Street spokesman said regime change was not a policy followed by Boris Johnson, echoing comments made earlier by Nadhim Zahawi. The education secretary said in a television interview that it was “the Russian people who decided how to govern,” adding: “I think the Russian people will decide the fate of Putin and his cronies.”

Trump, who is expected to run for president in 2024, said his successor risked provoking Putin to use nuclear weapons.

“When you corner him and talk like they talk… they’re almost giving him an incentive,” Biden’s predecessor said. The Kremlin spokesman said last week that Russia could use nuclear weapons if faced with an “existential threat”, while analysts say Putin is increasingly seen as the embodiment of the Russian state.

Trump said Biden was forced to apologize “three, four times a day” for mistakes, adding: “We have people who don’t know what they’re doing. And it’s the most dangerous moment in the history of our country, in my opinion.”

Vyacheslav Volodin, chairman of the Duma, Russia’s lower house of parliament, said: “This is how a weak and sick person behaves: psychiatrists will be able to better explain his behavior. American citizens should be ashamed of their president.”

In the US, it was recognized that Mr. Biden had made a serious error in judgement.

Richard Haass, a US diplomat who heads the Council on Foreign Relations, said on Twitter:

Senator James Risch, the top Republican on the US Senate Foreign Relations Committee, said, “Most people who don’t deal in the foreign relations lane don’t realize that those nine words that pronounced would cause the type of eruption that they did. . It’s going to cause a big problem.”

Putin’s invasion remained stalled on Sunday, when his forces lost control of the strategically important town of Trostyanets. Analysts suggested that it was one of the most significant counteroffensive victories of the Ukrainian army so far. The city, 220 miles east of kyiv, had been under Kremlin control since March 1.

Ukraine also claimed to have recaptured Husarivka, a town in the Kharkiv region that had been occupied by two Russian battalion tactical groups.

Russia’s failure to capture kyiv in the first days of the invasion prompted the Kremlin to pursue a new strategy that could leave Ukraine divided like North and South Korea.

Brigadier General Kyrylo Budanov, Ukraine’s defense intelligence chief, said there were reasons to believe that Putin “might try to impose a line of separation between the occupied and unoccupied regions of our country,” adding: “In fact, It will be an attempt to establish South Korea and North Korea in Ukraine.”

Leaders of the so-called Luhansk People’s Republic, a separatist-controlled region in western Ukraine, said on Sunday they would call a referendum to offer the local population a chance to become part of the Russian state.

In an interview with four independent Russian journalists, Volodymyr Zelensky, the Ukrainian president, said that a peace agreement would only be possible if Russian troops withdrew completely from Ukraine.

On Sunday, air raid sirens sounded in various parts of Ukraine, including kyiv and Lviv. Explosions were reported in northwestern Ukraine in Lutsk and at an oil storage facility in Volyn Oblast.

By David Millward, US correspondent

Joe Biden’s tendency to go off script during the crisis has led to a series of mistakes that officials fear could make the crisis worse.

On several occasions, his communications staff had to go into damage control mode trying to “clarify” what the US president said.

Officials have quietly raised concerns about how a volatile and possibly paranoid Vladimir Putin will respond to Biden, who is inadvertently ratcheting up tension with his unwelcome spontaneity.

Joe Biden appeared to give Vladimir Putin the green light to invade, saying Russia would not face devastating sanctions as long as its intervention was only a “minor incursion.”

The ambiguity of his comment, 28 minutes into a press conference in late January, caused alarm.

His exact words were: “Russia will be responsible if it invades. And it depends on what it does. It’s one thing if it’s a minor incursion and we (in NATO) end up having to fight over what to do and what not to do.” yes, etc.”

Asked by a reporter if he was giving permission for a minor incursion, the US president laughed: “Good question. It sounded (like) that, didn’t it?

Earlier this month, Biden caused alarm when he said NATO would “respond in the same way” if Putin resorted to chemical weapons.

His statements flatly contradicted what had been understood as NATO’s strategy, which ruled out engaging the Russians unless one of its members was attacked.

He also contradicted his own earlier comments when he warned that taking on the Russians would trigger World War III.

Addressing members in the US 82North Dakota Airborne Division while in Poland, Biden told them they would witness the bravery of Ukrainians “when you’re there.”

His comment, contrary to earlier assurances that the United States would stay out of the conflict to avoid triggering “World War III,” White House officials went into “clarification” mode, insisting that US troops they would not be deployed in Ukraine.

In mid-March, the US president caught his own officials off guard by suddenly calling Putin a “war criminal.”

His comments were a spontaneous response to a question from the press. Initially asked if Putin was a criminal, but upon doing so he said “no” and then seemed to change his mind.

In an unscripted aside from a keynote address in Poland, Biden said of Putin: “For God’s sake, this man cannot stay in power.”

It set off alarm in Washington, where officials insisted he was not seeking regime change in Moscow, and abroad, where leaders including Emmanuel Macron feared he was inflaming an already volatile situation.

Former President Donald Trump warned that Biden was cornering Putin and warning that he was exacerbating the crisis.