Baby trapped for 24 hours saved moments before drowning in mud 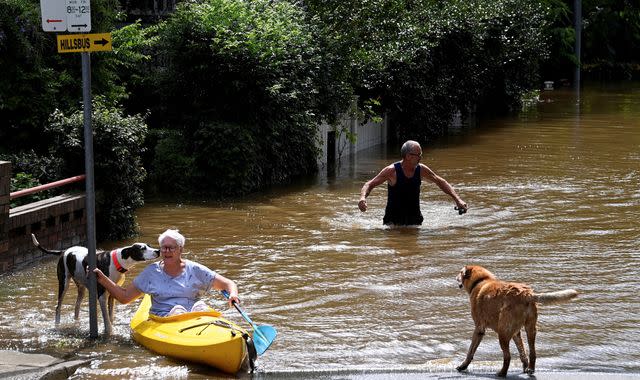 A baby was pulled from the mud and resuscitated by a former Australian Ninja Warrior contestant, more than 24 hours after the catastrophic flood that has devastated New South Wales has surfaced.

Steeplechase runner Lisa Parkes told the Australian weekly The Saturday Paper that she then resuscitated the baby in front of his trapped parents, who were up to their necks in mud.

A national emergency was declared after at least 22 people died and tens of thousands had to evacuate their homes following flooding along the east coast of Australiacaused by heavy rain.

Ms Parkes, a mother of three, was part of a team of professional hikers and climbers searching for survivors in the Northern Rivers region of New South Wales.

They were searching along the Upper Main Arm Valley, about 15 miles (25 km) northwest of Mullumbimby and about 40 miles (70 km) north of Lismore, where mudslides had washed away homes, flooding the area. with mud and trees.

Mrs Parkes said: “There’s no road, it’s just a river. I walked in waist-deep water most of the day.”

Despite being told everyone had been accounted for, he said, his “sixth sense” told him something was wrong.

“I could hear a baby crying,” he said. “And I’m a mom and I said to the person she was with, ‘Look, I’m not too happy to leave yet.'” I could see a house and land slide very high.”

After walking through the bushes next to the landslide and strapping herself to a tree, she was able to descend toward the house, following the baby’s cries.

She recounted: “I could see a baby lying on the mud and about 30 meters or 50 meters away, the parents, the mum and dad, were buried almost up to their necks in the mud and had been there for more than 24 hours. . .

“The baby must have been that age, about eight months, and it was a flawless moment, because he tried to turn over and had mud in his mouth and he was unconscious.”

With both parents trapped and unable to move their arms, he said they were completely powerless to act.
Ms Parkes explained: “I had to clear her airway and resuscitate that baby in the middle of a landslide while hanging from a rope, which I did.”

With emergency help on the way, Ms. Parkes then brought the parents out to reunite them with their baby.

“It must have been, for them, the most horrible thing they’ve ever had having their child in front of them but not being able to hold on to them,” he said.

The family was airlifted to Queensland Children’s Hospital in Brisbane and is believed to have made a full recovery.

There has been criticism of the Australian government’s handling of the disaster, with many victims angry that the authorities did not come to their aid sooner.

Some areas suffered the highest flooding ever recorded and tens of thousands of people had to flee their homes.
While the military stepped in to help, many felt Australian Prime Minister Scott Morrison was slow, offering too little help too late and forcing people to face the disaster alone.

The effect of the heavy rains was made worse by wildfires two years ago, which destroyed many areas of rainforest, leaving the land bare and vulnerable to flooding.