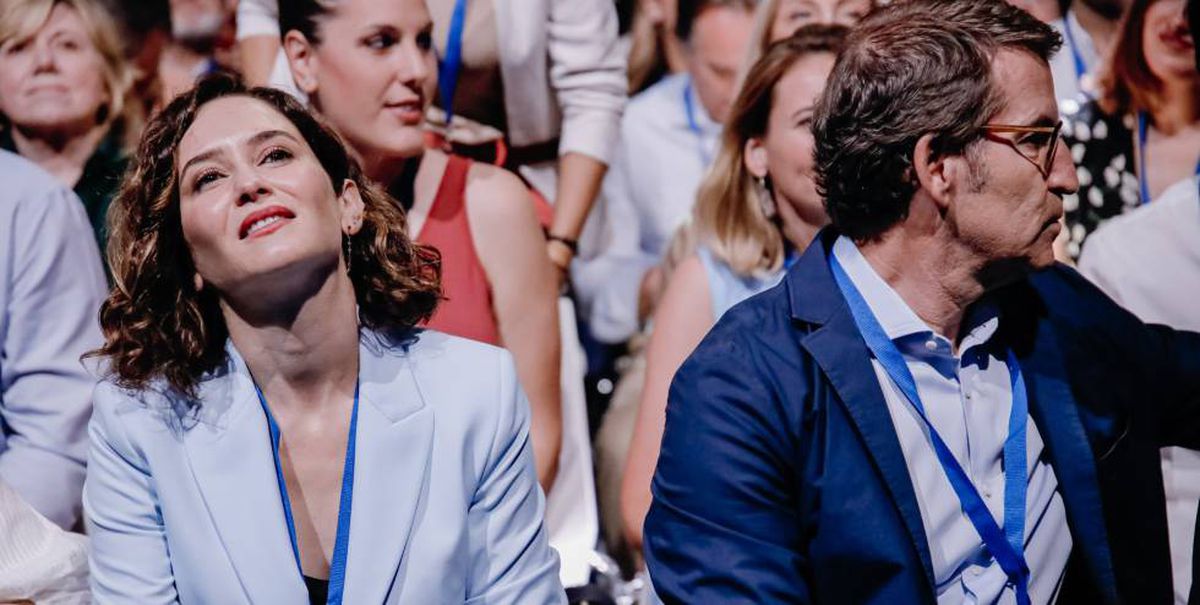 Alberto Núñez Feijóo took up his mandate as leader of the PP last April and promised a new style of opposition, open to agreements with the government: “We must free Spanish politics from confrontation, from permanent exaggeration. My project is an understanding project. I didn’t come to twitch or offend. Moderation is not lukewarm. Dialogue is not submission. Enough forced controversy to create enough problems,” he said. But Isabel Díaz Ayuso blasted this strategy with a harsh tone that transcends the distribution of profiles to attract different voters (on their left and on their right) with which the new leader wanted to exploit the different suits of his deck: the moderation of Juan Manuel Moreno Bonilla – who swept Andalusia – on the one hand and the aggressiveness of the Madrid President on the other. To criticize the government’s energy saving plan, which stems from a request from the European Commission chaired by Ursula von der Leyen (of the European PP), Ayuso on Wednesday compared the executive branch to “totalitarian regimes”.

Popular leaders had warned him, confident that Feijóo would be more skilled than his predecessor; and the President of Madrid herself warned on March 1 before the National Council in which Pablo Casado said goodbye. After several days of stabbing each other live, tweet after tweet, the PP went to the summoned conclave to stage the end of the conflict. The leader’s war with Ayuso had, as the then Galician president explained, caused a “bleed” in the party “with a massive flight of militants” and the operation to shoot down Casado was approached as “an exercise in self-defense”. On that day, the PP Feijóo wanted to convey the news that they had managed to “stabilize” the patient after a few “critical” days. But Ayuso came forward with a change in the overall strategy of the clean sheet, asking to “exclude” those who took part in the “campaign” against them, alluding to Casado and Teodoro García Egea. They didn’t grant it, but he made his intention clear: he would continue to walk alone.

With the leadership of the PP, Feijóo has also inherited some of the problems of his former president. The one feeling worst under the new leadership, as was the case in the previous phase, is what popular cadres have dubbed as “ayusodependence“. From the start, the new leader tries to offer an overarching, moderate profile aimed at scraping votes in the PSOE as well. For this, management capacity had to assert itself over ideology and basically speak of economics. But Ayuso often deflects the argument and the agenda, the issues the party wants to talk about every day, with controversial statements that force the rest of the leadership to clarify whether they share them or not.

This Tuesday, the topic the PP wanted to talk about was the bad unemployment data – affiliates fell in a month of July for the first time in 21 years – but the threat of rejection by the Madrid president with the austerity plan The energy sector of the Government got all the attention. His comments last July, when he lamented having to “hold out a month” at Pride, also felt particularly bad in leadership.

Sánchez says the law is fulfilled in Spain; but it imposes rules that bind only ordinary people, employees, the self-employed and small business owners.

As in totalitarian regimes, it reserves the right to do the opposite of what it asks.

The examples are piling up in just four months of coexistence. To justify allowing high-income couples to receive public grants at private centers, Ayuso said on June 30, “I find it surprising that you can change your gender or have an abortion without your parents and you can’t go around.” Apply for scholarships if your parents have a purchasing power or other. The measure and his statements monopolized the political debate. PP leaders and spokesmen have been asked in successive press conferences whether they support this type of aid. On July 4, Secretary-General Cuca Gamarra supported Ayuso, although none of the popular-governed municipalities did anything similar: “It is a proposal made by a PP president and we support it. It guarantees that everyone can choose a center.” The controversy lingered and dogged Feijóo until an act in Zaragoza on July 8, in which he intended to speak about the economy, warning that another crisis is looming, and himself present as a solution. “It’s the order of the day today,” he even said before the media asked him about the grants.

The party leader responded with a juggling exercise: “First, we must respect the autonomy of a community that has educational powers. I understand that scholarships are a very good social measure for people in economic difficulties and for people who are studying. You can discuss what the reasonable income limit is to get a scholarship. This can always be argued and therefore the discussion is served. Criticizing a government for allowing more grants to be given should be measured criticism, because we are talking about whether they need to cut grants or whether those grants are too generous based on the economic income of those who benefit. It seems like a reasonable discussion to me, but behind this discussion we have to make a decision. Is it good to expand grants to those with incomes, or is it necessary to cut grants to those with lower incomes? This is always controversial and certainly the Autonomous Community of Madrid has its explanations.”

In this eagerness to maintain his own profile, grown after the Casado sacrifice and with a resounding electoral victory behind him, Ayuso made these comments after the first meeting between Feijóo and Pedro Sánchez in La Moncloa, which the former described as “very” cordial ‘, although ‘not very fruitful’: ‘You have to be strong not to get carried away by this totalitarian role in which you are forced to make a speech. I’m destroying Spain, you’re going down the abyss with me, and if you don’t, you’re a sectarian. I have a system of not wasting time or negotiating something that can give me an image as a good manager, but then selling the interests of the people of Madrid. I will not agree with those who are ruining Spain.”

The last example is the rejection of the government’s energy saving plan. Just two weeks ago, Feijóo said a plan to turn down air conditioning in the summer and heating in the winter was “essential” and went beyond the decree by pointing to savings on night lighting. After Ayuso’s tweet, which assured that “Madrid will not run out”, the PP’s general coordinator, Elías Bendodo, described the same measures as “frivolous” and assured that each community is free to apply them or not. Feijóo is silent for the time being, but the first question when he stands in front of a journalist will no longer be about himself, but whether, like the Madrid president, he believes that the decree of the energy saving plan is typical of “totalitarian regimes”.