August could again be very hot and stormy extensive, according to Meteored 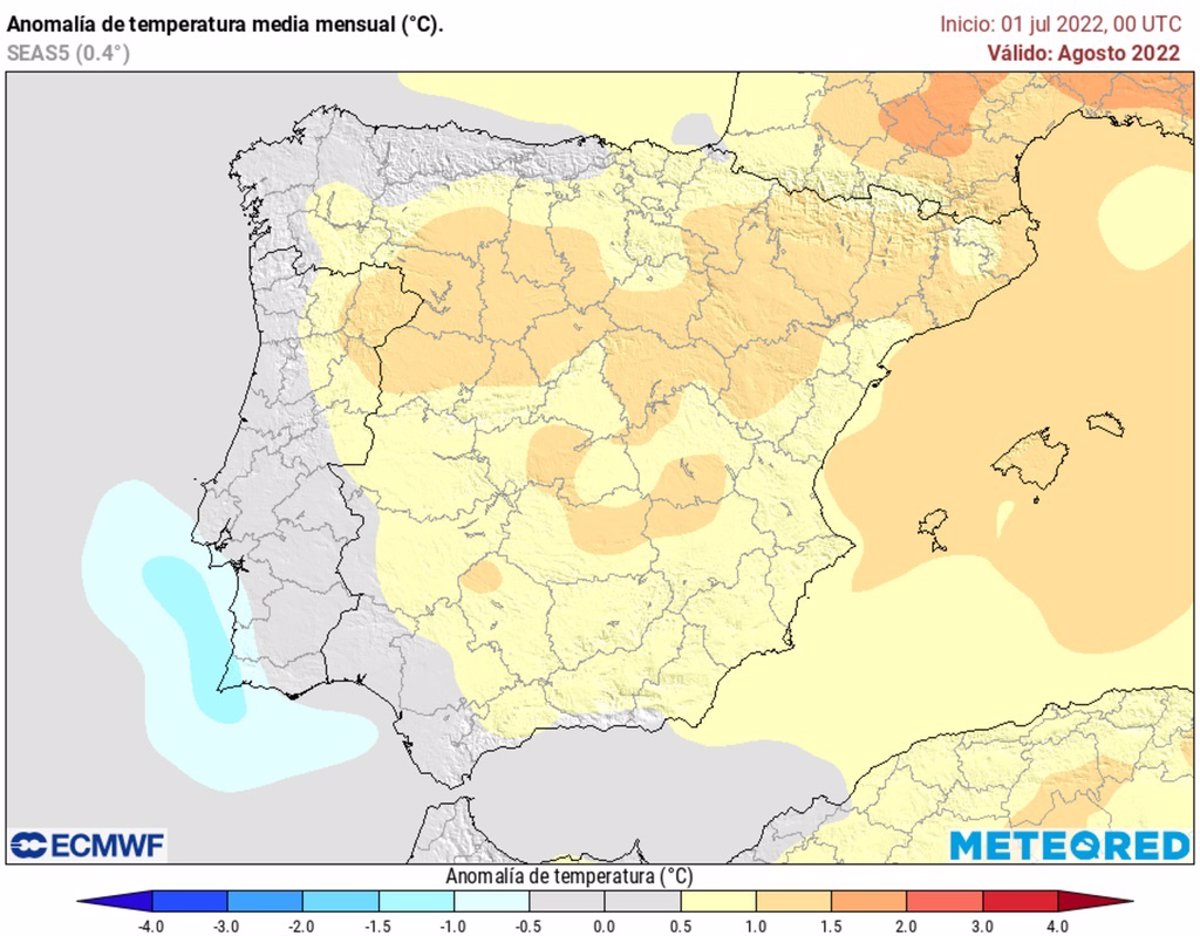 August could be a very hot month, with temperatures higher than normal across most of the peninsula and extremely high readings on the water surface in the Mediterranean, according to meteorologist Samuel Biener, who also predicts a month with storms for a good part of the year territory and with precipitation values ​​around the average.

Despite spending two weeks with an unusual hot spell, the weather forecaster says this wave will be “one of the longest on record”.

According to Meteored’s meteorological model, temperatures will continue to be above normal throughout most of the Peninsula and Balearic Islands during the first half of August, with readings ranging from 0.5 to 1.5 degrees Celsius (ºC) above the average for the data, though short-term maps are already exacerbating these anomalies, he explains.

In addition, on the coast of Galicia, in the extreme south-west, on the south coast and in the Canary Islands, they will have values ​​​​close to the average of the season, although in these points it is usual that it is quite hot in August.

In the second half of the month everything indicates that the same situation will continue, with values ​​close to the average in the north-west, the Cantabrian slope and the Canary archipelago, while in the rest of the regions temperatures will remain unchanged above normal.

Likewise, according to the expert, it is not possible to know so far in advance whether a new heat wave will occur, since certain conditions must be met in order to be considered as such.

As for rainfall, August will be fairly erratic, coupled with violent storms and waterspouts, which Biener says often occur near the Mediterranean coast in the second half of the month.

In addition, rainfall across Spain is expected to be around or slightly below average, although localized storms could alter local rainfall balances in a matter of hours, he explains.

Meteored expert José Miguel Viñas points out that the “scorching” month of July and the heatwave are causing very anomalous warming of the surface waters of the western Mediterranean.

Likewise, Viñas clarifies that a remarkable marine heatwave is taking place, with temperatures exceeding 30 degrees Celsius (ºC) at certain coastal points, resulting in a deviation of up to 6 and 7ºC above the values ​​​​achieved during this time of year.

The expert adds that storing heat in these waters can aggravate the episodes of torrential rains, which are expected to occur at the end of summer and in the first half of autumn, he points out in the meteorological portal.

However, he explains that this scenario will only occur if the appropriate meteorological factors are combined that promote these pre-autumn situations, such as: B. Cold air intakes, DANAS waste and the establishment of a regime of humid easterly winds.