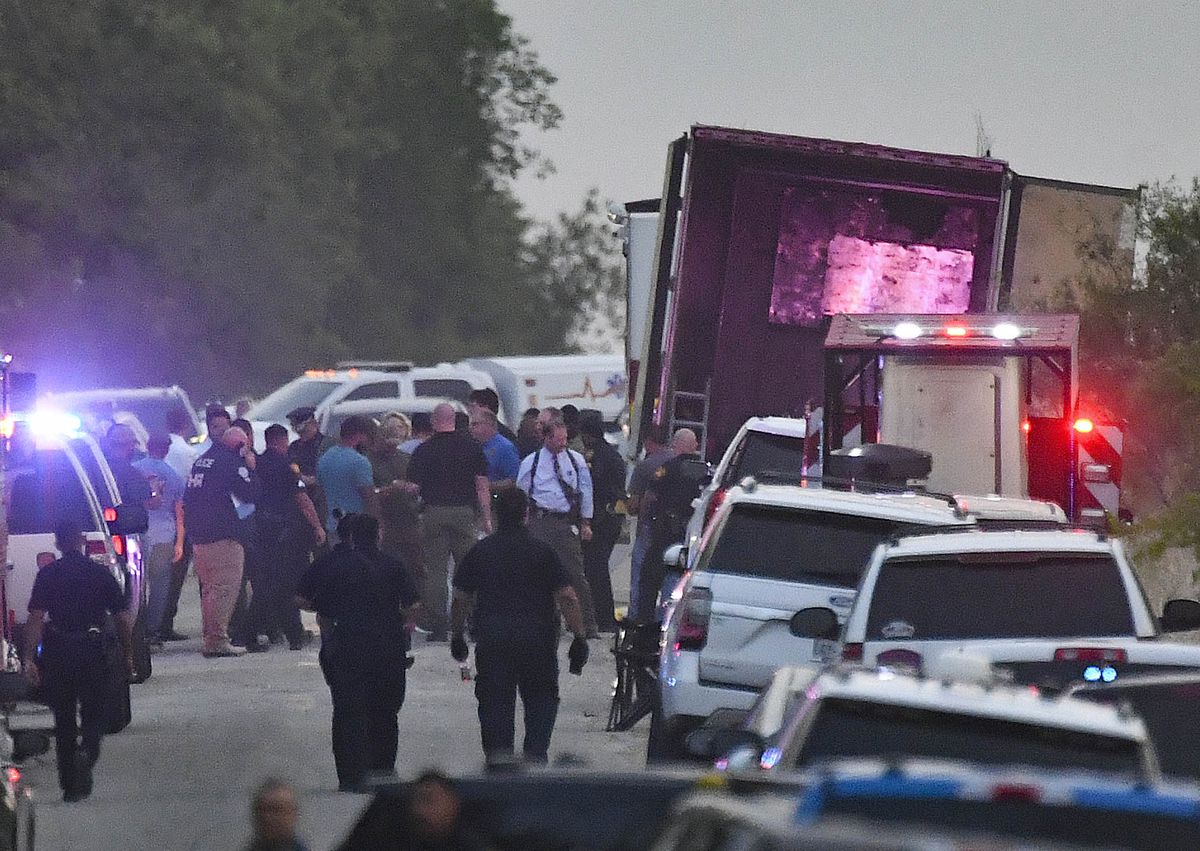 At least 27 of the 51 migrants who died in the Texas tragedy were Mexican. This was announced by the consul in San Antonio, Rubén Minutti, at a press conference on Tuesday. People died of suffocation and suffocation from the heat while riding in the crate of an abandoned trailer. Three of 13 survivors are Mexican nationals and are receiving medical care, according to authorities’ latest preliminary tally, although the number could continue to rise with efforts to find out who the victims are.

The identity of the Mexicans who died and were hospitalized was confirmed by the personal documents they were traveling with, Minutti said. A second check must be carried out using his fingerprints. “We are not sure of the nationality of all of the victims,” ​​Bexar County Commissioner Rebeca Clay-Flores said during a news conference, adding that identification may take several days. Texas authorities said 39 men and 12 women were killed and that 34 people have already been identified.

People who were transferred to hospitals in the region were severely dehydrated, according to information shared by Mexico’s Foreign Minister Marcelo Ebrard in recent hours. One of the Mexicans hospitalized is “very serious,” according to Minutti, who has visited six health clinics to care for the victims. “It is still pending that the authorities report on the 13 patients and their nationality,” said the consul. “In general, hospital staff have indicated that the injured are in critical condition with neurological, liver, kidney failure and internal bleeding,” he added. According to the press and local authorities, it is the greatest migration tragedy on American soil in history. Last December, 57 migrants were killed when a truck overturned in the Mexican state of Chiapas.

In the first hours of the tragedy, which happened on Monday afternoon, the Mexican Foreign Ministry provisionally spoke of 22 dead Mexicans, seven Guatemalans and two Hondurans. The identity of the deceased has yet to go through a fingerprint identification process. For example, three nationals believed to be from Guatemala are in the recognition process: a 22-year-old woman and two men, 31 and 35 years old. The Central American country’s foreign ministry has also granted consular protection to a 23-year-old girl who is being hospitalized at a nearby clinic and remains stable. “Forensic scientists estimate that the bodies will be identified in about three days,” the Guatemalan Foreign Ministry said.

The foreign ministers of Mexico, Guatemala and Honduras have contacted Homeland Security Minister Alejandro Mayorkas and said they will work together to care for the families of the victims. There will also be international cooperation to investigate what happened and share responsibilities. A team from the Attorney General’s Office will travel to the scene of the accident to investigate crimes committed on Mexican territory. “We will work together, Mexico and the United States, to find and punish those responsible for the tragedy,” Ebrard said.

“This is a great misfortune,” lamented President Andrés Manuel López Obrador in his morning press conference. News of the Texas discovery has rocked Mexico, a country that sends, receives and transits migrants. Gov. Miguel Barbosa has said it is likely at least two of the migrants who died were from Puebla state, but did not provide their names. Both were from Izúcar de Matamoros, according to the president, citing the organization Pies Secos. “Let’s follow up on this and if that’s the case, let’s exhaust all institutional avenues for repatriation,” Barbosa said at a news conference.

The National Institute for Migration has announced that it will cover the cost of transporting and guarding the bodies of the deceased in Mexico. Enrique Reina, Honduras’ foreign minister, said his country’s officials have already contacted forensic experts to speed up the identification and repatriation of the bodies. Hondurans are the group with the least information.

Minutti said around 30 Mexican families have contacted the Mexican consular network because they have not heard from loved ones. The authorities of Mexico, the United States, Guatemala and Honduras forecast that the number of victims will increase as the facts become clearer. “It is inexcusable that migrant smuggling continues to kill innocent people,” said Guatemalan President Alejandro Giammattei.

- Advertisement -
Share
Facebook
Twitter
Pinterest
WhatsApp
Previous articlePhilippines. News portal critical of government must close
Next articleSánchez refers to the State of the Union debate in July to explain the attack on the Melilla fence

Illa (PSC) again asks Aragonés to convene the gaming table: “We must open this process”

Spain meets Greece again without time to lick their wounds

The Red Cross claims to be “the most prepared generation in history” to endure “job insecurity” and “exploitation”.